Hermann Balck (7 December 1893 – 29 November 1982) was an officer of the German army who served in both World War I and World War II, rising to the rank of General der Panzertruppe. He was highly decorated, receiving the Knight's Cross of the Iron Cross with Oak Leaves, Swords and Diamonds (German: Ritterkreuz des Eisernen Kreuzes mit Eichenlaub, Schwertern und Brillanten), an award created to recognise extreme battlefield bravery or outstanding military leadership. At the time of its presentation to Balck it was Germany's highest military decoration.[Note 1]

Balck was born in Danzig - Langfuhr, present-day Wrzeszcz in Poland. He was the son of William Balck and his wife Mathilde, née Jensen. Balck was from a family with a long military tradition. His great-grandfather served Britain under the Duke of Wellington in the King's German Legion, and his grandfather was an officer in the British Army's Argyll and Sutherland Highlanders. Balck's father, William Balck, was one of the German army's foremost tactical writers in the years prior to World War I, and as a division commander in that war won the Pour le Mérite, Germany's highest military order. He reached the rank of major general (Generalleutnant)[1]

On 10 April 1913 Balck entered the 10th Rifle (Jäger) Battalion in Goslar as a cadet. From 12 February 1914, he attended the War School (Kriegs-Schule) in Hanover, where he remained until he returned to his unit upon the outbreak of the First World War in August.

Balck served as a mountain infantry officer, and his unit played a key role in the Schlieffen Plan, leading the crossing at Sedan. He ended up fighting on the western, eastern, Italian and Balkan fronts. He served three years as a company commander, and ending the war in command of a machine-gun company. At one point he led an extended patrol that operated independently behind Russian lines for several weeks. Over the course of the war he was wounded seven times and awarded the Iron Cross First Class. Balck was nominated for Prussia's highest honor, the Pour le Mérite, in October 1918, but the war ended before his citation completed processing.[1]

During the interwar period Balck was selected as one of the 4,000 officers to continue on in the military serving in the Reichswehr. He transferred to the 18th Cavalry Regiment in 1922, and remained with that unit for 12 years. Balck twice turned down a post in the Truppenamt or General Staff, the normal path for advancing to high rank in the German army, preferring instead to remain a line officer. 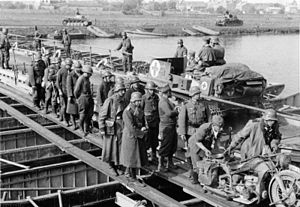 1st Panzer Division crossing a pontoon bridge on the Meuse near Sedan, 1940. 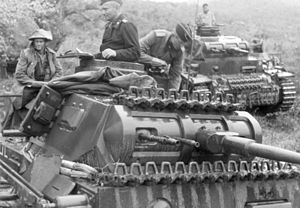 At the outbreak of World War II in 1939, Balck was serving as a staff officer in the Inspectorate of Motorized Troops. His responsibilities lay in refitting and reorganizing the growing panzer forces. In October he was placed in command of one of the panzergrenadier regiments of the 1st Panzer Division (Schützenregiment 1 or Motorized Infantry Regiment 1). During the spring the troops underwent special training in river crossings and bridgehead formation. A common shout was made by the officers to the men "Joyriding in canoes is verboten!", admonishing them to take the training seriously. In May Balck served with distinction during the Battle of France.[2] The 1st Panzer Division made up a part of Guderian's panzer corps. Balck's regiment spearheaded a crossing over the Meuse, and established a bridgehead on the far side. Guderian arrived shortly thereafter and came across in an assault boat. Waiting on the far bank was Balck, who cheerfully shouted out to the General: "Joyriding in canoes on the Meuse is forbidden!".

During the winter of 1940 through the spring of 1941 he commanded Panzerregiment 3, and led this unit during the Battle of Greece. He later commanded the 2nd Panzerbrigade of the same division. He returned to staff duties in the Inspectorate of Armoured Forces in the OKH in July 1941. In May 1942, Balck went to the Eastern Front in command of the 11th Panzer Division in Ukraine and southern Russia. Following the encirclement of the 6th Army at Stalingrad the German southern front faced a generalized collapse. Balck's division was located some 400 miles to the north when he was instructed to move south to stabilize the crumbling front. As the Soviet's threatened a breakthrough across the Dnieper the Russian 5th Tank Army was confronted with the lead units of Balck's 11th Panzer Division. The Soviets commanded a local superiority of 7:1 in tanks, 11:1 in infantry, and 20:1 in artillery. Leading from the front, Balck was able to quickly react to each enemy thrust. He repeatedly parried, surprised, and wiped out superior Soviet detachments. His by word was "Night marches save blood." Through a series of encounters his ability to make use of maneuver allowed his single panzer division to destroy piecemeal the much larger Soviet forces. Over the next few months his division would garner an astonishing one thousand enemy tank kills. For this and other achievements Balck was made one of only twenty-seven officers in the entire war who received the Knight's Cross with Oak Leaves, Swords, and Diamonds.[3]

Following this action he was moved into officer reserve, but immediately thereafter was given command of the Heer's elite unit, Panzergrenadierdivision Grossdeutschland which he led in the defense against and the counterattack at Zhitomir in 1943. After a brief spell in Italy in which he commanded the XIV Panzer Corps, he returned to command the XLVIII Panzer Corps in the eastern front in December 1943, as well as the defense against the Soviet winter/spring offensive in western Ukraine in 1944. In July 1944 Balck commanded the 48th Panzerkorps during the initial phase of the Soviet Lvov-Sandomierz Offensive. Balck was closely involved in the failed defense, and the unsuccessful attempt to relieve the encircled XIII Army Corps at Brody which was destroyed. In August 1944 he assumed command of the 4th Panzer Army.

In September 1944 he was transferred from 4th Panzer Army in Poland to the Western Front to command Army Group G in relief of Generaloberst Johannes Blaskowitz in the Alsace region of France. Balck was unable to stop the Allied advance under General George S. Patton, and in late December he was relieved of command of Army Group G and placed in the officer reserve pool. Army Group G returned to General Johannes Blaskowitz. By the intervention of General Heinz Guderian he was transferred to command the reconstituted 6th Army in Hungary, which also had operational control of two Hungarian armies.

Balck was a POW and remained in captivity until 1947. He declined to participate in the US Army Historical Division's study on the war. After the war Balck found employment as a depot worker. In 1948 he was arrested for murder for the execution of artillery commander Lieutenant-Colonel Johann Schottke. The incident in question occurred while Balck served as commander of Army Group G on the western front. On 28 November 1944 near Saarbrücken Schottke's unit had failed to provide its supportive artillery fire upon its target area. When searched for he was found drunk on duty. Balck held a summary judgment, and Schottke was executed by firing squad. The sentence and execution were conducted without the ordained military tribunal. Balck was found guilty and sentenced to three years. He served half of this sentence before being granted early release.

In the late 1970s and early 1980s Balck teamed with Friedrich von Mellenthin to participate in a number of seminars and panel discussions with senior NATO leaders at the US Army War College in Carlisle, Pennsylvania.

Balck was considered a gifted commander of armored troops, exemplified by his handling of 11th Panzer Division and XLVIII Panzer Corps during 1942-43. In reviewing Balck's command of the division during the Chir River crisis of December 1942, U.S. General William DePuy estimated Balck to have been "perhaps the best division commander in the German Army." A number of the battles Balck directed are described in Panzer Battles, the memoir of Generalmajor Friedrich von Mellenthin, whom he met when Balck's 11th Panzer Division came under the command of the XLVIII Panzer Corps. At the time von Mellenthin was serving as Chief of Staff of the XLVIII Panzer Corps.[1] Von Mellenthin was still serving as Chief of Staff when Balck took over command of the corps, and continued on as Balck's Ia when he transferred to the command of Army Group G.

Balck started the war as an Oberstleutnant (lieutenant-colonel) in 1939 and ended it as a General der Panzertruppe (lieutenant-general of armored troops). Balck was one of only twenty-seven officers in the Wehrmacht to receive the Knight's Cross with Oak Leaves, Swords, and Diamonds.[1] His career was notable for his mastery of maneuver warfare. In his command of panzer forces and rapid rise through the ranks, his experience was similar to the careers of Erwin Rommel and Hasso von Manteuffel.

His career was detailed in contrast to that of Alfred Jodl in Weapons and Hope by Freeman Dyson. Balck's own autobiography is entitled Ordnung im Chaos: Erinnerungen, 1893-1948, an English translation of which has recently become available.