Hermann Hoth (12 April 1885 – 25 January 1971) was an officer in the German military from 1903 to 1945. He attained the rank of Generaloberst during World War II. He fought in France, but is most noted as a panzer commander on the Eastern Front. Hoth commanded the 3rd Panzer Group during Operation Barbarossa in 1941, and the 4th Panzer Army later during the Wehrmacht's 1942 summer offensive. Following the encirclement of the 6th Army in Stalingrad in November 1942, Hoth's panzer army unsuccessfully attempted to relieve it during Operation Wintergewitter. After Stalingrad, Hoth was involved in the Kursk counter-offensive in the summer of 1943 and the Battle of Kiev. The Fourth Panzer Army under his command at Kursk was the largest tank formation ever assembled. Hoth was dismissed from command by Adolf Hitler in 1943, only to be reinstated for a short time during the last weeks of the war. After the war, he served six years in prison for war crimes, and became a writer on military history.

Hoth was born in Neuruppin, the son of an army medical officer. He joined the army in 1903 and at the start of World War I was promoted to Captain and he won both classes of Iron Cross. He remained in the Reichswehr (the armed forces of the Weimar Republic) in the interwar period. Following the reorganization of the German military into the Wehrmacht in 1935, he was promoted to Major-General and appointed to command the 18th Infantry Division.

Hoth was promoted to Lieutenant-General and given command of the XV Motorised Corps from 10 November 1938, leading it in the invasion of Poland the following year. During the invasion of France in May 1940, his panzer corps guarded Guderian's right flank during their dash through the Ardennes, and contained the 5th Panzer Division and Erwin Rommel's 7th Panzer Division. Following the successful conclusion of the campaign Hoth was promoted to Generaloberst on 19 July 1940.

In Operation Barbarossa in 1941, Hoth commanded the Third Panzer Group which captured Minsk and Vitebsk. In October he replaced General Carl-Heinrich von Stülpnagel as commander of the Seventeenth Army in Ukraine. As its commander he called upon his men to understand the need for "harsh punishment of Jewry".[1] His army was driven back by the Russian offensives of early 1942 (see Second Battle of Kharkov).

In June 1942, he took over from General Erich Höpner as commander of Fourth Panzer Army. As part of Operation Blue, the German offensive in southern Russia, the army reached the Don River at Voronezh. Hoth was then ordered to swing south to support the First Panzer Army's crossing of the Don, a move which General Kleist found unhelpful, as the additional panzer army clogged the roads.[Note 1] It then advanced to the north in support of the Sixth Army's attempt to capture Stalingrad. 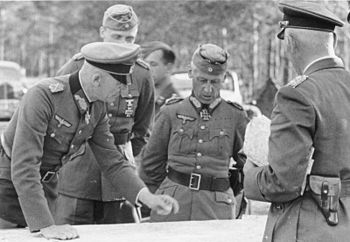 In November 1942, the Soviet winter counteroffensive smashed through the German lines and trapped the Sixth Army in Stalingrad. Hoth's panzer army was the centerpiece of Operation Winter Storm, the attempt to relieve the Sixth Army, under the overall command of Field Marshal Erich von Manstein's Army Group Don. The operation failed, as Soviet reinforcements and worsening weather ground down the German advance. On 25 December, the Soviets resumed their offensive, forcing the Germans back and sealing the fate of the Sixth Army.

In July 1943, Hoth commanded the Fourth Panzer Army in the Battle of Kursk. His divisions, now reinforced by the II SS Panzer Corps, initially penetrated Soviet lines, before being brought to a halt at Prokhorovka. Manstein urged that the attack continue, but the lack of further progress the next day meant that the attacks on Prokharovka were called off.

In the aftermath of Kursk, the Red Army mounted a series of successful offensives that crossed the Dnieper, retook Kiev and pushed the Germans out of eastern Ukraine. Despite his record, Hitler blamed Hoth for part of the losses and relieved him of command.

In April 1945 he was recalled from the officer reserves to active duty and assigned to command the defense of the Harz Mountains, a position he held until the end of the war.

Following the end of the war, Hoth was put on trial at the Subsequent Nuremberg Trials, found guilty of war crimes in the High Command Trial, and on 27 October 1948 sentenced to 15 years in prison. He was released in 1954 and spent his retirement writing. He died on 25 January 1971 in Goslar, where he is buried.

Samuel W. Mitcham, [B. H.] Liddell Hart, and [?] Scherzer works need to be added to Bibliography.