Hero of Belarus (Belarusian: Герой Беларусi; Łacinka: Hieroj Biełarusi; Russian: Герой Беларуси, transliterated Geroy Belarusi) is the highest title that can be bestowed on a citizen of Belarus. The title is awarded to those "who perform great deeds in the name of freedom, independence and prosperity of the Republic of Belarus".[2] The deed can be for military performance, economic performance or great service to the State and society. The design of the medal is similar to that of its predecessor, Hero of the Soviet Union. Similar titles to the Hero of Belarus include the Russian Hero of the Russian Federation and the Ukrainian Hero of Ukraine. Since its creation, the title has been awarded to ten people.

The title and other Belarusian state awards, their creation, nomination and awarding, are regulated by a set of legal documents: Belarusian Constitution, Law N 288-З "About state awards of the Republic of Belarus" and presidential decrees.

The title was created by the Belarus Supreme Soviet on April 13, 1995, with the passage of Resolution N 3726-XII, titled "System of State Awards for the Republic of Belarus". Alongside the Hero of Belarus title, the resolution authorized the creation of medals, orders, and titles that can be presented by the Belarusian government. The creation of the awards was a way to honor those who have made valuable contributions to Belarus, irrespective of whether they were performed by a citizen or a foreigner.[3]

To be considered for title, a person must perform a deed that greatly benefits the state and Belarusian society at large. The title can be awarded to those serving in the military, public service or private enterprise. It can only be awarded once to an individual, and can be awarded posthumously. The official criteria are stated in Chapter 2, Article 5 of Law N 288-З.[2] Chapter 3, Article 60 of Law N 288-З allows any group (association) of workers to submit a recommendation (petition) for an individual to be awarded the title. Governmental bodies, the National Assembly, the Council of Ministers, cabinet officials and public unions, among others, are also eligible to submit nominations for the title. The candidate is evaluated, and if deemed worthy, the nomination is forwarded to the Council of Ministers and then, after having been allowed by the Governmental Secretariat of the Belarusian Security Council, to the President of the Republic.[2]

Now this question is regulated by Law of the Republic of Belarus under June 14, 2007 N 239-З "About social privileges, rights and guarantees to a definite category of citizens".[7]

According to it, Heroes of Belarus have rights:

The consumptions, connected with these privileges, are financed from means of republican and local budgets and of governmental social insurance.

The recipient of the title is given a medal called the Medal of the Hero of Belarus (Belarusian: медаль Героя Беларусі, Russian: медаль Героя Беларуси). The star and suspension are made of gold, and thus it is nicknamed "Gold Star", as was its predecessor, the Hero of the Soviet Union. The star has a total diameter of 33 millimeters, and is attached to a rectangular suspension device (boot tree). In the center of the rectangle is a ribbon of two sections of red and one section of green. The red and green bars on the ribbon evoke the design and colors of the national flag. The amount of gold is set at 585-1 Test, with the total weight of the medal being 19 grams.[8] The present design was enacted into law by Presidential Decree Number 516 on September 6, 1999.[9]

The design of the medal is modeled after one used for the Hero of the Soviet Union. Unlike the Hero of the Soviet Union, Hero of Socialist Labor and the Hero of the Russian Federation titles, there is no engraving on the reverse of the star. The ribbon also copies the Soviet Hero medal's ribbon, since a flag design was also used to make the ribbon of that medal. The medal is always worn in full on the left side of the breast above all other medals and orders. Chapter 4, Article 69 of Law N 288-З states that any awards and titles presented by the Soviet Union and the Byelorussian SSR must be placed after awards from the Republic of Belarus.[2] The same one can reed in the Presidential decree N 168 on April 8, 2005.[10]

When the title was created, a suggested medal was drafted and designed by the government. The major difference between this medal and the current medal is the design of the suspension and the star medallion at the bottom: the top suspension is longer than the bottom, and the bottom star is outlined differently and is adorned with rubies. The suspension was made from gold-plated silver, while the suspension of the current medal is made from gold, as the medal. The design of the star evokes the Marshal's Star, which Soviet Marshals wore around their necks. This medal was adopted by Presidential Decree Number 26 on May 15, 1996.[11][12]

The first award in history was given to Uladzimir Karvat (posthumous) in 1996. The first "group awarding" took place on June 30, 2001 to Pavel Mariev, Mikhail Karchmit, Vital Kramko and Alaksandar Dubko (posthumous),[13] while Kirill Vakhromeev, Mikhail Savicki, Mikhail Vysotsky, Piotr Prokopovich and Vasily Revyako were presented their titles on March 1, 2006.[14]

Uladzimir Karvat, a military pilot, was flying his training aircraft Sukhoi Su-27p on May 23, 1996. The plane caught fire and Karvat was ordered to eject to safety. Unknown to the ground crew, the plane would have crashed in an area full of civilians. Seeing the civilians on the ground, Karvat steered the plane away until it crashed one kilometer from the Brest Voblast settlements of Arabawshchyna and Vyalikaye Hatsishcha, killing him instantly. President Alexander Lukashenko issued Decree Number 484 on November 21, 1996, which posthumously awarded Karvat the title Hero of Belarus.[15][16] The crash site has been converted to a memorial for Karvat, where a copy of Lukashenko's decree is on the tail fin of the Sukhoi Su-27p.[17]

Vital Kramko and Mikhail Karchmit were awarded for their work in the agriculture industry. Kramko is the chairman of the Hrodna Voblast agricultural collective "October", while Karchmit was the director of the Minsk Voblast cooperative "Snov" until his death in 2004.[19][20]

Alaksandar Dubko was posthumously awarded the hero title for his long service to the Belarusian and Soviet governments.[14][21]

Kirill Vakhromeev, the current Metropolitan of Minsk and Slutsk, the Patriarchal Exarch of All Belarus, was awarded the hero title for his work to restore spirituality among the Belarusian population.[22]

Mikhail Savicki was awarded the hero title for his long contributions to the Belarusian arts and for helping to set up art academies in the republic.[23]

Mikhail Vysotsky was awarded for running the research enterprise "Belavtotraktorostroyeniye", a part of the National Academy of Sciences.[23]

Piotr Prokopovich was awarded for his work as the chairman of the National Bank of Belarus.[23]

Darya Domracheva was awarded for her progress in biathlon after The Olympic Games in Sochi, where Darya won 3 gold medal in personal starts. 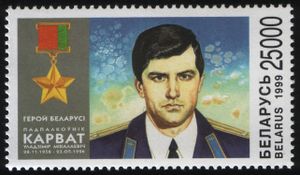 The hero title was also featured in a set of stamps released by BELPOST in December 2006, depicting the state awards of Belarus. On the first issue card, the medal is displayed in full color next to drawings of the state emblem, state flag and the Presidential Palace. A first day postal marking from Minsk also uses an outline of the medal, which is adorned with wreaths and the text "National Decorations of the Republic of Belarus" written in the Belarusian language.

Another set of stamps, devoted to orders and medals of Belarus, was put into circulation by Ministry of communication and informatization of Belarus in August 2008. The designers are Ivan Lukin and Oleg Gaiko. The printing is offset and full-color. Paper is chalk-overly and rubberized. The size of stamps are 29,6х52 mm.[26]

Television channel "CTV (Minsk)" released a film, devoted to the Heroes of Belarus.[27]