From Infogalactic: the planetary knowledge core
Jump to: navigation, search
Not to be confused with Hepatology. 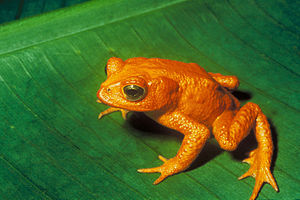 Herpetology (from Greek 'herpien' meaning 'to creep') is the branch of zoology concerned with the study of amphibians (including frogs, toads, salamanders, newts, and caecilians (gymnophiona) and reptiles (including snakes, lizards, amphisbaenids, turtles, terrapins, tortoises, crocodilians, and the tuataras). Batrachology is a further subdiscipline of herpetology concerned with the study of amphibians alone.

Herpetology is concerned with poikilothermic, ectothermic tetrapods. Under this definition "herps" (or sometimes "herptiles" or "herpetofauna") exclude fish, but it is not uncommon for herpetological and ichthyological scientific societies to "team up", publishing joint journals and holding conferences in order to foster the exchange of ideas between the fields. One of the most prestigious organizations, the American Society of Ichthyologists and Herpetologists, is an example of this. Many herpetological societies exist today, having been formed to promote interest in reptiles and amphibians both captive and wild. 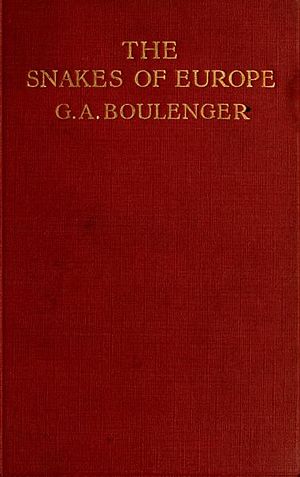 Cover of the book The Snakes of Europe, one of the first academic texts about snakes.

Herpetology offers benefits to humanity in the study of the role of amphibians and reptiles in global ecology, especially because amphibians are often very sensitive to environmental changes, offering a visible warning to humans that significant changes are taking place. Some toxins and venoms produced by reptiles and amphibians are useful in human medicine. Currently, some snake venom has been used to create anti-coagulants that work to treat stroke victims and heart attack cases.

The word "herpetology" is from Greek: ἑρπετόν, herpeton, "creeping animal" and -λογία, -logia, "knowledge". People with an avid interest in herpetology and who keep different reptiles or amphibians often refer to themselves as "herpers".[1]

Career options in the field of herpetology include, but are not limited to lab research, field studies and survey, zoological staff, museum staff and college teaching.

In modern academic science, it is rare for individuals to consider themselves a herpetologist first and foremost. Most individuals focus on a particular field such as ecology, evolution, taxonomy, physiology, or molecular biology, and within that field ask questions pertaining to or best answered by examining reptiles and amphibians. For example, an evolutionary biologist who is also a herpetologist may choose to work on an issue such as evolution of warning coloration in coral snakes.

Most colleges or universities do not offer a major in herpetology at the undergraduate or even the graduate level. Instead, persons interested in herpetology select a major in the biological sciences. The knowledge learned about all aspects of the biology of animals is then applied to an individual study of herpetology.