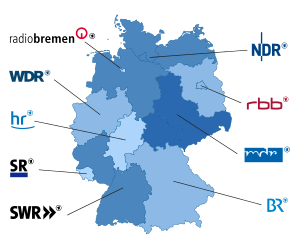 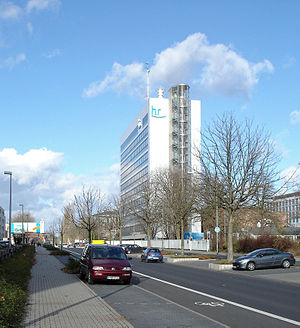 Hessischer Rundfunk (Hessian Broadcasting Corporation; hr) is the public broadcaster for the German state (Bundesland) of Hesse. The main offices of hr are in Frankfurt am Main. hr is a member of the ARD.

The main radio and television studios for hr are located at Bertramstraße 8, Frankfurt am Main. There are additional radio and television studios in Kassel and Wiesbaden, and additional radio studios in Darmstadt, Fulda and Gießen. hr also has offices in Berlin, Eltville, Erbach, Limburg an der Lahn and Marburg. In 2000, hr opened studios on the 53rd floor of the Main Tower in the city centre of Frankfurt. hr is also responsible for the ARD Studios in Madrid and Prague.

Licensing fees are currently €17.50 per month. Since 2013, this amount has to be paid by every household, even if there are no radio or TV receivers present. These fees are not collected directly by the hr but by the Beitragsservice that is a common organisation of ARD, its members, ZDF and Deutschlandradio.

Like other regional public broadcasting networks in Germany, hr has its own "Channel Three" programming. From 1964 until 1983 it was called 'Hessisches Fernsehprogramm' ("Hessian television programme") and from 1983 until 1997 it was called 'Hessen Drei' ("Hesse Three"). In 1997 it was renamed to 'hessen fernsehen' ("hesse television"), and most recently, in October 2004 it was renamed 'hr-fernsehen' (hr-television). Since December 2013 the channel is also available in HDTV.[1]

hr1 plays almost exclusively middle of the road and easy listening music, chiefly from the 1965 to 1985 era, and is aimed at a 40- to 60-year-old demographic. Until 2004 hr1 had been hr's main information channel.

hr3 is an adult-oriented popular music programme. Relaunched in the early 80s as a service targeted principally at young people, the station has aged together with its audience.

hr4 is aimed at an older listenership. It broadcasts regional news and German popular music (schlagers) and "evergreens", as well as instrumental music, folk, and light classical music.

hr-iNFO is 24-hour news radio. At weekends, it broadcasts special in-depth-reports on a range of topics.

YOU FM is hr's music programme for young people. It has also become famous outside of Hessen and Germany for its Saturday night techno music transmissions. 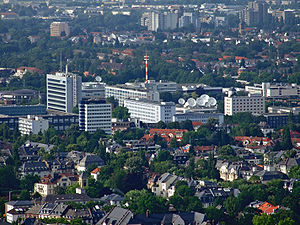 Hessischer Rundfunk with ARD-Sternpunkt in Frankfurt

Each of hr's six radio channels is streamed online.[2]