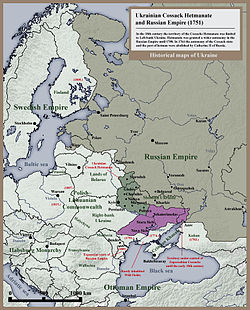 Historical map of Cossack Hetmanate and territory of Zaporozhian Cossacks under rule of Russian Empire (1751).

Hetman of Zaporizhian Cossacks as a military title was not officially recognized internationally until the creation of the Cossack Hetmanate. With the creation of Registered Cossacks units their leaders were officially referred to as hetmans of His Royal Mercy of Zaporishian Host. Before 1648 and the establishment of Cossack Hetmanate there were numerous regional hetmans across the Dnieper-banks, who usually were starostas or voivodes.

The first widely recognized hetman of Zaporizhia was Dmytro Vyshnevetsky, however later several Polish starostas were added to the Hetman registry such as Lyantskoronsky and Dashkevych who also led their own cossack formations. According to Hrushevsky they were not really considered as hetman, at least by their contemporaries. Among other such starostas were Karpo Maslo from Cherkasy, Yatsko Bilous (Pereyaslav), Andrushko (Bratslav), and many others. Even Princes Konstanty Ostrogski and Bohdan Hlinski were conducting Cossack raids on Tatar uluses (districts).

The commanders of Zaporozhian Host (the Kosh) often considered as hetmans in fact carried a title of Kosh Otaman. As from 1572[1] hetman was unofficially name commanders of the Registered Cossack Army (Ukrainian: Козаки реєстрови, Polish: Kozacy rejestrowi, Russian: Казаки реестровые) of the Polish-Lithuanian Commonwealth. From the 1648 Bohdan Khmelnytsky uprising, Hetman was the title of the head of the Cossack state, the Cossack Hetmanate. Cossack hetmans had very broad powers and acted as supreme military commanders and executive leader (by issuing administrative decrees).

After the split of the territory of today Ukraine along the Dnieper River by the Polish-Russian Treaty of Andrusovo 1667, there was an introduction of dual leadership for each bank, or for each Ukraine of Dnieper (left and right). After Treaty of Andrusovo were two different Cossack Hetmanates with two Hetmans. In Poland was a title of Nakazoy Hetman of His Royal Mercy of Zaporishian Host and in Russia was a title of Hetman of His Tsar's Mercy of Zaporishian Host.

Eventually the official state powers of Cossack Hetmans were gradually diminished in the 18th century, and finally abolished by Catherine II of Russia in 1764.

For more details on this topic, see Hetman of Zaporizhian Host.

Some historians among which is Mykola Arkas[5] question legitimacy of the Teteria's elections accusing the later in corruption.[6] Also some sources claim election of Teteria being taken place in January of 1663.[7] The election of Teteria led to the Povoloch Regiment Uprising in 1663, followed by bigger number of unrest in the modern region of Kirovohrad Oblast as well as Polesie (all in the Right-bank Ukraine).[8] Moreover, the political crisis that followed the Pushkar–Barabash Uprising divided the Cossack Hetmanate completely on both bank of Dnieper River.[8] Coincidentally, on January 10, 1663 the Tsardom of Muscovy created the new Little Russian Office (Prikaz) within its Ambassadorial Office.

Vouched by Charles Marie François Olier, marquis de Nointel, Yuriy Khmelnytsky was freed from the Ottoman captivity, appointed and along with Pasha Ibragim was sent to Ukraine fight the Moscow forces of Samoilovych and Romadanovsky. In 1681 Mehmed IV appointed George Ducas the Hetman of Ukraine, replacing Khmelnytsky.

Following the anathema on Mazepa and the election of Ivan Skoropadsky, Cossack Hetmanate was included into the Russian Government of Kiev in December 1708. Upon the death of Skoropadsky, the Hetman elections were disrupted and were awarded as a gift and a type of princely titles, first to Moldavian nobleman and later to the Russian Empress favorite.

On 5 April 1710 the council of cossacks, veterans of the battle at Poltava, elected Pylyp Orlyk as the Hetman of Ukraine in exile. Orlyk waged a guerrilla warfare at the southern borders of the Russian Empire with the support from Ottoman and Swedish empires.