Hieratic (Greek ἱερατικά hieratika; literally "priestly") is a cursive writing system used in the provenance of the pharaohs in Egypt and Nubia. It developed alongside cursive hieroglyphs,[1] to which it is separate[dubious – discuss] yet intimately related. It was primarily written in ink with a reed brush on papyrus, allowing scribes to write quickly without resorting to the time-consuming hieroglyphs.

In the 2nd century AD, the term hieratic was first used by Saint Clement of Alexandria.[2] It derives from the Greek phrase γράμματα ἱερατικά (grammata hieratika; literally "priestly writing"), as at that time, hieratic was used only for religious texts, as had been the case for the previous thousand years.

Hieratic can also be an adjective meaning "[o]f or associated with sacred persons or offices; sacerdotal."[3]

In the Proto-Dynastic Period of Egypt, hieratic first appeared and developed alongside the more formal hieroglyphic script. It is an error to view hieratic as a derivative of hieroglyphic writing. Indeed, the earliest texts from Egypt are produced with ink and brush, with no indication their signs are descendants of hieroglyphs. True monumental hieroglyphs carved in stone did not appear until the 1st Dynasty, well after hieratic had been established as a scribal practice. The two writing systems, therefore, are related, parallel developments, rather than a single linear one.[1]

Hieratic was used throughout the pharaonic period and into the Graeco-Roman Period. Around 660 BC, the Demotic script (and later Greek) replaced hieratic in most secular writing, but hieratic continued to be used by the priestly class for several more centuries, at least into the 3rd century AD. 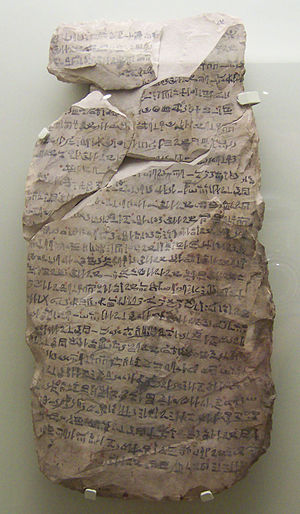 One of four official letters to vizier Khay copied onto fragments of limestone (an ostracon).

Through most of its long history, hieratic was used for writing administrative documents, accounts, legal texts, and letters, as well as mathematical, medical, literary, and religious texts. During the Græco-Roman period, when Demotic (and later Greek) had become the chief administrative script, hieratic was limited primarily to religious texts. In general, hieratic was much more important than hieroglyphs throughout Egypt's history, being the script used in daily life. It was also the writing system first taught to students, knowledge of hieroglyphs being limited to a small minority who were given additional training.[4] In fact, it is often possible to detect errors in hieroglyphic texts that came about due to a misunderstanding of an original hieratic text.

Most often, hieratic script was written in ink with a reed brush[5] on papyrus, wood, stone or pottery ostraca. Thousands of limestone ostraca have been found at the site of Deir al-Madinah, revealing an intimate picture of the lives of common Egyptian workmen. Besides papyrus, stone, ceramic shards, and wood, there are hieratic texts on leather rolls, though few have survived. There are also hieratic texts written on cloth, especially on linen used in mummification. There are some hieratic texts inscribed on stone, a variety known as lapidary hieratic; these are particularly common on stelae from the 22nd Dynasty.

During the late 6th Dynasty, hieratic was sometimes incised into mud tablets with a stylus, similar to cuneiform. About five hundred of these tablets have been discovered in the governor's palace at Ayn Asil (Balat),[6] and a single example was discovered from the site of Ayn al-Gazzarin, both in the Dakhla Oasis.[7][8] At the time the tablets were made, Dakhla was located far from centers of papyrus production.[9] These tablets record inventories, name lists, accounts, and approximately fifty letters. Of the letters, many are internal letters that were circulated within the palace and the local settlement, but others were sent from other villages in the oasis to the governor.

Exercise tablet with hieratic excerpt from The Instructions of Amenemhat. Dynasty XVIII, reign of Amenhotep I, c. 1514–1493 BC. Text reads: "Be on your guard against all who are subordinate to you ... Trust no brother, know no friend, make no intimates."

Hieratic script (unlike cursive hieroglyphs)[dubious – discuss] always reads from right to left. Initially, hieratic could be written in either columns or horizontal lines, but after the 12th Dynasty (specifically during the reign of Amenemhat III), horizontal writing became the standard.

Hieratic is noted for its cursive nature and use of ligatures for a number of characters. Hieratic script also uses a much more standardized orthography than hieroglyphs; texts written in the latter often had to take into account extra-textual concerns, such as decorative uses and religious concerns that were not present in, say, a tax receipt. There are also some signs that are unique to hieratic, though Egyptologists have invented equivalent hieroglyphic forms for hieroglyphic transcriptions and typesetting.[10] Several hieratic characters have diacritical additions so that similar signs could easily be distinguished. Particularly complicated signs could be written with a single stroke.

Hieratic is often present in any given period in two forms, a highly ligatured, cursive script used for administrative documents, and a broad uncial bookhand used for literary, scientific, and religious texts. These two forms can often be significantly different from one another. Letters, in particular, used very cursive forms for quick writing, often with large numbers of abbreviations for formulaic phrases, similar to shorthand.

A highly cursive form of hieratic known as "Abnormal Hieratic" was used in the Theban area from the second half of the 20th dynasty until the beginning of the 26th Dynasty.[11] It derives from the script of Upper Egyptian administrative documents and was used primarily for legal texts, land leases, letters, and other texts. This type of writing was superseded by Demotic—a Lower Egyptian scribal tradition—during the 26th Dynasty, when Demotic was established as a standard administrative script throughout a re-unified Egypt.

Hieratic has had influence on a number of other writing systems. The most obvious is that on Demotic, its direct descendant. Related to this are the Demotic signs of the Meroitic script and the borrowed Demotic characters used in the Coptic alphabet and Old Nubian.

Outside of the Nile Valley, many of the signs used in the Byblos syllabary were apparently borrowed from Old Kingdom hieratic signs.[12] It is also known that early Hebrew used hieratic numerals.[13]

While Egyptian hieroglyphs were typeset into fonts at an early date and the typeset used has become quite standard, hieratic, being a cursive writing system, has proven difficult to typeset; nor has there been any practical need for such a typeset as each manuscript is unique, something a single font could never accommodate. Furthermore, hieratic ductus can vary significantly between regions, and certainly between chronological periods. For this reason, within academic Egyptological publications, it is deemed far more expedient to publish hieratic texts as photographs, often with a drawing of the text for clarity, and a transcription into standard hieroglyphs.

Nevertheless, in 1997, Sheldon Gosline, while at the Institute for the History of Ancient Civilizations, devised a new approach to analyzing Egyptian hieratic via breaking up the component parts of each sign into brush strokes. His approach was inspired by the traditional approach to organizing Chinese scripts. The first publication that introduced this new approach presented part of a Late Egyptian text as a teaching exercise.[14] Soon after, Prof. Gosline founded the Hieratic Font Project and released the first in a series of reference works on hieratic.[15]

There are several goals of the Hieratic Font Project: to make the study of cursive Egyptian script more attainable, to provide a tool for script analysis and comparison, and to generate a representative set of fonts to represent hieratic script in publications. The fonts produced to date can already reproduce a wide range of handwriting styles. There are twelve basic brush strokes and the same number of related turning traces, thus each sign can be reduced to a numeric code, which also serves to describe the most likely brush stroke sequence. This illustration shows two versions of the same text. The most recent publication is concerned with Late Egyptian Letters.[16]

At the present time, beyond Gosline himself, neither his stroke analysis nor hieratic fonts are used to any appreciable level within academic Egyptology.

The Unicode standard considers hieratic characters' font variants of the Egyptian hieroglyphs, and the two scripts have been unified.[17] Hieroglyphs themselves were added to the Unicode Standard in October 2009 with the release of version 5.2. To date, there is no known Unicode font with hieratic.