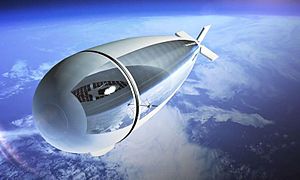 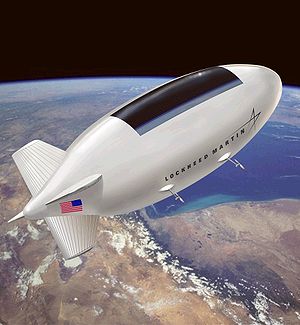 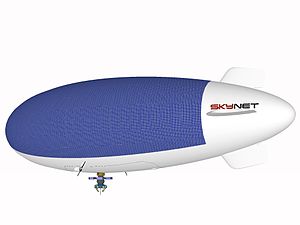 High altitude platform station (short: HAPS) is – according to Article 1.66A of the International Telecommunication Union´s (ITU) ITU Radio Regulations (RR)[2] – defined as «A station on an object at an altitude of 20 to 50 km and at a specified, nominal, fixed point relative to the Earth.»

Each station shall be classified by the service in which it operates permanently or temporarily.

Limitation due to power

A HAP can be a manned or unmanned airplane, a balloon, or an airship. All require electrical power to keep themselves and their payload functional. While current HAPS are powered by batteries or engines, mission time is limited by the need for recharging/refueling. Therefore, alternative means are being considered for the future. Solar cells are one of the best options currently being used under trial for HAPS (Helios, Lindstrand HALE).[3] 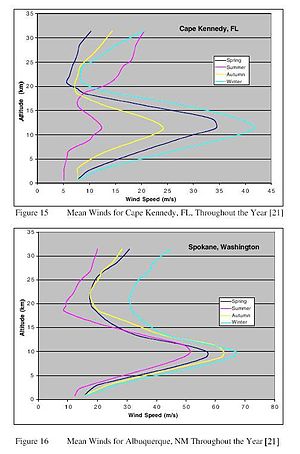 Wind Profile variation with Altitude showing minimum wind speeds between 17 and 22 km altitude. (Although the absolute value of the wind speed will vary with Altitude, the trends (shown in these figures) are similar for most locations.) Source. NASA

Whether an airship or an aeroplane, a major challenge is the ability of the HAP to maintain stationkeeping in the face of winds. An operating altitude between 17 and 22 km is chosen because in most regions of the world this represents a layer of relatively mild wind and turbulence above the jet stream. Although the wind profile may vary considerably with latitude and with season, a form similar to that shown will usually obtain. This altitude (> 17 km) is also above commercial air-traffic heights, which would otherwise prove a potentially prohibitive constraint.[4]

Since HAPS operate at much lower altitudes than satellites, it is possible to cover a small region much more effectively. Lower altitude also means much lower telecommunications link budget (hence lower power consumption) and smaller round trip delay compared to satellites. Furthermore, deploying a satellite requires significant time and monetary resources, in terms of development and launch. HAPS, on the other hand, are comparatively less expensive and are rapidly deployable. Another major difference is that a satellite, once launched, cannot be landed for maintenance, while HAPS can.[5]

One of latest uses of HAPS has been for radiocommunication service. Research on HAPS is being actively carried largely in Europe, where scientists are considering them as a platform to deliver high speed connectivity to users, over areas of up to 400 km. It has gained significant interest because HAPS will be able to deliver bandwidth and capacity similar to a broadband wireless access network (such as WiMAX) while providing a coverage area similar to that of a satellite.

High altitude airships can improve the military’s ability to communicate in remote areas such as those in Afghanistan, where mountainous terrain frequently interferes with communications signals.[6]

One of the best examples of a high-altitude platform used for surveillance and security is Northrop Grumman RQ-4 Global Hawk UAV used by the US Air Force. It has a service ceiling of 20 km and can stay in the air for continuous 36 hours. It carries a highly sophisticated sensor system including radar, optical, and infrared imagers. It is powered by a turbofan engine and is able to deliver digital sensor data in realtime to a ground station.[7]

Real-time monitoring of a region

Another future use which is currently being investigated is monitoring of a particular area or region for activities such as flood detection, seismic monitoring, remote sensing and disaster management.[8]

Perhaps the most common use of high-altitude platforms is for environment/weather monitoring. Numerous experiments are conducted through high-altitude balloons mounted with scientific equipment, which is used to measure environmental changes or to keep track of weather. Recently, NASA in partnership with The National Oceanic and Atmospheric Administration (NOAA), has started using Global Hawk UAV to study Earth's Atmosphere.[9]

As a rocket launch platform

For more details on this topic, see Rockoon.

Due to the height more than 90% of atmospheric matter is below the high altitude platform. This reduces atmospheric drag for starting rockets. "As a rough estimate, a rocket that reaches an altitude of 20 km when launched from the ground will reach 100 km if launched at an altitude of 20 km from a balloon."[10] Such a platform has been proposed to allow the usage of (long) mass drivers for launching goods or humans into orbit.[11]

An unmanned lighter-than-air vehicle, the HAA was proposed to operate at a height of above 60,000 feet (18,000 m) in a quasi-geostationary position to deliver persistent orbital station keeping as a surveillance aircraft platform, telecommunications relay, or a weather observer. They originally proposed to launch their HAA in 2008. The airship would be in the air for up to one month at a time and was intended to survey a 600-mile (970 km) diameter of land. It was to use solar cells to provide its power and would be unmanned during its flight. The production concept would be 500 feet (150 m) long and 150 feet (46 m) in diameter. To minimize weight. it was to be composed of high strength fabrics and use lightweight propulsion technologies.

A subscale demonstrator unit for this project, the "High Altitude Long Endurance-Demonstrator" (HALE-D),[6] was built by Lockheed Martin and launched on a test flight on July 27, 2011 to demonstrate key technologies critical to the development of unmanned airships. The airship was supposed to reach an altitude of 60,000 feet (18,000 m), but a problem with the helium levels[13] occurred at 32,000 feet (9,800 m) which prevented it from reaching its target altitude, and the flight was terminated. It descended and landed at a speed of about 20 feet per second[13] in a heavily forested area in Pennsylvania.[14] Two days after the landing, before the vehicle was recovered from the crash site, the vehicle was destroyed by fire.[15]

A stratospheric airship is a powered airship designed to fly at very high altitudes 30,000 to 70,000 feet (9.1 to 21.3 kilometres). Most designs are remote operated aircraft/unmanned aerial vehicles (ROA/UAV). To date none of these designs have received approval from the FAA to fly in U.S. airspace.

Stratospheric airship efforts are being developed in at least five countries.[16]

Japan[19] and South Korea are also planning to deploy HAA's. South Korea has been conducting flight tests for several years with a vehicle from Worldwide Aeros.[20]