listen) is a city in Lower Saxony, Germany with almost 100,000 inhabitants. It is located in the district of Hildesheim, about 30 km southeast of Hanover on the banks of the Innerste River, which is a small tributary of the Leine River. 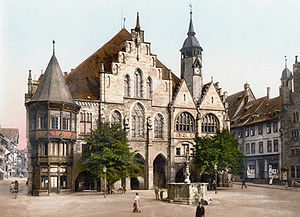 Hildesheim, one of the oldest cities in Northern Germany, became the seat of the Bishopric of Hildesheim in 815 and may have been founded when the bishop moved from Elze to the Innerste ford, which was an important market on the Hellweg trade route. The settlement around the cathedral very quickly developed into a town and was awarded market rights by King Otto III in 983.[2] Originally the market was held in a street called Old Market (Alter Markt) which still exists today. The first market place was laid out around the church St. Andreas. When the city grew further, a bigger market place became necessary. The present market place of Hildesheim was laid out at the beginning of the 13th century when the city had about 5,000 inhabitants. When Hildesheim obtained city status in 1249, it was one of the biggest cities in Northern Germany.[3] For four centuries the clergy ruled Hildesheim, before a city hall was built and the citizens gained some influence and independence. Construction of the present City Hall started in 1268.[4] In 1367 Hildesheim became a member of the Hanseatic League. A war between the citizens and their bishop cost dearly in 1519-1523 when they engaged in a feud. Hildesheim became Lutheran in 1542, and only the cathedral and a few other buildings remained in imperial (Catholic) hands. Several villages around the city remained Catholic as well. In 1813, after the Napoleonic Wars, the town became part of the Kingdom of Hanover, which was annexed by the Kingdom of Prussia as a province after the Austro-Prussian War in 1866. In 1868 a highly valuable trove of about 70 Roman silver vessels for eating and drinking, the so-called Hildesheim Treasure, was unearthed by Prussian soldiers.

The city was heavily damaged by air raids in 1945, especially on 22 March. Although it had little military significance, two months before the end of the war in Europe the historic city was bombed as part of the Area Bombing Directive in order to undermine the morale of the German people. 28.5% of the houses were completely destroyed and 44.7% damaged. 26.8% of the houses remained undamaged. The centre, which had retained its medieval character until then, was almost levelled. As in many cities, priority was given to rapid building of badly needed housing, and concrete structures took the place of the destroyed buildings. Fortunately, most of the major churches, two of them now UNESCO World Heritage Sites, were rebuilt in the original style soon after the war. During the war, valuable world heritage materials had been hidden in the basement of the city wall. In 1978, the University of Hildesheim was founded. In the 1980s a reconstruction of the historic centre began. Some of the unattractive concrete buildings around the market place were torn down and replaced by replicas of the original buildings. In the fall of 2007, a decision was made to reconstruct the Umgestülpter Zuckerhut ("Upended Sugarloaf"), an iconic half-timbered house famous for its unusual shape. In 2015 the town celebrates 1200 years from 815 to 2015 with the Day of Lower Saxony. Spheric Panorama of the Market Place 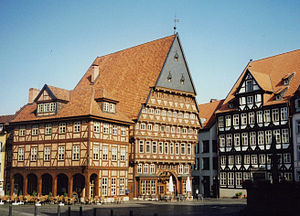 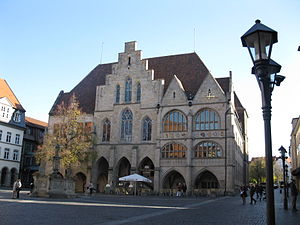 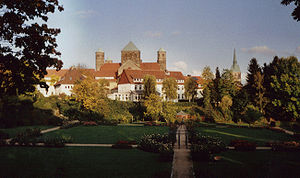 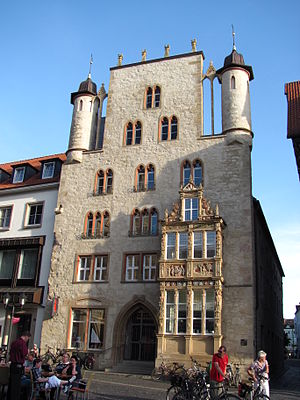 Tempelhaus in the Historic Market Place 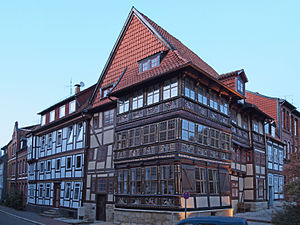 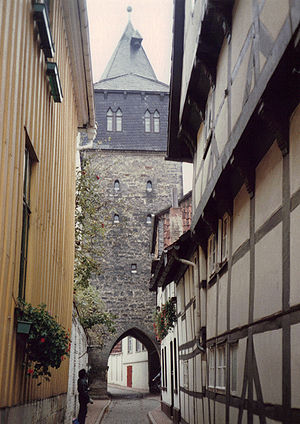 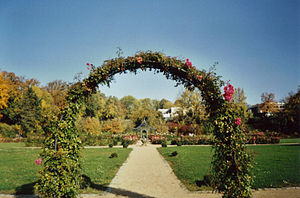 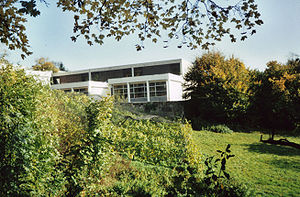 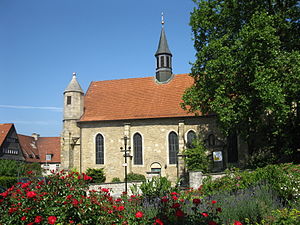 Other places of interest include the Theatre, offering opera, operetta and musicals, drama, ballet and concerts.

The following list shows the largest foreign groups in the city of Hildesheim as of 2013:[8]

Hildesheim is twinned with:

Hildesheim is home to notable multinational corporations – besides many strong medium-sized companies – including Blaupunkt, Bosch, Krupp, Thyssen, Fairchild and Coca-Cola.

Hildesheim has an efficient traffic infrastructure: it is a regional hub for interstate roads and railway (Hildesheim Hauptbahnhof is served by InterCityExpress services), is connected to the motorway (Autobahn), has a harbour at the artificial waterway Mittellandkanal and an airport.

The community has the headquarters of the Serbian Orthodox Diocese of Central Europe.[11]