Hīnayāna is a Sanskrit term literally meaning: the "Smaller Vehicle",[1] applied to the Śrāvakayāna, the Buddhist path followed by a śrāvaka who wishes to become an arhat. The term appeared around the first or second century. Hīnayāna is often contrasted with Mahāyāna, which means the "Great Vehicle."

There are a variety of interpretations as to who or what the term Hīnayāna refers. Kalu Rinpoche stated the "lesser" or "greater" designation "does not refer to economic or social status, but concerns the spiritual capacities of the practitioner".[1]

The Small Vehicle is based on becoming aware of the fact that all we experience in samsara is marked by suffering. Being aware of this engenders the will to rid ourselves of this suffering, to liberate ourselves on an individual level, and to attain happiness. We are moved by our own interest.

Renunciation and perseverance allow us to attain our goal."[2]

The Chinese monk Yijing, who visited India in the 7th century, distinguished Mahāyāna from Hīnayāna as follows:[3]

Both adopt one and the same Vinaya, and they have in common the prohibitions of the five offenses, and also the practice of the Four Noble Truths. Those who venerate the bodhisattvas and read the Mahāyāna sūtras are called the Mahāyānists, while those who do not perform these are called the Hīnayānists. 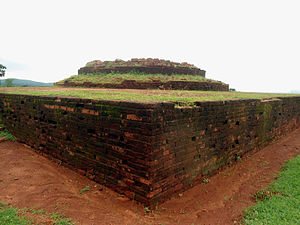 The Great Stupa at Thotlakonda Monastic Complex in Visakhapatnam, Andhra Pradesh, India, which initially flourished as an Hinayana vihara and later developed as a Theravada complex whose peak activity was during the second century BCE

The term was widely used in the past by Western scholars to cover "the earliest system of Buddhist doctrine", as the Monier-Williams Sanskrit-English Dictionary put it.[4] It has been used as a synonym for the Theravada tradition, which continues as the main form of Buddhism in Sri Lanka and Southeast Asia, but some scholars deny that the term included Theravada Buddhism. In 1950 the World Fellowship of Buddhists declared that the term Hīnayana should not be used when referring to any form of Buddhism existing today.

The word Hīnayāna is formed of hīna:[5] "little," "poor," "inferior," "abandoned," "deficient," "defective;" and yāna (यान):[6] "vehicle", where "vehicle" means "a way of going to enlightenment". The Pali Text Society's Pali-English Dictionary (1921–25) defines hīna in even stronger terms, with a semantic field that includes "poor, miserable; vile, base, abject, contemptible," and "despicable."

The term was translated by Kumārajīva and others into Classical Chinese as "small vehicle" (小 meaning "small", 乘 meaning "vehicle"), although earlier and more accurate translations of the term also exist. In Mongolian (Baga Holgon) the term for Hinayana also means "small" or "lesser" vehicle,[7] while in Tibetan there are at least two words to designate the term, theg chung meaning "small vehicle"[8] and theg dman meaning "inferior vehicle" or "inferior spiritual approach".[9]

Thrangu Rinpoche has emphasized that "hinayana" is in no way implying "inferior". In his translation and commentary of Asanga's Distinguishing Dharma from Dharmata, he writes, "all three traditions of hinayana, mahayana, and vajrayana were practiced in Tibet and that the hinayana which literally means "lesser vehicle" is in no way inferior to the mahayana."[10]

According to Jan Nattier, it is most likely that the term Hīnayāna postdates the term Mahāyāna and was only added at a later date due to antagonism and conflict between the bodhisattva and śrāvaka ideals. The sequence of terms then began with the term Bodhisattvayāna "bodhisattva-vehicle", which was given the epithet Mahāyāna "Great Vehicle". It was only later, after attitudes toward the bodhisattva teachings had become more critical, that the term Hīnayāna was created as a back-formation, contrasting with the already established term Mahāyāna.[11] The earliest Mahāyāna texts often use the term Mahāyāna as an epithet and synonym for Bodhisattvayāna, but the term Hīnayāna is comparatively rare in early texts, and is usually not found at all in the earliest translations. Therefore, the often-perceived symmetry between Mahāyāna and Hīnayāna can be deceptive, as the terms were not actually coined in relation to one another in the same era.[12]

According to Paul Williams, "the deep-rooted misconception concerning an unfailing, ubiquitous fierce criticism of the Lesser Vehicle by the [Mahāyāna] is not supported by our texts."[13] Williams states that while evidence of conflict is present in some cases, there is also substantial evidence demonstrating peaceful coexistence between the two traditions.[13]

Although the 18–20 early Buddhist schools are sometimes loosely classified as Hīnayāna in modern times, this is not necessarily accurate. There is no evidence that Mahāyāna ever referred to a separate formal school of Buddhism but rather as a certain set of ideals, and later doctrines.[14] Paul Williams has also noted that the Mahāyāna never had nor ever attempted to have a separate vinaya or ordination lineage from the early Buddhist schools, and therefore bhikṣus and bhikṣuṇīs adhering to the Mahāyāna formally adheres to the vinaya of an early school. This continues today with the Dharmaguptaka ordination lineage in East Asia and the Mūlasarvāstivāda ordination lineage in Tibetan Buddhism. Mahāyāna was never a separate sect of the early schools.[15] From Chinese monks visiting India, we now know that both Mahāyāna and non-Mahāyāna monks in India often lived in the same monasteries side by side.[16]

The Chinese Buddhist monk and pilgrim Yijing wrote about the relationship between the various "vehicles" and the early Buddhist schools in India. He wrote, "There exist in the West numerous subdivisions of the schools which have different origins, but there are only four principal schools of continuous tradition." These schools are the Mahāsāṃghika Nikāya, Sthavira nikāya, Mūlasarvāstivāda Nikāya, and Saṃmitīya Nikāya.[17] Explaining their doctrinal affiliations, he then writes, "Which of the four schools should be grouped with the Mahāyāna or with the Hīnayāna is not determined." That is to say, there was no simple correspondence between a Buddhist school and whether its members learn "Hīnayāna" or "Mahāyāna" teachings.[18]

To identify entire schools as "Hīnayāna" that contained not only śrāvakas and pratyekabuddhas but also Mahāyāna bodhisattvas would be attacking the schools of their fellow Mahāyānists as well as their own. Instead, what is demonstrated in the definition of Hīnayāna given by Yijing is that the term referred to individuals based on doctrinal differences.[3]

Scholar Isabelle Onians asserts that although "the Mahāyāna ... very occasionally referred to earlier Buddhism as the Hinayāna, the Inferior Way, [...] the preponderance of this name in the secondary literature is far out of proportion to occurrences in the Indian texts." She notes that the term Śrāvakayāna was "the more politically correct and much more usual" term used by Mahāyānists.[19] Jonathan Silk has argued that the term "Hinayana" was used to refer to whomever one wanted to criticize on any given occasion, and did not refer to any definite grouping of Buddhists.[20]

In the 7th century, the Chinese Buddhist monk Xuanzang describes the concurrent existence of the Mahāvihara and the Abhayagiri vihāra in Sri Lanka. He refers to the monks of the Mahāvihara as the "Hīnayāna Sthaviras" and the monks of Abhayagiri vihāra as the "Mahāyāna Sthaviras".[21] Xuanzang further writes, "The Mahāvihāravāsins reject the Mahāyāna and practice the Hīnayāna, while the Abhayagirivihāravāsins study both Hīnayāna and Mahāyāna teachings and propagate the Tripiṭaka."[22]

Mahayanists were primarily in philosophical dialectic with the Vaibhāṣika school of Sarvāstivāda, which had by far the most "comprehensive edifice of doctrinal systematics" of the nikāya schools.[23] With this in mind it is sometimes argued that the Theravada would not have been considered a "Hinayana" school by Mahayanists because, unlike the now-extinct Sarvastivada school, the primary object of Mahayana criticism, the Theravada school does not claim the existence of independent dharmas; in this it maintains the attitude of early Buddhism. Additionally, the concept of the bodhisattva as one who puts off enlightenment rather than reaching awakening as soon as possible, has no roots in Theravada textual or cultural contexts, current or historical. Aside from the Theravada schools being geographically distant from the Mahayana, the Hinayana distinction is used in reference to certain views and practices that had become found within the Mahayana tradition itself. Theravada, as well as Mahayana schools stress the urgency of one's own awakening in order to end suffering.[24][25][26] Some contemporary Theravadin figures have thus indicated a sympathetic stance toward the Mahayana philosophy found in the Heart Sutra and the Mūlamadhyamakakārikā.[27][28]

The Mahayanists were bothered by the substantialist thought of the Sarvāstivādins and Sautrāntikins, and in emphasizing the doctrine of śūnyatā, David Kalupahana holds that they endeavored to preserve the early teaching.[29] The Theravadins too refuted the Sarvāstivādins and Sautrāntikins (and followers of other schools) on the grounds that their theories were in conflict with the non-substantialism of the canon. The Theravada arguments are preserved in the Kathavatthu.[30]

Most western scholars regard the Theravada school to be one of the Hinayana schools referred to in Mahayana literature, or regard Hinayana as a synonym for Theravada.[31][32][33][34][35] These scholars understand the term to refer to schools of Buddhism that did not accept the teachings of the Mahāyāna sūtras as authentic teachings of the Buddha.[32][34] At the same time, scholars have objected to the pejorative connotation of the term Hinayana and some scholars do not use it for any school.[36]