From Infogalactic: the planetary knowledge core
Jump to: navigation, search
File:SriYantra construct.svg
The Sri Chakra, frequently called the Sri Yantra, represents the goddess in her form of Shri Lalitha or Tripura Sundari

Over the millennia of its development Hinduism has adopted several iconic symbols, forming part of Hindu iconography, that are imbued with spiritual meaning based on either the scriptures or cultural traditions. The exact significance accorded to any of the icons varies with region, period and denomination of the followers. Over time some of the symbols, for instance the Swastika has come to have wider association while others like Aum are recognized as unique representations of Hinduism. Other aspects of Hindu iconography are covered by the terms murti, for icons and mudra for gestures and positions of the hands and body.

Hindu sacraments are physical objects or markings that are considered sacred and used as a sign of devotion by the followers of Sanathana dharma (Hinduism). These are often objects associated with a puja (prayer) or religious ceremony.

The tilaka (or tilak) is a mark worn on the forehead or other parts of the body as a sign of spiritual devotion. Hindus may wear a tilaka regularly or especially on religious occasions. The shape of the tilaka is often an indicator of devotion to a certain deity. For example, a 'U' shape tilaka usually denotes devotion to Vishnu, while Shiva devotees often wear it in the form of three horizontal lines. It may be made of saffron, vermilion, turmeric, clay or simply ash.

To denote marriage and auspiciousness, married Hindu women commonly wear a decorative vermilion dot or bindu, or bindī on the forehead. This is analogous to a wedding ring worn in western countries. In southern India, the mark is called pottu (or bottu). The exact shape, size and location of the bindi or pottu shows regional variation; for instance, in northern India the bindi is often worn just below the hairline, while in southern India it is more common to wear it between the eyebrows. In east India, especially in West Bengal, traditionally larger bindis are worn as mark of devotion towards Goddess Durga.

Vibhuti is the holy ash obtained from sacred puja rites involving fire. Also a variant called Basma used as Vibhuti is prepared from the purified ashes of cow dung. Ash as the product of fire is considered intrinsically pure[citation needed]. It is used on the forehead, normally as three horizontal lines representing Shiva. Some Hindus meld both the three horizontal vibhuti lines of Shiva and the 'U' shape thilaka of Vishnu in an amalgam marker signifying Hari-Hara (Vishnu-Shiva). In addition, sacred ash signifies that the body's origin is from dust and ash and to dust and ash it shall return. The ash is a marker of impermanence. Everything in the interim is but an illusion (maya).

Vibhuti, when applied to the forehead, also symbolizes the willingness to destroy negative thoughts and qualities (jealousy, envy, anger, greed, etc.), as these negative qualities, if not destroyed, will bring all kinds of pains in life.

Rudraksha are seeds of the rudraksha tree that, in Hinduism, represent the tears of Lord Shiva (also known as, Rudra). They are often threaded into a necklace and used as a rosary to accompany prayer and meditation.

Among the most revered symbols in Hinduism, three are a quintessential part of its culture, and are most representative of its general ethos:

Om (or Aum, ॐ) is the sacred sound symbol that represents Universe; the ultimate reality (Brahman). It is prefixed and sometimes suffixed to all Vedic mantras and prayers. Aum is often said to represent God in the three aspects of Brahma (A), Vishnu (U) and Shiva (M). As the Divine primordial vibration, it represents the one ultimate reality, underlying and encompassing all of nature and all of existence. The written syllable ॐ called omkara serves as a deeply significant and distinctly recognizable symbol for Hindu dharma. The pronunciation of Aum moves through all possible human linguistic vowel sounds and is different from the pronunciation of Om. Both are often symbolically equated, although they are sonically distinct. 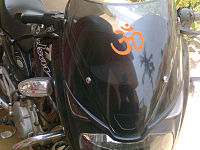 Many Hindus use Religious symbols on their vehicles, this image shows the Om on a Bajaj Pulsar Bike.

Swastika is a symbol connoting general auspiciousness. It may represent purity of soul, truth, and stability or, alternatively, Surya, the sun.[1] Its rotation in four directions has been used to represent many ideas, but primarily describes the four directions, the four Vedas and their harmonious whole. Its use in Hinduism dates back to ancient times.

Sri Chakra Yantra of Tripura Sundari (commonly referred to as Sri Yantra) is a mandala formed by nine interlocking triangles. Four of these triangles are oriented upright, representing Shiva or the Masculine. Five of these triangles are inverted triangles representing Shakti, or the Feminine. Together, the nine triangles form a web symbolic of the entire cosmos, a womb symbolic of creation, and together express Advaita Vedanta or non-duality. All other yantras are derivatives of this supreme yantra. 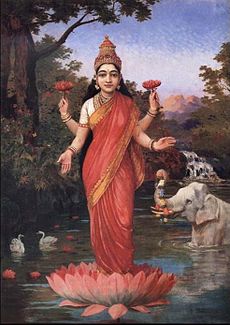 Goddess Lakshmi holding and standing on a lotus.

Several symbols (animals, flora, instruments, weapons, or even color) in Hindu iconography are associated with particular devas, and vice versa. In certain cases the deities themselves are personifications of natural forces, for instance Agni (fire), Vayu (wind), Surya (Sun) and Prithvi (Earth). In other instances, the associations arise from specific incidents or characteristics related in Hindu theology. The iconography serve to identify the particular deity in their pictorial or sculptural representations. The symbolism also often links the deities with a particular natural or human attribute, or profession.

It is important to understand the symbolism, in order to appreciate the allegorical references in not only Hindu scriptures (for instance, Puranic tales), but also in both ancient and modern secular works of authors from the Indian subcontinent. 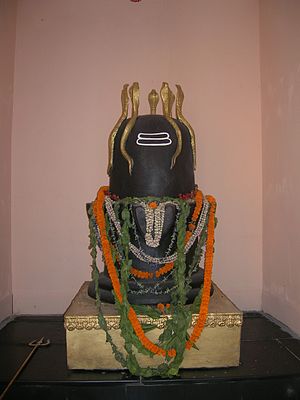 The Shiva Lingam represents the divine being Shiva, and is used as a symbol of the power of fertility and strength[citation needed].

The Lotus is associated with the creation theology as well as the gods Vishnu, Brahma, and Lakshmi.

The musical instrument Veena is associated with the Hindu goddess Saraswati and the sage Narada. It represents arts and learning. 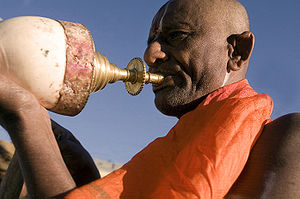 The conch shell is a major Hindu article of prayer, used as a trumpeting announcement of all sorts. The God of Preservation, Vishnu, is said to hold a special conch, Panchajanya, that represents life as it has come out of life-giving waters. In the story of Dhruva the divine conch plays a special part. The warriors of ancient India would blow conch shells to announce battle, such as is famously represented in the beginning of the war of Kurukshetra in the Mahabharata, a famous Hindu epic. The conch shell is also a deep part of Hindu symbolic and religious tradition. Today most Hindus use the conch as a part of their religious practices, blowing it during worship at specific points, accompanied by ceremonial bells. Shankha also symbolizes the sound that created the universe and stands for knowledge.

The Chakra or disc-like weapon of Vishnu is often found mounted on the top of Vaishnava temples or incorporated into architectural designs. Images depicting Vishnu's four-armed Narayana form almost always include the Chakra in one of his hands. It is a general symbol for protection. Chakra is also known to symbolize the need to follow dharma and to condemn adharma. 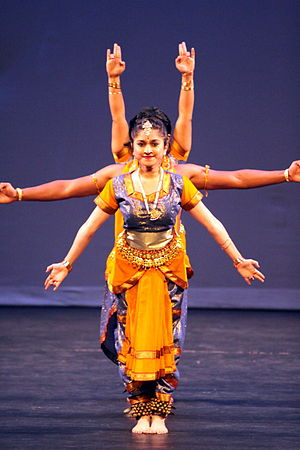 In Indian dance, the idea of multiple arms is often shown by several dancers standing behind each other with their arms in different positions.

An array of Hindu, Buddhist, and some Jain deities are often depicted with multiple heads, arms, and other body parts, creating what one author refers to as a "multiplicity convention" in religious iconography.[2] Such multiple body parts represent the divine omnipresence and immanence (ability to be in many places at once and simultaneously exist in all places at once), and thereby the ability to influence many things at once.[2] The specific meanings attributed to the multiple body parts of an image are symbolic, not literal in context.[3] In such depictions, the visual effect of an array of multiple arms is to create a kinetic energy showing that ability.[4]

Vāhana or vehicle, sometimes called a mount, is an animal or mythical entity closely associated with a particular deity in Hindu theology. Sometimes the deity is iconographically depicted riding and/or mounted on the vahana; other times, the vahana is depicted at the deity's side or symbolically represented as a divine attribute.