There are two historic classifications of Hindu texts: Shruti – that which is heard,[5] and Smriti – that which is remembered.[6] The Śruti refers to the body of most authoritative, ancient religious texts, without any author, comprising the central canon of Hinduism.[5] It includes the four Vedas including its four types of embedded texts - the Samhitas, the Brahmanas, the Aranyakas and the early Upanishads.[7] Of the Shrutis (Vedic corpus), the Upanishads alone are widely influential among Hindus, considered scriptures par excellence of Hinduism, and their central ideas have continued to influence its thoughts and traditions.[8][9]

The Smriti texts are a specific body of Hindu texts attributed to an author,[7] are is a derivative work and is considered less authoritative than Sruti in Hinduism.[6] The Smrti literature is a vast corpus of diverse texts, and includes but is not limited to Vedāngas, the Hindu epics, the Sutras and Shastras, the texts of Hindu philosophies, the Puranas, the Kāvya or poetical literature, the Bhasyas, and numerous Nibandhas (digests) covering politics, ethics, culture, arts and society.[10][11]

Many ancient and medieval Hindu texts were composed in Sanskrit, many others in regional Indian languages. In modern times, most ancient texts have been translated into other Indian languages and some in Western languages.[2] Prior to the start of the common era, the Hindu texts were composed orally, then memorized and transmitted orally, from one generation to next, for more than a millennia before they were written down into manuscripts.[12][13] This verbal tradition of preserving and transmitting Hindu texts, from one generation to next, continued into the modern era.[12][13] 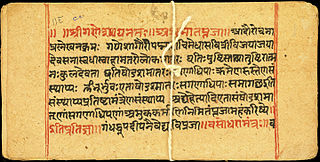 Manuscripts of 18th-century Hindu texts in Sanskrit and in a regional language (below).

The Vedas are a large body of Hindu texts originating in ancient India, before about 300 BC. Composed in Vedic Sanskrit, the texts constitute the oldest layer of Sanskrit literature and the oldest scriptures of Hinduism.[14][15][16] Hindus consider the Vedas to be apauruṣeya, which means "not of a man, superhuman"[17] and "impersonal, authorless".[18][19][20]

Vedas are also called śruti ("what is heard") literature,[21] distinguishing them from other religious texts, which are called smṛti ("what is remembered"). The Veda, for orthodox Indian theologians, are considered revelations, some way or other the work of the Deity.[22] In the Hindu Epic the Mahabharata, the creation of Vedas is credited to Brahma.[23]

There are four Vedas: the Rigveda, the Yajurveda, the Samaveda and the Atharvaveda.[24][25] Each Veda has been subclassified into four major text types – the Samhitas (mantras and benedictions), the Aranyakas (text on rituals, ceremonies, sacrifices and symbolic-sacrifices), the Brahmanas (commentaries on rituals, ceremonies and sacrifices), and the Upanishads (text discussing meditation, philosophy and spiritual knowledge).[24][26][27]

The Upanishads are a collection of Hindu texts which contain some of the central philosophical concepts of Hinduism.[28][note 1]

The Upanishads are commonly referred to as Vedānta, variously interpreted to mean either the "last chapters, parts of the Veda" or "the object, the highest purpose of the Veda".[29] The concepts of Brahman (Ultimate Reality) and Ātman (Soul, Self) are central ideas in all the Upanishads,[30][31] and "Know your Ātman" their thematic focus.[31] The Upanishads are the foundation of Hindu philosophical thought and its diverse traditions.[9][32] Of the Vedic corpus, they alone are widely known, and the central ideas of the Upanishads have had a lasting influence on Hindu philosophy.[8][9]

More than 200 Upanishads are known, of which the first dozen or so are the oldest and most important and are referred to as the principal or main (mukhya) Upanishads.[33][34] The mukhya Upanishads are found mostly in the concluding part of the Brahmanas and Aranyakas[35] and were, for centuries, memorized by each generation and passed down verbally. The early Upanishads all predate the Common Era, some in all likelihood pre-Buddhist (6th century BC),[36] down to the Maurya period.[37] Of the remainder, some 95 Upanishads are part of the Muktika canon, composed from about the start of common era through medieval Hinduism. New Upanishads, beyond the 108 in the Muktika canon, continued to being composed through the early modern and modern era, though often dealing with subjects unconnected to Hinduism.[38][39] 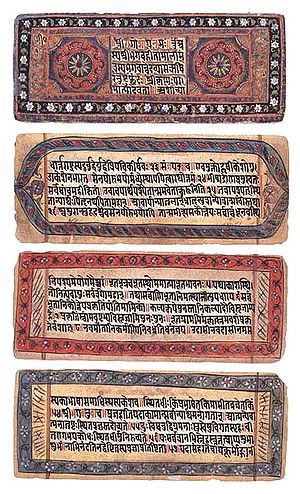 A 19th century manuscript of the Hindu text Bhagavad Gita.

The Sutras and Shastras texts were compilations of technical or specialized knowledge in a defined area. The earliest are dated to later half of the 1st millennium BC. The Dharma-shastras (law books), derivatives of the Dharma-sutras. Other examples were bhautikashastra "physics", rasayanashastra "chemistry", jīvashastra "biology", vastushastra "architectural science", shilpashastra "science of sculpture", arthashastra "economics" and nītishastra "political science".[40] It also includes Tantra and Agama literature.[41]

This genre of texts includes the Sutras and Shastras of the six schools of Hindu philosophy.[42][43]

The Bhagavad Gita is a 700–verse Hindu scripture that is part of the ancient Sanskrit epic Mahabharata. This scripture contains a conversation between Pandava prince Arjuna and his guide Krishna on a variety of philosophical issues. Commentators see the setting of the Gita in a battlefield as an allegory for the ethical and moral struggles of the human life. The Bhagavad Gita's call for selfless action inspired many leaders of the Indian independence movement including Mohandas Karamchand Gandhi, who referred to the Gita as his "spiritual dictionary". Numerous commentaries have been written on the Bhagavad Gita with widely differing views on the essentials, beginning with Adi Sankara's commentary on the Gita in the 8th century AD.

The Puranas are a vast genre of Hindu texts that encyclopedically cover a wide range of topics, particularly myths, legends and other traditional lore.[44] Composed primarily in Sanskrit, but also in regional languages,[45][46] several of these texts are named after major Hindu deities such as Vishnu, Shiva and Devi.[47][48]

There are 18 Maha Puranas (Great Puranas) and 18 Upa Puranas (Minor Puranas),[49] with over 400,000 verses.[44] The Puranas do not enjoy the authority of a scripture in Hinduism,[49] but are considered a Smriti.[50] These Hindu texts have been influential in the Hindu culture, inspiring major national and regional annual festivals of Hinduism.[51] The Bhagavata Purana has been among the most celebrated and popular text in the Puranic genre.[52][53]

The Tevaram is a body of remarkable hymns exuding Bhakti composed more than 1400–1200 years ago in the classical Tamil language by three Saivite composers. They are credited with igniting the Bhakti movement in the whole of India.

The Nalayira Divya Prabandha (or Nalayira (4000) Divya Prabhamdham) is a divine collection of 4,000 verses (Naalayira in Tamil means 'four thousand') composed before 8th century AD [1], by the 12 Alvars, and was compiled in its present form by Nathamuni during the 9th – 10th centuries. The Alvars sung these songs at various sacred shrines. These shrines are known as the Divya Desams.[citation needed]

In South India, especially in Tamil Nadu, the Divya Prabhandha is considered as equal to the Vedas, hence the epithet Dravida Veda. In many temples, Srirangam, for example, the chanting of the Divya Prabhandham forms a major part of the daily service. Prominent among the 4,000 verses are the 1,100+ verses known as the Thiru Vaaymozhi, composed by Nammalvar (Kaaril Maaran Sadagopan) of Thiruk Kurugoor.[citation needed]

Ancient and medieval era Hindu texts for specific fields, in Sanskrit and other regional languages, have been reviewed as follows,