Hinrich Lohse (2 September 1896 – 25 February 1964) was a Nazi German politician, best known for his rule of the Baltic states during World War II.

Hinrich Lohse was born in the town of Mühlenbarbek in Province of Schleswig-Holstein. He was born into a small farming family. From 1903 to 1912 he attended the Volksschule in his hometown, and afterwards the higher trade school. In 1913 he worked as an employee at the Blohm & Voss Shipyard in Hamburg. During the First World War, he served in the Imperial German Army from 23 September 1915 until his discharge for war wounds on 30 October 1916.

From 1919, Lohse was first an associate at the Schleswig-Holstein Farmers' Association, and then as of 1920 General Secretary of the Schleswig-Holsteinische Bauern- und Landarbeiterdemokratie. In 1923 he joined the Nazi Party and became on 27 March 1925 the NSDAP Gauleiter for Schleswig-Holstein. In 1924, as a member of the Völkisch-Sozialer Block list, he became the only Nazi to be elected to the city representative college (Stadtverordnetenkollegium) of Altona/Elbe. During this time, he led various nationally-oriented farming associations in northern Germany, such as the Landvolkbewegung ("Rural People's Movement"), into the Nazi Party. Between 1928 and 1929, Lohse also temporarily administered the Nazi Gau of Hamburg.

Lohse, who had been a member of the Reichstag since 1932, was appointed shortly after the Nazis' seizure of power as Oberpräsident (High President) of the Province of Schleswig-Holstein. In 1934, he took over the chairmanship of the Nordic Association (Nordische Gesellschaft). In 1942, Lohse was appointed Reich Defence Commissar, as were all Gauleiters.

Occupation official in the Baltic states

On 17 July 1941, after the German occupation of Baltic states from the Soviet Union, Lohse was appointed "Reichskommissar for the Ostland". Lohse retained his functions in Schleswig-Holstein and shuttled between his two seats of Riga and Kiel. As Reichskommissar for Ostland and Alfred Rosenberg's deputy, he was responsible for the implementation of Nazi Germanization policies built on the foundations of the Generalplan Ost: the killing of almost all Jews, Romani people and Communists and the oppression of the local population were its necessary corollaries.[1] Lohse was not directly responsible for the murderous actions of police forces and Einsatzgruppen who were under the control of SS-Brigadeführer and Generalmajor der Polizei Franz Walter Stahlecker, later on Higher SS and Police Leader (German: Höhere SS- und Polizeiführer, HSSPF) and even more of SS General and HSSPF Friedrich Jeckeln, the chief organizer of the Rumbula massacre.[2]

Neverteless as the leader of the "civil" administration he implemented, through a series of special edicts and guiding principles for the general settlement plan for Ostland, many of the preparatory acts that facilitated the subsequent police Aktionen (Nazi euphemism for killing operations). In particular he shared with Hans-Adolf Prützmann many of the responsibilities for the enslavement and ghettoization of the Jews of Latvia.

When he fled the Reichskommissariat Ostland in the autumn of 1944, and reached Schleswig-Holstein, he exercised there absolute rule as Reich Defence Commissar until the end of the war. 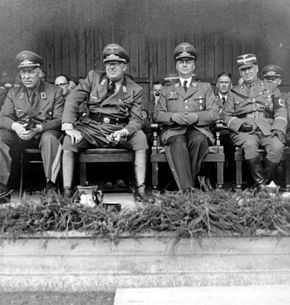 On 6 May 1945, Lohse was unseated as High President of Schleswig-Holstein and shortly thereafter imprisoned by the British Army. Lohse was sentenced in 1948 to 10 years in prison, but was released in 1951 due to illness. Two inquiries were launched by German prosecutors against him; the grant of a High-Presidential pension which Lohse was fighting for was withdrawn under pressure from the Schleswig-Holstein Landtag. Lohse spent his twilight years in Mühlenbarbek where he died.[3]