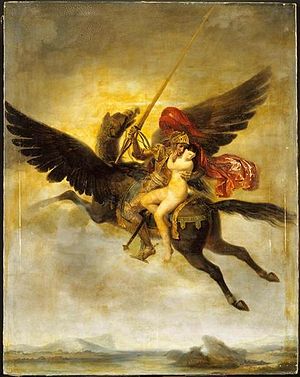 Roger délivrant Angélique (1824) by Louis-Édouard Rioult depicts the scene of Orlando Furioso where Ruggiero rescues Angelique while riding on a hippogriff.

The hippogriff, or sometimes hippogryph is a legendary creature which has the front quarters of an eagle and the hindquarters of a horse.

The first recorded mention of the hippogriff was made by the Latin poet Virgil in his Eclogues. Though sometimes depicted during the Classical Era and during the rule of the Merovingians, it was used by Ludovico Ariosto in his Orlando Furioso, at the beginning of the 16th century. Within the poem, the hippogriff is a steed born of a mare and a griffin—it is extremely fast and is presented as being able to fly around the world and to the Moon. It is ridden by magicians and the wandering knight Ruggiero, who, from the creature’s back, frees the beautiful Angelica.

Sometimes depicted on heraldic coats of arms, the hippogriff became a subject of visual art in the 19th century, when it was often drawn by Gustave Doré.

The word Hippogriff, also spelled Hippogryph and Hippogryphe[1] is derived from the Ancient Greek ἵππος /híppo, meaning “horse,” and the Italian grifo meaning “griffin” (from Latin gryp or gryphus), which denotes another mythical creature, with the head of an eagle and body of a lion, that is purported to be the father of the hippogriff.[2][3] The word hippogriff was adopted into English shortly before 1615.[4]

The hippogriff is a symbol of the Greek god Apollo, either through his connection to the Muses or as god of the sun.[5] Buonarotti is stated to have believed that the worship of Apollo and with him the symbol of the hippogriff, came to the Greeks from cultures to the east.[5]

Of the heraldic representations of the hippogriff, Arthur Charles Fox-Davies states that hybrid fantastical creatures' depections are "ugly, inartstic, and unnecessary. Their representation leaves one with a disappointed feeling of crudity of draughtsmanship. "[6] John Vinycomb states that the hippogriff is not used in the British heraldic tradition.[7] 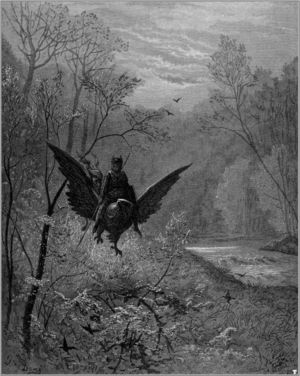 no fiction wrought magic lore,
But natural was the steed the wizard pressed;
For him a filly to griffin bore;
Hight hippogryph. In wings and beak and crest,
Formed like his sire, as in the feet before;
But like the mare, his dam, in all the rest.
Such on Riphaean hills, though rarely found,
Are bred, beyond the frozen ocean's bound.

Drawn by enchantment from his distant lair,
The wizard thought but how to tame the foal;
And, in a month, instructed him to bear
Saddle and bit, and gallop to the goal;
And execute on earth or in mid air,
All shifts of manege, course and caracole;
He with such labour wrought. This only real,
Where all the rest was hollow and ideal.

According to Thomas Bulfinch's Legends of Charlemagne:

According to Vidal, a Catalan historian, this creature was supposed to live near Céret, in the County of Roussillon of modern-day France, during the Middle Ages. Claw marks were found on a rock near Mas Carol.[9] The belief in the existence of the hippogriff, such as Ariosto describes, is fiercely attacked in a scientific essay on religion in 1862, which argues that such an animal can neither be a divine creation, nor truly exist. The hippogriff is supposed to be a mixture of several animals and the author notes that in order to support its weight, the wings would be so heavy that flight would be impossible, which proves—without question—that it does not exist.[10]

An animatronic Hippogriff in the nest on the left side of the lift hill of the roller coaster Flight of the Hippogriff in Orlando, Florida

Artist Max Klinger used the hippogriff amongst other objects in his drawing Fantasy and the Artist to note his disparagement for artistic work that relies on out-worn and cliched symbolism.[12]

In a hoax initially perpetrated in 1904 in Lake George, New York State, tricksters used a fake “monster” which became known as "The Hippogriff".[13] The creation had a head of a bird of prey, teeth, and two large horse ears, which could be controlled from below. The pranks and sightings faded until 1999 when several people staying at the Island Harbour House Hotel stated they had seen a sea monster at night. The old hoax was uncovered by the Daily News and the Lake George Historical Association Museum, which created a copy of the original wooden monster to display to the public in August 2002.[14]

The fantasy role-playing game Dungeons & Dragons includes a version of the creature, which is described as having a horse's "ears, neck, mane, torso, and hind legs" and an eagle's "wings, forelegs, and face". According to the game's rules, the creatures are closely related to griffins and pegasi.[17][non-primary source needed]

A hippogriff named Buckbeak features prominently in Harry Potter.[18] Peter Dendle says that the portrayal of the treatment of Buckbeak in the novels is one example that demonstrates "[t]he emotional need to express domination symbolically"[19] as well as being one of the episodes that allows Harry to be shown as the "perennial liberator of all manner of creatures."[19] Al Roker calls the creation of Buckbeak in the film Harry Potter and the Prisoner of Azkaban "one of the most magnificent and realistic creatures in film history."[18] The character was used to create the theme for a roller coaster called Flight of the Hippogriff at the Florida amusement park The Wizarding World of Harry Potter in which the cars are wicker covered and pass by a statue of a hippogriff in a nest.[20]