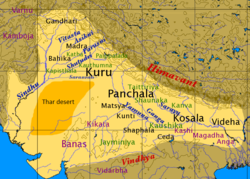 Map of North India in the late Vedic period. The location of shakhas is labeled in green; the Thar Desert is dark yellow.

The Vedic liturgy is conserved in the mantra portion of the four Vedas,[6] which are compiled in Sanskrit. The religious practices centered on a clergy administering rites.[7] The complex Vedic rituals of Śrauta continue in coastal Andhra.[8]

Scholars consider Vedic religion to have been a composite of the Indo-Aryan and Harappan cultures.[9]

The commonly proposed period of earlier Vedic age is dated back to 2nd millennium BC.[10] The Vedic religion was the religion of the Indo-Aryans,[11][note 3] and existed in northern India from c. 1750 to 500 BC.[13][note 4] The Indo-Aryans were a branch of the Indo-European language family, which originated in the Kurgan culture of the Central Asian steppes.[16][note 6][note 7]

The Vedic beliefs and practices of the pre-classical era were closely related to the hypothesised Proto-Indo-European religion,[34][35] and the Indo-Iranian religion.[36] According to Anthony, the Old Indic religion probably emerged among Indo-European immigrants in the contact zone between the Zeravshan River (present-day Uzbekistan) and (present-day) Iran.[37] It was "a syncretic mixture of old Central Asian and new Indo-European elements",[37] which borrowed "distinctive religious beliefs and practices"[38] from the Bactria–Margiana Culture.[38] At least 383 non-Indo-European words were borrowed from this culture, including the god Indra and the ritual drink Soma.[39] According to Anthony,

Many of the qualities of Indo-Iranian god of might/victory, Verethraghna, were transferred to the adopted god Indra, who became the central deity of the developing Old Indic culture. Indra was the subject of 250 hymns, a quarter of the Rig Veda. He was associated more than any other deity with Soma, a stimulant drug (perhaps derived from Ephedra) probably borrowed from the BMAC religion. His rise to prominence was a peculiar trait of the Old Indic speakers.[25]

The Vedic religion of the later Vedic period co-existed with local religions, such as the Yaksha cults,[5][44][web 1] and was itself the product of "a composite of the Indo-Aryan and Harappan cultures and civilizations".[45] David Gordon White cites three other mainstream scholars who "have emphatically demonstrated" that Vedic religion is partially derived from the Indus Valley Civilizations.[46] The religion of the Indo-Aryans was further developed when they migrated into the Ganges Plain after c. 1100 BC and became settled farmers,[17][47][48] further syncretising with the native cultures of northern India.[5]

Texts dating to the Vedic period, composed in Vedic Sanskrit, are mainly the four Vedic Samhitas, but the Brahmanas, Aranyakas and some of the older Upanishads (Bṛhadāraṇyaka, Chāndogya, Jaiminiya Upanishad Brahmana) are also placed in this period. The Vedas record the liturgy connected with the rituals and sacrifices performed by the 16 or 17 Śrauta priests and the purohitas. According to traditional views, the hymns of the Rigveda and other Vedic hymns were divinely revealed to the rishis, who were considered to be seers or "hearers" (Śruti means "what is heard") of the Veda, rather than "authors". In addition the Vedas are said to be "apauraṣaya", a Sanskrit word meaning "uncreated by man" and which further reveals their eternal non-changing status. 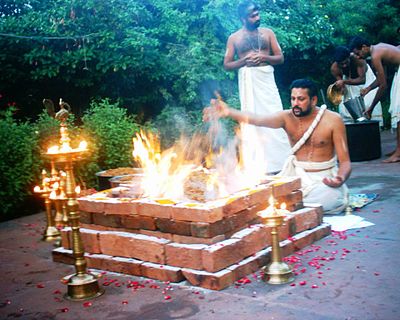 A Śrauta yajna being performed in South India.

The mode of worship was worship of the elements like fire and rivers, worship of heroic gods like Indra, chanting of hymns and performance of sacrifices. The priests performed the solemn rituals for the noblemen (Kshatriyas) and wealthy commoners Vaishyas. People prayed for abundance of children, rain, cattle (wealth), long life and an afterlife in the heavenly world of the ancestors. This mode of worship has been preserved even today in Hinduism, which involves recitations from the Vedas by a purohita (priest), for prosperity, wealth and general well-being. However, the primacy of Vedic deities has been seconded to the deities of Puranic literature.

Specific rituals and sacrifices of the Vedic religion include, among others:[49]

The Hindu rites of cremation are seen since the Rigvedic period; while they are attested from early times in the Cemetery H culture, there is a late Rigvedic reference invoking forefathers "both cremated (agnidagdhá-) and uncremated (ánagnidagdha-)".(RV 10.15.14)[52][53]

Though a large number of devatas are named in the Rig Veda, only 33 devas are counted, eleven each of earth, space and heaven.[54] The Vedic pantheon knows two classes, Devas and Asuras. The Devas (Mitra, Varuna, Aryaman, Bhaga, Amsa, etc.) are deities of cosmic and social order, from the universe and kingdoms down to the individual. The Rigveda is a collection of hymns to various deities, most notably heroic Indra, Agni the sacrificial fire and messenger of the gods, and Soma, the deified sacred drink of the Indo-Iranians.[55] Also prominent is Varuna (often paired with Mitra) and the group of "All-gods", the Vishvadevas.[56]

Vedic philosophy primarily begins with the later part of the Rigveda, which was compiled before 1100 BC.[57] Most of the philosophy of the Rigveda is contained in the sections Purusha sukta and Nasadiya sukta.[58]

Major philosophers of this era were Rishis Narayana, Kanva, Rishaba, Vamadeva, and Angiras.[59]

Ethics in the Vedas are based on the concepts of satya and ṛta. Satya is the principle of integration rooted in the Absolute,[60] whereas ṛta is the expression of satya, which regulates and coordinates the operation of the universe and everything within it.[61] Panikkar remarks:

Ṛta is the ultimate foundation of everything; it is "the supreme", although this is not to be understood in a static sense [...] It is the expression of the primordial dynamism that is inherent in everything...."[62]

The term is inherited from the Proto-Indo-Iranian religion, the religion of the Indo-Iranian peoples prior to the earliest Vedic (Indo-Aryan) and Zoroastrian (Iranian) scriptures. Asha[pronunciation?] (aša) is the Avestan language term (corresponding to Vedic Sanskrit ṛta) for a concept of cardinal importance[63] to Zoroastrian theology and doctrine.

Conformity with ṛta would enable progress whereas its violation would lead to punishment. The term Dharma was already used in Brahmanical thought, where it was conceived as an aspect of ṛta.[64]

The concept of yajñā "sacrifice" is also enunciated in the Purusha Sukta, where reaching the Absolute itself is considered a transcendent sacrifice when viewed from the point of view of the individual.[65]

...this was a time when traditional religious practices and beliefs were reassessed. The brahmins and the rituals they performed no longer enjoyed the same prestige they had in the Vedic period".[69]

According to Muesse, some of the fundamental concepts of Hinduism, namely karma, reincarnation and "personal enlightenment and transformation", did not exist in the Vedic religion, developed between 800 BC and 200 BC:[4][note 9]

Indian philosophers came to regard the human as an immortal soul encased in a perishable body and bound by action, or karma, to a cycle of endless existences.[71]

The Vedic religion gradually metamorphosed into the various schools of Hinduism, which further evolved into Puranic Hinduism.[72] However aspects of the historical Vedic religion survived in corners of the Indian subcontinent, such as Kerala where the Nambudiri Brahmins continue the ancient Śrauta rituals, which are considered extinct in all other parts.

...go back to a hoary antiquity. The Vedas, the Brahmanas, the Grhyasutras, the Dharmasutras, the Smritis and other treatises describe the rites, ceremonies and customs.[73]

The worshipping rituals developed in such a way that

A formal distinction was maintained between Śrauta rites (rites using the Vedic hymns), which were necessarily performed by priests, and Griha ("domestic") rites, performed by the Aryan householder himself; but both the latter and the former were subject to priestly influence. Some domestic rites became almost indistinguishable from the priestly Śrauta sacrifices; and, even where older ceremonies were retained, they were usually interwoven with elements of the priestly ritual.[74]

Vedic religion was followed by Upanishads which gradually evolved into Vedanta, which is regarded by some as the primary institution of Hinduism. Vedanta considers itself "the purpose or goal [end] of the Vedas."[75] The philosophy of Vedanta (lit. “The end of the Vedas"), transformed the Vedic worldview to monistic one. This led to the development of tantric metaphysics and gave rise to new forms of yoga, such as jnana yoga and bhakti yoga.[76] There are some conservative schools which continue portions of the historical Vedic religion largely unchanged. (see Śrauta, Nambudiri).[77]

Of the continuation of the Vedic tradition in a newer sense, Jeaneane D. Fowler writes the following:

The Vedic gods declined[79] but did not disappear, and local cults were assimilated into the Vedic-brahmanic pantheon, which changed into the Hindu pantheon.[80] Deities arose that were not mentioned or barely mentioned in the Veda, especially Shiva and Vishnu,[79] and gave rise to Shaivism and Vaishnavism.[79]

Interpretations of Vedic Mantras in Hinduism

The various Hindu schools and traditions give various interpretations of the Vedic hymns.

Mīmāṃsā philosophers argue that there was no need to postulate a maker for the world, just as there was no need for an author to compose the Vedas or a god to validate the rituals.[81] Mīmāṃsā argues that the gods named in the Vedas have no existence apart from the mantras that speak their names. To that regard, the power of the mantras is what is seen as the power of gods.[82]

Adi Shankara interpreted Vedas as being nondualistic or monistic.[83] However, Arya Samaj holds the view that the Vedic mantras tend to monotheism.[84] Even the earlier Mandalas of Rig Veda (books 1 and 9) contains hymns which are thought to have a tendency toward monotheism.[85] Often quoted isolated pada 1.164.46 of the Rig Veda states (trans. Griffith):

The non-Vedic śramaṇa traditions existed alongside Brahmanism.[86][87][note 10][note 11][note 12] These were not direct outgrowths of Vedism, but movements with mutual influences with Brahmanical traditions,[86] reflecting "the cosmology and anthropology of a much older, pre-Aryan upper class of northeastern India".[88] Jainism and Buddhism evolved out of the Shramana tradition.[89]

There are Jaina references to 22 prehistoric tirthankaras. In this view, Jainism peaked at the time of Mahavira (traditionally put in the 6th Century BC).[90][91] Buddhism, traditionally put from c. 500 BC, declined in India over the 5th to 12th centuries in favor of Puranic Hinduism[92] and Islam.[93][94]