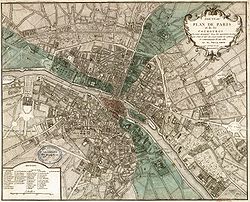 Historical geography seeks to determine how cultural features of various societies across the planet emerged and evolved, by understanding their interaction with their local environment and surroundings.

In its early days, historical geography was difficult to define as a subject. A textbook from the 1950s cites a previous definition as an 'unsound attempt by geographers to explain history'.[1] Its author, J. B. Mitchell, came down firmly on the side of geography: 'the historical geographer is a geographer first last and all the time' By 1975 the first number of the Journal of Historical Geography [2] had widened the discipline to a broader church: 'the writings of scholars of any disciplinary provenance who have something to say about matters of geographical interest relating to past time'.

For some in the United States of America, the term historical geography has a more specialized meaning: the name given by Carl Ortwin Sauer of the University of California, Berkeley to his program of reorganizing cultural geography (some say all geography) along regional lines, beginning in the first decades of the 20th century. To Sauer, a landscape and the cultures in it could only be understood if all of its influences through history were taken into account: physical, cultural, economic, political, environmental. Sauer stressed regional specialization as the only means of gaining sufficient expertise on regions of the world. Sauer's philosophy was the principal shaper of American geographic thought in the mid-20th century. Regional specialists remain in academic geography departments to this day. But some geographers feel that it harmed the discipline; that too much effort was spent on data collection and classification, and too little on analysis and explanation. Studies became more and more area-specific as later geographers struggled to find places to make names for themselves. These factors may have led in turn to the 1950s crisis in geography, which raised serious questions about geography as an academic discipline in the USA.

This sub-branch of human geography is closely related to history, environmental history, and historical ecology.[3] At many colleges it is a field of study in Historical studies.