From Infogalactic: the planetary knowledge core
(Redirected from History of Italy during Roman times)
Jump to: navigation, search
File:Shepherd-c-026-027.jpg
Italia (northern section) under Augustus and successors 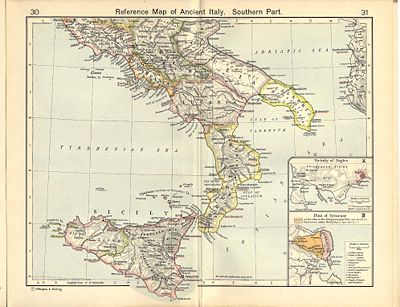 Roman Italy was created officially by the Roman Emperor Augustus with the Latin name Italia. It was the first time in history that the Italian peninsula (from the Alps to the Ionian Sea) was united under the same name. In the year 292, the three islands of Corsica, Sardinia and Sicily were added to Roman Italy by Emperor Diocletianus.

Italy (Italia in Latin and Italian) was the name of the administrative division of the Italian peninsula during the Roman era. It was not a province, but became the territory of the city of Rome, thus having a special status.[1] Following the end of the Social War (91–88 BC), Rome had allowed its Italian allies (socii) full rights in Roman society and granted the Roman citizenship to all the Italic peoples.[2]

After having been for centuries the heart of the Empire, from the 3rd century the government and the cultural center began to move eastward: first the Edict of Caracalla in 212 AD extended Roman citizenship to all free men within the imperial boundaries, then Christianity became the dominant religion during Constantine's reign (306–337) raising the power of other Eastern political centres, and finally the capital was moved to Constantinople in 330 AD.

As a result, Italy began to decline in favour of the provinces, which resulted in the division of the Empire into two administrative units in 395 AD: the Western Empire, with capital Mediolanum (Milan), and the Eastern Empire, with capital Byzantium (Constantinople). In 402 AD the capital of Roman Italy was moved to Ravenna from Milan, confirming the decadence of the city of Rome (that was sacked in 410 AD for the first time in seven centuries).

The name Italia covered an area whose borders evolved over time. According to Strabo's Geographica, before the expansion of the Roman Republic, the name was used by Greeks to indicate the land between the strait of Messina and the line connecting the gulf of Salerno and gulf of Taranto (corresponding roughly to the current region of Calabria); later the term was extended by Romans to include the Italian peninsula up to the Rubicon, a river located between Northern and Central Italy.

In 49 BC, with the Lex Roscia Julius Caesar gave Roman citizenship to the people of the Cisalpine Gaul,[3] while in 42 BC the hitherto existing province was abolished, thus extending Italy to the north up to the southern foot of the Alps.[4][5]

Under Augustus, the peoples of today's Aosta Valley and of the western and northern Alps were subjugated (so the western border of Roman Italy was moved to the Varus river), and the Italian eastern border was brought to the Arsia river in Istria;.[5] Finally, in the late 3rd century AD Italy came to include the islands of Corsica et Sardinia and Sicily, as well as Raetia and part of Pannonia to the north.[6]

At the beginning of the imperial era, Italy was a collection of territories with different political statuses. Some cities, called municipii, had some independence from Rome, while others, the coloniae, were founded by the Romans themselves. Around 7 BC, Augustus divided Italy into eleven regiones, as reported by Pliny the Elder in his Naturalis Historia:

Roman Italia (in green) as organized by Augustus. 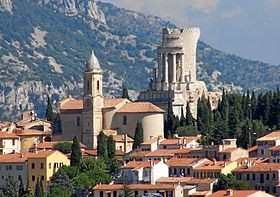 The Tropaeum Alpium The Victory Monument of the Alps, La Turbie,France, marked the augustan border between Italy and Gaul 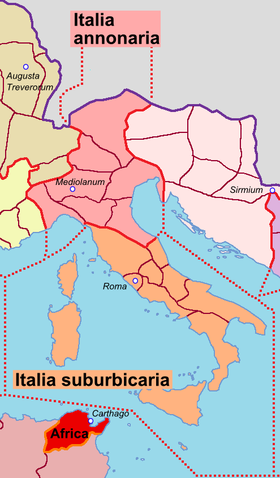 Italy was privileged by Augustus and his heirs, with the construction, among other public structures, of a dense network of Roman roads. The Italian economy flourished: agriculture, handicraft and industry had a sensible growth, allowing the export of goods to the other provinces.[citation needed] The Italian population may have grown as well: three census were ordered by Augustus, to record the number of Roman citizens throughout the empire. The surviving totals were 4,063,000 in 28 BC, 4,233,000 in 8 BC, and 4,937,000 in AD 14, but it is still debated whether these counted all citizens, all adult male citizens, or citizens sui iuris.[7] Estimates for the population of mainland Italy, including Cisalpine Gaul, at the beginning of the 1st century range from 6,000,000 according to Karl Julius Beloch in 1886, to 14,000,000 according to Elio Lo Cascio in 2009.[8]

In 212, when the Edict of Caracalla gave the Roman citizenship to all the people within the empire regardless of their ethnicity or social status, Italy began to decline in favour of the provinces. The following crisis of the Third Century was a period in which the Roman Empire nearly collapsed under the combined pressures of invasion, civil war, plague, and economic depression. In 284, the rise of Diocletian began a series of reforms to restore civil order. He divided the Empire into four parts and several dioceses, the so-called Tetrarchy. Though still keeping Rome as the official capital, he chose two other residences for the Augusti: Maximian, who was responsible for the West, was installed at Milan in northern Italy, in order to prevent German invasions; Diocletian established himself at Nicomedia, in Anatolia and close to the Persian frontier, in order to keep watch on the East.

Under Constantine's reign, the Diocesis Italiae was eventually subdivided into two zones:

In 330 AD, Constantine moved the capital of the empire to Constantinople, with the imperial court, economical administration, as well as the military structures (as the Roman fleets in Misenum and Ravenna). After the death of Theodosius in 395 AD and the subsequent division of the empire, Italy became part of the Western Roman Empire. Then came the years of the barbarian invasions, and the western capital was moved from Mediolanum to Ravenna in 402 AD. Alaric, king of Visigoths, sacked Rome itself in 410 AD; something that hadn't happened for eight centuries. Northern Italy was attacked by Attila's Huns, and Rome was sacked again by the Vandals under the command of Genseric in 455 AD. 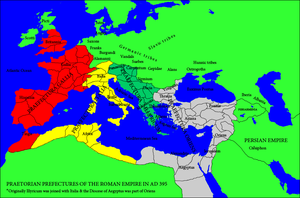 According to Notitia Dignitatum, one of the very few surviving documents of Roman government updated to 420s, Roman Italy was governed by a praetorian prefect, Prefectus praetorio Italiae (who also governed the Diocese of Africa and the Diocese of Pannonia), one vicarius, and one comes rei militaris. Later, the Germanic successor states under Odoacer and Theodoric the Great continued to use the Roman administrative machinery, as well as being nominal subjects of the Eastern emperor at Constantinople. The "Prefecture of Italy" thus survived, and came again into Roman hands after Justinian's Gothic War.

In the fifth century, with the Emperors controlled by their barbarian generals, the imperial government weakly controlled Italy, whose coasts were continuously under attack. In 476 AD, with the resignation of Romulus Augustulus, the Western Roman Empire had formally fallen. For 77 years, Italy stayed united first under Odoacer, then under the Ostrogothic Kingdom. In 554 AD, Eastern Roman Emperor Justinian I reconquered Italy keeping in general the organization of Diocletian, but during the Lombard invasion in 568 AD, the Byzantines were to lose most of Italy, except the territories of the Exarchate of Ravenna.