A sundial is a device that measures time by using a light spot or shadow cast by the position of the Sun on a reference scale.[1] As the earth turns on its polar axis, the sun appears to cross the sky from east to west, rising at sun-rise from beneath the horizon to a zenith at mid-day and falling again behind the horizon at sunset. Both the azimuth (direction) and the altitude (height) can be used to create time measuring devices. Sundials have been invented independently in all major cultures and become more accurate and sophisticated as the culture developed. [2]

A sundial measures local solar time. Before the coming of the railways in the 1830s and 1840s, local time was displayed on a sundial and was used by the government and commerce. Before the invention of the clock the sundial was the only source of time, after the invention, the sundial became more important as the clock needed to be reset regularly from a sundial- as its accuracy was poor. A clock and a dial were used together to measure longitude. Dials were laid out using straight edges and compasses. In the late nineteenth century sundials became objects of academic interest. The use of logarithms allowed algebraic methods of laying out dials to be employed and studied. No longer utilitarian, sundials remained as popular ornaments, and several popular books promoted that interest- and gave constructional details. Affordable scientific calculators made the algebraic methods as accessible as the geometric constructions- and the use of computers made dial plate design trivial. The heritage of sundials was recognised and sundial societies were set up worldwide, and certain legislations made studying sundials part of their national school curriculums. [2] 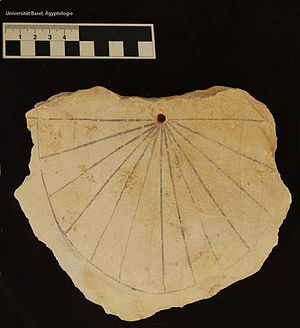 World's oldest sundial, from Egypt's Valley of the Kings (c. 1500 BC), used to measure work hours.

The earliest sundials known from the archaeological finds are the shadow clocks (1500 BC) in ancient Egyptian astronomy and Babylonian astronomy. Not, as incorrectly suggested, obelisks at the temples only serving as a memorial in honor of the pharaoh to whom it was devoted.[3] Presumably, humans were telling time from shadow-lengths at an even earlier date, but this is hard to verify. In roughly 700 BC, the [Old Testament] describes a sundial — the "dial of Ahaz" mentioned in Isaiah 38:8 and II Kings (possibly the earliest account of a sundial that is anywhere to be found in history) — which was likely of Egyptian or Babylonian design. Sundials are believed to have existed in China since ancient times, but very little is known of their history.[4] There is an early reference to sundials from 104 BCE in an assembly of calendar experts.[5] 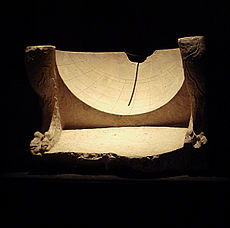 The ancient Greeks developed many of the principles and forms of the sundial. Sundials are believed to have been introduced into Greece by Anaximander of Miletus, c. 560 BC. According to Herodotus, the Greeks sundials were initially derived from the Babylonian counterparts. The Greeks were well-positioned to develop the science of sundials, having founded the science of geometry, and in particular discovering the conic sections that are traced by a sundial nodus. The mathematician and astronomer Theodosius of Bithynia (ca. 160 BC-ca. 100 BC) is said to have invented a universal sundial that could be used anywhere on Earth.

The Romans adopted the Greek sundials, and the first record of a sun-dial in Rome is 293 BC according to Pliny.[6] Plautus complained in one of his plays about his day being "chopped into pieces" by the ubiquitous sundials. Writing in ca. 25 BC, the Roman author Vitruvius listed all the known types of dials in Book IX of his De Architectura, together with their Greek inventors.[7] All of these are believed to be nodus-type sundials, differing mainly in the surface that receives the shadow of the nodus or is it.

The Romans built a very large sundial in 10 BC, the Solarium Augusti, which is a classic nodus-based obelisk casting a shadow on a planar pelekinon.[8]

The custom of measuring time by one's shadow has persisted since ancient times. In Aristophanes' play, Assembly of Women, Praxagora asks her husband to return when his shadow reaches 10 feet (3.0 m). The Venerable Bede is reported to have instructed his followers in the art of telling time by interpreting their shadow lengths. However, Bede's important association with sundials is that he encouraged the use of canonical sundials to fix the times of prayers.

The Greek dials were inherited and developed further by the Islamic Caliphate cultures and the post-Renaissance Europeans. Since the Greek dials were nodus-based with straight hour-lines, they indicated unequal hours — also called temporary hours — that varied with the seasons, since every day was divided into twelve equal segments; thus, hours were shorter in winter and longer in summer. The idea of using hours of equal time length throughout the year was the innovation of Abu'l-Hasan Ibn al-Shatir in 1371, based on earlier developments in trigonometry by Muhammad ibn Jābir al-Harrānī al-Battānī (Albategni). Ibn al-Shatir was aware that "using a gnomon that is parallel to the Earth's axis will produce sundials whose hour lines indicate equal hours on any day of the year." His sundial is the oldest polar-axis sundial still in existence. The concept later appeared in Western sundials from at least 1446.[9][2]

The oldest sundial in England is incorporated into the Bewcastle Cross ca. early 8th Century AD.

The onset of the Renaissance saw an explosion of new designs. Italian astronomer Giovanni Padovani published a treatise on the sundial in 1570, in which he included instructions for the manufacture and laying out of mural (vertical) and horizontal sundials. Giuseppe Biancani's Constructio instrumenti ad horologia solaria (ca. 1620) discusses how to make a perfect sundial, with accompanying illustrations.

The dials of Giovanni Francesco Zarbula

Painted vertical declining dials in villages around Briançon, Hautes-Alpes, France. There are 400 painted dials in this one French department dating form the 18th and 19th centuries. The most famous sundial maker was Giovanni Francesco Zarbula (fr) who created a hundred of them between 1833 and 1881.

Designers of the Taipei 101, the first record-setting skyscraper of the 21st century, brought the ancient tradition forward. The tower, tallest in the world when it opened in Taiwan in 2004, stands over half a kilometer in height. The design of an adjoining park uses the tower as the style for a huge horizontal sundial.