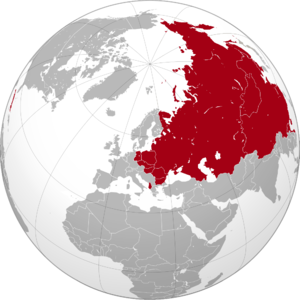 The USSR: the maximum extent of the Soviet sphere of influence, after the Cuban Revolution (1959) and before the Sino-Soviet split (1961).

In the USSR, the eleven-year period from the death of Joseph Stalin (1953) to the political ouster of Nikita Khrushchev (1964), the national politics were dominated by the Cold War; the ideological U.S.–USSR struggle for the planetary domination of their respective socio–economic systems, and the defense of hegemonic spheres of influence. Nonetheless, since the mid-1950s, despite the Communist Party of the Soviet Union (CPSU) having disowned Stalinism, the political culture of Stalinism—an omnipotent General Secretary, anti-Trotskyism, a five-year planned economy (post-New Economic Policy), and repudiation of the Molotov–Ribbentrop Pact secret protocols—remained the character of Soviet society until the accession of Mikhail Gorbachev as leader of the CPSU in 1985.

De-Stalinization and the Khrushchev era

After Stalin died in March 1953, he was succeeded by Nikita Khrushchev as First Secretary of the Central Committee of the Communist Party of the Soviet Union (CPSU) and Georgi Malenkov as Premier of the Soviet Union. However the central figure in the immediate post-Stalin period was the former head of the state security apparatus, Lavrentiy Beria.

Beria, despite his record as part of Stalin's terror state, initiated a period of relative liberalization, including the release of some political prisoners. The leadership also began allowing some criticism of Stalin, saying that his one-man dictatorship went against the principles laid down by Vladimir Lenin. The war hysteria that characterized his last years was toned down, and government bureaucrats and factory managers were ordered to wear civilian clothing instead of military-style outfits. Estonia, Latvia and Lithuania were given serious prospects of national autonomy, possibly similarly to other Soviet satellite states in Europe.[1][2][3]

However, the Politburo members disliked and feared Beria for his role under Stalin and with the support of the armed forces, had him arrested three months after Stalin's death. At the end of the year, he was shot following a show trial where he was accused of spying for the West, committing sabotage, and plotting to restore capitalism. The secret police were disarmed and reorganized into the KGB, ensuring that they were completely under the control of the party and would never again be able to wage mass terror. In the post-Beria period, Khrushchev rapidly began to emerge as the key figure.

The new leadership declared an amnesty for some serving prison sentences for criminal offenses, announced price cuts, and relaxed the restrictions on private plots. De-Stalinization also spelled an end to the role of large-scale forced labor in the economy.

During a period of collective leadership, Khrushchev gradually rose to power. At a closed session of the Twentieth Party Congress of the CPSU on 25 February 1956, Khrushchev shocked his listeners by denouncing Stalin's dictatorial rule and cult of personality in a speech entitled On the Cult of Personality and its Consequences. He also attacked the crimes committed by Stalin's closest associates. Furthermore, he stated that the orthodox view of war between the capitalist and communist worlds being inevitable was no longer true. He advocated competition with the West rather than outright hostility, stating that capitalism would decay from within and that world socialism would triumph peacefully. But, he added, if the capitalists did desire war, the Soviet Union would respond in kind.

The impact on Soviet politics was immense. The speech stripped the legitimacy of his remaining Stalinist rivals, dramatically boosting his power domestically. Afterwards, Khrushchev eased restrictions, freeing millions of political prisoners (the Gulag population declined from 13 million in 1953 to 5 million in 1956–57, and the vast majority of the remaining inmates were common criminals).[citation needed] Communists around the world were as shocked and confused by his condemnation of Stalin as they had been in 1939 by the Molotov–Ribbentrop Pact.[citation needed]

Khrushchev initiated "The Thaw" better known as Khrushchev Thaw, a complex shift in political, cultural and economic life in the Soviet Union. That included some openness and contact with other countries and new social and economic policies with more emphasis on commodity goods, allowing living standards to rise dramatically while maintaining high levels of economic growth. Censorship was relaxed as well. Some subtle critiques of the Soviet society were tolerated, and artists were not expected to produce only works which had government-approved political context. Still, artists, most of whom were proud of both the country and the Party, were careful not to get into trouble. On the other hand, he reintroduced aggressive anti-religious campaigns, closing down many houses of worship.

Such loosening of controls also caused an enormous impact on other socialist countries in Central Europe, many of which were resentful of Soviet influence in their affairs. Riots broke out in Poland in the summer of 1956, which led to reprisals from national forces there. A political convulsion soon followed, leading to the rise of Władysław Gomułka to power in October. This almost triggered a Soviet invasion when Polish Communists elected him without consulting the Kremlin in advance, but in the end, Khrushchev backed down due to Gomułka's widespread popularity in the country. Poland would still remain a member of the Warsaw Pact (established a year earlier), and in return, the Soviet Union seldom intervened in its neighbors' domestic and external affairs. Khrushchev also began reaching out to newly independent countries in Asia and Africa, which was in sharp contrast to Stalin's Europe-centered foreign policy. And in September 1959, he became the first Soviet leader to visit the US.

The following year Khrushchev defeated a concerted Stalinist attempt to recapture power, decisively defeating the so-called "Anti-Party Group". This event also illustrated the new nature of Soviet politics—the most decisive attack on the Stalinists was delivered by defense minister Georgy Zhukov, and the implied threat to the plotters was clear; however, none of the "anti-party group" were killed or even arrested, and Khrushchev disposed of them quite cleverly: Georgy Malenkov was sent to manage a power station in Kazakhstan, and Vyacheslav Molotov, one of the most die-hard Stalinists, was made ambassador to Mongolia and later the Soviet representative to the International Atomic Energy Agency.

Khrushchev became premier on March 27, 1958, consolidating his power—the tradition followed by all his predecessors and successors. This was the final stage in the transition from the earlier period of post-Stalin collective leadership. He was now the ultimate source of authority in the Soviet Union, but would never possess the absolute power Stalin had.

Aid to developing countries and scientific research, especially into space technology and weaponry, maintained the Soviet Union as one of the world's two major world powers. The Soviet Union launched the first ever artificial Earth satellite in history, Sputnik 1, which orbited the Earth in 1957. The Soviets also sent the first man into space, Yuri Gagarin, in 1961.

Khrushchev outmaneuvered his Stalinist rivals, but he was regarded by his political enemies—especially the emerging caste of professional technocrats—as a boorish peasant who would interrupt speakers to insult them. Incidents such as pounding his shoe on a table at the UN in 1960 and red-faced rants against the West and intellectuals were a source of grave embarrassment to Soviet politicians.[citation needed]

Throughout his years of leadership, Khrushchev attempted to carry out reform in a range of fields. The problems of Soviet agriculture, a major concern of Khrushchev's, had earlier attracted the attention of the collective leadership, which introduced important innovations in this area of the Soviet economy. The state encouraged peasants to grow more on their private plots, increased payments for crops grown on collective farms, and invested more heavily in agriculture.

Khrushchev continued to believe in the theories of the biologist Trofim Lysenko, a carryover from the Stalin era. In his Virgin Lands Campaign in the mid-1950s, he opened many tracts of land to farming in Kazakhstan and neighboring areas of Russia. These new farmlands turned out to be susceptible to droughts, but in some years they produced excellent harvests. Later agricultural reforms by Khrushchev, however, proved counterproductive. His plans for growing corn and increasing meat and dairy production failed, and his reorganization of collective farms into larger units produced confusion in the countryside.

In a politically motivated move to weaken the central state bureaucracy in 1957, Khrushchev did away with the industrial ministries in Moscow and replaced them with regional economic councils (sovnarkhozes).

Although he intended these economic councils to be more responsive to local needs, the decentralization of industry led to disruption and inefficiency.[citation needed] Connected with this decentralization was Khrushchev's decision in 1962 to recast party organizations along economic, rather than administrative, lines. The resulting bifurcation of the party apparatus into industrial and agricultural sectors at the oblast (province) level and below contributed to the disarray and alienated many party officials at all levels. Symptomatic of the country's economic difficulties was the abandonment in 1963 of Khrushchev's special seven-year economic plan (1959–65) two years short of its completion.

In defense policy, Khrushchev began cutting the military's budget, feeling that the Soviet nuclear arsenal was an adequate deterrent to outside aggression. This had a practical reason in that there was a shortage of military-age men due to the lower birth rate of the 1940s, but it alienated key figures in the Soviet military establishment and culminated in the fiasco (in Soviet eyes) of the Cuban Missile Crisis. Despite large reductions in Soviet conventional forces since 1956, the ongoing crisis in Berlin, partially resolved via the construction of the Berlin Wall, made under initiative of the East German authorities, created a source of tension with the West.

Khrushchev's boasts about Soviet missile forces provided John F. Kennedy with a key issue to use against Richard Nixon in the 1960 U.S. presidential election—the so-called 'missile gap'. But all Khrushchev's (probably sincere) attempts to build a strong personal relationship with the new president failed, as his typical combination of bluster, miscalculation and mishap resulted in the Cuban fiasco. After the Berlin and Cuba crises, tensions tapered off between the two superpowers.

By 1964, Khrushchev's prestige had been damaged in a number of areas. While industrial production, living standards and consumer goods were still growing at a very rapid pace, the agricultural sector faced a bad harvest in 1963. Abroad, the split with China, the construction of the Berlin Wall, and the Cuban Missile Crisis hurt Khrushchev's prestige in his own country, and his efforts to improve relations with the West antagonized many in the military. Lastly, the 1962 party reorganization caused turmoil throughout the Soviet political chain of command. Power started going to his head, and he began to act more autocratically than before. He was also the subject of a growing personality cult, which was noticeable at the celebrations of his 70th birthday in April 1964. Furthermore, he travelled outside the country constantly, which allowed plots to be formed against him.

In October 1964, while Khrushchev was on holiday in Crimea, the Presidium unanimously voted him out of office and refused to permit him to take his case to the Central Committee. He retired as a private citizen after an editorial in Pravda denounced him for "hare-brained schemes, half−baked conclusions, hasty decisions, and actions divorced from reality." However, Khrushchev must also be remembered for his public disavowal of Stalinism, significant liberalization in the country, and the greater flexibility he brought to Soviet leadership.