A Hiwi ([ˈhiːviː]) was a foreigner who volunteered to serve the Nazis. The name Hiwis acquired a thoroughly negative meaning following Operation Barbarossa in World War II. Between September 1941 and July 1944 the SS employed thousands of collaborationist auxiliary police recruited as German Hiwis directly from the Soviet POW camps. After training, they were deployed for service with Nazi Germany in the General Government and the occupied East.[1]

In one instance, the German SS and police inducted, processed, and trained 5,082 Hiwi guards before the end of 1944 at the SS training camp division of the Trawniki concentration camp set up in the village of Trawniki southeast of Lublin. They were known as the "Trawniki men" (German: Trawnikimänner). Trawnikis were sent to all major killing sites of the "Final Solution", which was their primary purpose of training. They took an active role in the executions of Jews at Belzec, Sobibor, Treblinka II, Warsaw (three times), Częstochowa, Lublin, Lvov, Radom, Kraków, Białystok (twice), Majdanek as well as Auschwitz, not to mention Trawniki itself.[2][3][4] 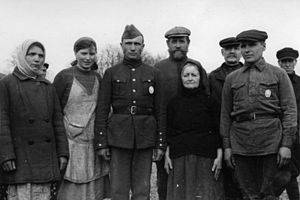 Russia, January 1942, two volunteers of the Wehrmacht decorated with the General Assault Badge. 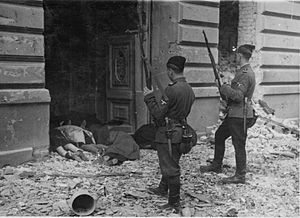 May 1943, Trawniki volunteers during the shooting action in the Warsaw Ghetto. Photo from Jürgen Stroop Report

Hiwi is a German abbreviation of the term "voluntary assistant" or Hilfswilliger, "willing to help". The word entered into several other languages during World War II when the German troops began to enlist volunteers from the occupied territories for supplementary service in a number of roles including drivers, cooks, hospital attendants, ammunition carriers, messengers, sappers, etc.

In the context of World War II the term has clear connotations of collaborationism, and in the case of the occupied Soviet territories also of anti-Bolshevism (widely presented as such by the Germans). A captured Hiwi told his People's Commissariat for Internal Affairs (Narodnyy Komissariat Vnutrennikh Del, or NKVD) interrogators:

Russians in the German Army can be divided into three categories. Firstly, soldiers mobilized by German troops, so-called Cossack sections, which are attached to German divisions. Secondly, Hilfswillige [Voluntary Assistants] made up of local people or Russian prisoners who volunteer, or those Red Army soldiers who desert to join the Germans. This category wears full German uniform, with their own ranks and badges. They eat like German soldiers and they are attached to German regiments. Thirdly, there are Russian prisoners who do the dirty jobs, kitchens, stables and so on. These three categories are treated in different ways, with the best treatment naturally reserved for the volunteers.[5]

Soviet authorities referred to the Hiwis as "former" Russians regardless of the circumstances of their joining or their fate at the hands of the NKVD secret police.[6] After the war, thousands of them returned to their homes in the USSR. They were captured and prosecuted by the hundreds, charged with treason and therefore guilty of enlistment from the start of judicial proceedings.[2] Most were sentenced to the Gulags, and released under the Khrushchev amnesty of 1955.[7]

The reliance upon Hiwis exposed a gap between Nazi ideologues and pragmatic German Army commanders. Nazi leaders including Adolf Hitler regarded all Russians as the Untermenschen and therefore of limited value as volunteers also. On the other hand, the manpower was needed,[8] and German Intelligence had recognised the need to divide the Soviet nationals. The contradiction was sometimes disguised by reclassification of Russians as the Cossacks.[9] Colonel Helmuth Groscurth (Chief of Staff, XI Corps) wrote to General Beck: "It is disturbing that we are forced to strengthen our fighting troops with Russian prisoners of war, who are already being turned into gunners. It's an odd state of affairs that the "Beasts" we have been fighting against are now living with us in closest harmony."[10] The Hiwis constituted one quarter of 6th Army's front-line strength, amounting to over 50,000 Russian auxiliaries serving with the Germans.[10]