From Infogalactic: the planetary knowledge core
(Redirected from Ho'oponopono)
Jump to: navigation, search

Hoʻoponopono (ho-o-pono-pono) is an ancient Hawaiian practice of reconciliation and forgiveness. Similar forgiveness practices were performed on islands throughout the South Pacific, including Samoa, Tahiti and New Zealand. Traditionally hoʻoponopono is practiced by healing priests or kahuna lapaʻau among family members of a person who is physically ill. Modern versions are performed within the family by a family elder, or by the individual alone. 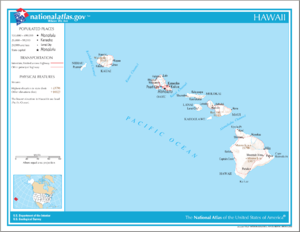 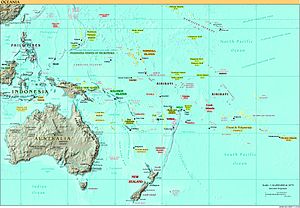 In many Polynesian cultures, it is believed that a person's errors (called hara or hala) caused illness. Some believe error angers the gods, others that it attracts malevolent gods, and still others believe the guilt caused by error made one sick. "In most cases, however, specific 'untie-error' rites could be performed to atone for such errors and thereby diminish one's accumulation of them."[1]

Among the islands of Vanuatu in the South Pacific, people believe that illness usually is caused by sexual misconduct or anger. "If you are angry for two or three days, sickness will come," said one local man.[2] The therapy that counters this sickness is confession. The patient, or a family member, may confess. If no one confesses an error, the patient may die. The Vanuatu people believe that secrecy is what gives power to the illness. When the error is confessed, it no longer has power over the person.[3]

Like many other islanders, including Hawaiians, people of Tikopia in the Solomon Islands, and on Rarotonga in the Cook Islands, believe that the sins of the father will fall upon the children. If a child is sick, the parents are suspected of quarreling or misconduct. In addition to sickness, social disorder could cause sterility of land or other disasters.[4] Harmony could be restored only by confession and apology.

In Pukapuka, it was customary to hold sort of a confessional over patients to determine an appropriate course of action in order to heal them.[5]

File:Hala lei.JPG
A lei made from the fruit of the hala or pandanus tree. A hala lei was given at the completion of hoʻoponopono in the tradition of kahuna Makaweliweli of Molokaʻi 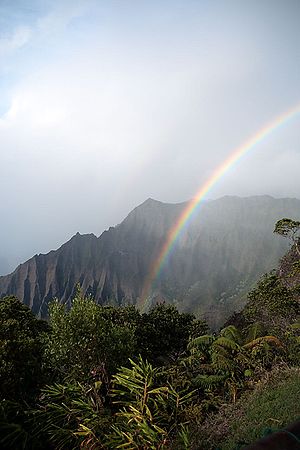 "Hoʻoponopono" is defined in the Hawaiian Dictionary[11] as "mental cleansing: family conferences in which relationships were set right through prayer, discussion, confession, repentance, and mutual restitution and forgiveness." Literally, hoʻo is a particle used to make an actualizing verb from the following noun, as would "to" before a noun in English. Here, it creates a verb from the noun pono, which is defined as:

Ponopono is defined as "to put to rights; to put in order or shape, correct, revise, adjust, amend, regulate, arrange, rectify, tidy up, make orderly or neat".

Preeminent Hawaiian scholar Mary Kawena Pukui wrote that it was a practice in Ancient Hawaii[12] and this is supported by oral histories from contemporary Hawaiian elders.[13] Pukui first recorded her experiences and observations from her childhood (born 1895) in her 1958 book.[14] Author Max Freedom Long, who lived in Hawaiʻi from 1917 to about 1926, documented traditional hoʻoponopono as used by Hawaiian families in his 1936 book.[15]

Although the word hoʻoponopono was not used, early Hawaiian historians documented a belief that illness was caused by breaking kapu, or spiritual laws, and that the illness could not be cured until the sufferer atoned for this transgression, often with the assistance of a praying priest (kahuna pule) or healing priest (kahuna lapaʻau). Forgiveness was sought from the gods[16][17] or from the person with whom there was a dispute.[18]

Pukui described it as a practice of extended family members meeting to "make right" broken family relations. Some families met daily or weekly, to prevent problems from erupting.[19] Others met when a person became ill, believing that illness was caused by the stress of anger, guilt, recriminations and lack of forgiveness.[20] Kupuna Nana Veary wrote that when any of the children in her family fell ill, her grandmother would ask the parents, "What have you done?" They believed that healing could come only with complete forgiveness of the whole family.[21]

Hoʻoponopono corrects, restores and maintains good relationships among family members and with their gods or God by getting to the causes and sources of trouble. Usually the most senior member of the family conducts it. He or she gathers the family together. If the family is unable to work through a problem, they turn to a respected outsider.

The process begins with prayer. A statement of the problem is made, and the transgression discussed. Family members are expected to work problems through and cooperate, not "hold fast to the fault". One or more periods of silence may be taken for reflection on the entanglement of emotions and injuries. Everyone's feelings are acknowledged. Then confession, repentance and forgiveness take place. Everyone releases (kala) each other, letting go. They cut off the past (ʻoki), and together they close the event with a ceremonial feast, called pani, which often included eating limu kala or kala seaweed, symbolic of the release.[22]

In a form used by the family of kahuna Makaweliweli of the island of Molokaʻi, the completion of hoʻoponopono is represented by giving the person forgiven a lei made from the fruit of the hala tree.[23]

"Aunty" Malia Craver, who worked with the Queen Liliʻuokalani Children's Centers (QLCC) for more than 30 years, taught courses in traditional hoʻoponopono. On August 30, 2000, she spoke about it to the United Nations.[24]

In the late 20th century, courts in Hawaiʻi began to order juvenile and adult offenders to work with an elder who would conduct hoʻoponopono for their families, as a form of alternative dispute resolution. The hoʻoponopono is conducted in the traditional way, without court interference, with a practitioner picked by the family from a list of court-approved providers.[25]

Some native practitioners provide hoʻoponopono to clients who otherwise might seek family counseling.[26]

File:Lapakahi3.jpg
The site of the partially restored remains of the village of Koaiʻe in the Lapakahi State Historical Park of the island of Hawaii, North Kohala district. Beginning in the early 20th century, this village has been a center for lapaʻau

In 1976 Morrnah Simeona, regarded as a healing priest or kahuna lapaʻau, adapted the traditional hoʻoponopono of family mutual forgiveness to the social realities of the modern day. For this she extended it both to a general problem solving process outside the family and to a psycho-spiritual self-help rather than group process.

Simeona's version is influenced by her Christian (Protestant and Catholic) education and her philosophical studies about India, China and Edgar Cayce. Like Hawaiian tradition she emphasizes prayer, confession, repentance, and mutual restitution and forgiveness. Unlike Hawaiian tradition, she describes problems only as the effects of negative Karma, saying that "you have to experience by yourself what you have done to others." But that you are the creator of your life circumstances was common knowledge for the people of old as "things we had brought with us from other lifetimes."[27] Any wrongdoing is memorized within oneself and mirrored in every entity and object which was present when the cause happened. As the Law of Cause and Effect predominates in all of life and lifetimes, the purpose of her version is mainly "to release unhappy, negative experiences in past Reincarnations, and to resolve and remove traumas from the 'memory banks'."[28] Karmic bondages hinder the evolution of mind, so that "(karmic) cleansing is a requisite for the expansion of awareness".[29] Using her 14-step-process would dissolve those bondages.[30] She did not use mantras or conditioning exercises.

Her teachings include: there is a Divine Creator who takes care of altruistic pleas of Men; "when the phrase 'And it is done' is used after a prayer, it means Man's work ends and God's begins."[31] "Self-Identity" signifies, e.g. during the hoʻoponopono, that the three selves or aspects of consciousness are balanced and connected with the Divine Creator.[32] Different from egoistic prayers, "altruistic prayers like hoʻoponopono, where you also pray for the release of other entities and objects, reach the Divine plane or Cosmos because of their high vibrations. From that plane the Divine energy or "mana" would come,"[33] which would transform the painful part of the memory of the wrong actions in all participants to "Pure Light", on whatever plane they are existing; "all are set free".[34] Through this transmutation in the mind the problems will lose their energy for physical effects, and healing or balancing is begun. In this sense, Simeona's mana is not the same as the traditional Polynesian understanding of Mana.

After Simeona's passing in 1992, her former student and administrator Ihaleakala Hew Len, co-authored a book with Joe Vitale called Zero Limits[38] referring to Simeona's hoʻoponopono teachings. Len makes no claim to be a kahuna although Timothy Freke, in the book Shamanic Wsidomkeepers [39] implies that he is a Kahuna by beginning the chapter on Hew Len talking about the role of a Hawaiian shaman or Kahuna, and then moving on to talk about Hew Len. In contrast to Simeona's teachings, the book "Zero Limits" brings the new idea that the main objective of hoʻoponopono is getting to "the state of Zero, where we would have zero limits. No memories. No identity."[40] To reach this state, which Len called 'Self-I-Dentity', one has to repeat constantly, according to Joe Vitale's interpretation, the mantra, "I love you. I'm sorry. Please forgive me. Thank you."[41] It is based on Len's idea of 100% responsibility,[42] taking responsibility for everyone's actions (once again according to Joe Vitale's interpretation), not only for one's own. If one would take complete responsibility for one's life, then everything one sees, hears, tastes, touches, or in any way experiences would be one's responsibility because it is in one's life.[43] The problem would not be with our external reality, it would be with ourselves. To change our reality, we would have to change ourselves. Total Responsibility, according to Hew Len, advocates that everything exists as a projection from inside the human being.[44] As such, it is similar to the philosophy of solipsism, but differs in that it does not deny the reality of the consciousness of others. Instead, it views all consciousness as part of the whole, so using parts of the idea of holism: any error that a person clears in their own consciousness should be cleared for everyone.