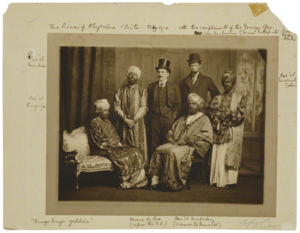 The Dreadnought hoaxers in Abyssinian regalia; the bearded figure on the far left is in fact the writer Virginia Woolf.

A hoax is a deliberately fabricated falsehood made to masquerade as truth.[1] It is distinguishable from errors in observation or judgment,[1] or rumors, urban legends, pseudosciences or April Fools' Day events that are passed along in good faith by believers or as jokes.[2]

Whereas the promoters of frauds, fakes, and scams devise them so that they will withstand the highest degree of scrutiny customary in the affair, hoaxers are confident, justifiably or not, that their representations will receive no scrutiny at all. They have such confidence because their representations belong to a world of notions fundamental to the victims' views of reality, but whose truth and importance they accept without argument or evidence, and so never question.

The English philologist Robert Nares (1753–1829) says that the word hoax was coined in the late 18th century as a contraction of the verb hocus, which means "to cheat",[3] "to impose upon"[3] or "to befuddle often with drugged liquor".[4] Hocus is a shortening of the magic incantation hocus pocus,[4] whose origin is disputed.[5]

Thomas Ady's A candle in the dark ... (1656) contains one of the earliest mentions of hocus pocus, the origin of the word hoax.[6]

Robert Nares defined the word hoax as meaning "to cheat", dating from Thomas Ady's 1656 book A candle in the dark, or a treatise on the nature of witches and witchcraft.[6]

The term hoax is occasionally used in reference to urban legends and rumors, but the folklorist Jan Harold Brunvand argues that most of them lack evidence of deliberate creations of falsehood and are passed along in good faith by believers or as jokes, so the term should be used for only those with a probable conscious attempt to deceive.[2] As for the closely related terms practical joke and prank, Brunvand states that although there are instances where they overlap, hoax tends to indicate "relatively complex and large-scale fabrications" and includes deceptions that go beyond the merely playful and "cause material loss or harm to the victim".[7]

According to Professor Lynda Walsh of the University of Nevada, Reno, some hoaxes—such as the Great Stock Exchange Fraud of 1814, labeled as a hoax by contemporary commentators—are financial in nature, and successful hoaxers—such as P. T. Barnum, whose Fiji mermaid contributed to his wealth—often acquire monetary gain or fame through their fabrications, so the distinction between hoax and fraud is not necessarily clear.[8] Alex Boese, the creator of the Museum of Hoaxes, states that the only distinction between them is the reaction of the public, because a fraud can be classified as a hoax when its method of acquiring financial gain creates a broad public impact or captures the imagination of the masses.[9]

One of the earliest recorded media hoaxes is a fake almanac published by Jonathan Swift under the pseudonym of Isaac Bickerstaff in 1708.[10] Swift predicted the death of John Partridge, one of the leading astrologers in England at that time, in the almanac and later issued an elegy on the day Partridge was supposed to have died. Partridge's reputation was damaged as a result and his astrological almanac was not published for the next six years.[10]

It is possible to perpetrate a hoax by making only true statements using unfamiliar wording or context, such as in the Dihydrogen monoxide hoax. Political hoaxes are sometimes motivated by the desire to ridicule or besmirch opposing politicians or political institutions, often before elections.

A hoax differs from a magic trick or from fiction (books, movies, theatre, radio, television, etc.) in that the audience is unaware of being deceived, whereas in watching a magician perform an illusion the audience expects to be tricked.

A hoax is often intended as a practical joke or to cause embarrassment, or to provoke social or political change by raising people's awareness of something. It can also emerge from a marketing or advertising purpose. For example, to market a romantic comedy movie, a director staged a phony "incident" during a supposed wedding, which showed a bride and preacher getting knocked into a pool by a clumsy fall from a best man.[11] A resulting video clip of Chloe and Keith's Wedding was uploaded to YouTube and was viewed by over 30 million people and the couple was interviewed by numerous talk shows.[11] Viewers were deluded into thinking that it was an authentic clip of a real accident at a real wedding; but a story in USA Today in 2009 revealed it was a hoax.[11]

A borderline case between fiction and hoax is a 1938 radio broadcast by Orson Welles describing a Martian invasion of earth. Many people who tuned in without hearing the introduction of the program as fiction were concerned that the invasion was real. It has been suggested that Welles knew the schedule of a popular program on another channel, and scheduled the first report of the invasion to coincide with a commercial break in the other program so that people switching stations would be tricked.

Governments sometimes spread false information to assist them with aims such as going to war; the "Iraq dossier" is an example of this; these often come under the heading of black propaganda. There is often a mixture of outright hoax and suppression and management of information to give the desired impression. In wartime and times of international tension rumours abound, some of which may be deliberate hoaxes.

Hoaxes vary widely in their processes of creation, propagation, and entrenchment over time. For example, :