The senior Swabian branch is not as well known to history, as is the junior Franconian line which became Burgraves of Nuremberg and later ruled Brandenburg-Prussia and the German Empire. 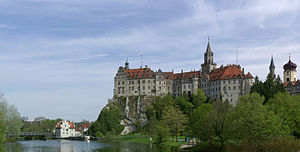 The principality became a sovereign state in 1815 after the abolition of the Holy Roman Empire in 1806 and an independent realm following the Napoleonic Wars in 1815. Its ruler, Charles, was deposed in the revolutions of 1848. His son, Karl Anton, succeeded him, and turned to Prussia for aid. Prussian troops arrived in August 1849, and in a treaty signed in December Hohenzollern-Sigmaringen was annexed by Prussia, effective in March 1850. The annexation of their state did not, however, mean the end of the importance of the House of Hohenzollern-Sigmaringen.

The last prince, Karl Anton, served as Minister President of Prussia from 1858-61. Karl Anton's second son, Karl Eitel of Hohenzollern-Sigmaringen became prince (1866–1881) and then king (1881–1914) of the Romanians, under the name Carol and the house remained on the throne until the end of the Romanian monarchy in 1947.

Because the eldest Hechingen line of the Hohenzollerns became extinct in 1869 with the death of Constantine, Prince of Hohenzollern-Hechingen, the head of the Sigmaringen branch, Karl Anton, dropped his line's suffix and took the title of Prince (Fürst) of (all) Hohenzollern.

French opposition to the candidacy of Carol's elder brother Prince Leopold for the throne of Spain triggered the Franco-Prussian War (1870–1871), which led to the founding of the German Empire in January 1871. 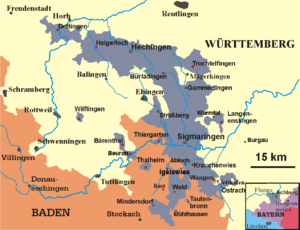 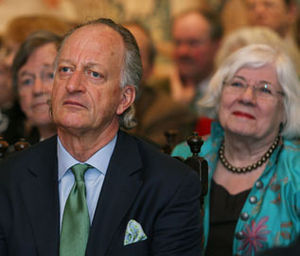 The head of the Swabian branch of Hohenzollern-Sigmaringen ruled over the following territories:

From 1806 until 1813 the Hohenzollern lands were a realm of the Confederation of the Rhine, a short-lived state set up by Napoleon I Bonaparte. From 1815 until 1849 the principality was a sovereign country and a member of the German Confederation. In 1849 it lost its independence, and was incorporated into the Kingdom of Prussia as the Province of Hohenzollern.

The German Confederation was succeeded in 1866 by the North German Confederation, which itself was succeeded by the German Empire in 1871. In 1918, the kingdom of Prussia became the Free State of Prussia, and the German Empire was replaced by the Weimar Republic. In 1933 the republic was replaced by the Third Reich. After the defeat of the Nazis the province of Hohenzollern was merged with other territories into the state of Württemberg-Hohenzollern. This state was part of the Allied Occupation Zones in Germany until 1952. In that year, the state of Württemberg-Hohenzollern was merged into Baden-Württemberg, a state of the Federal Republic of Germany.

The head of the House of Hohenzollern-Sigmaringen is the historical heir to the titles of:

The English translation is: His Serene Highness (HSH) [Name] by the Grace of God, Prince of Hohenzollern, Burgrave of Nuremberg, Count of Sigmaringen, Veringen and Berg, Lord of Haigerloch and Wehrstein.

Prince Karl Eitel of Hohenzollern-Sigmaringen reigned and, being childless, was succeeded by his nephew Ferdinand on the throne of Romania.

The modern state of Romania was formed by merger of the principalities of Moldavia and Wallachia in 1859 under the Moldavian domnitor Alexandru Ioan Cuza. He was replaced by Karl Eitel of Hohenzollern-Sigmaringen in 1866, who mounted the throne as Carol I, Prince of Romania.

During the Russo-Turkish War, Romania fought on the Russian side. In the 1878 Treaty of Berlin, Romania was subsequently recognized as an independent state by the Great Powers.

In return for reverting to the Russian Empire three southern Bessarabian districts that had been regained by Moldavia after the Crimean War in 1852, Northern Dobruja was acquired.

In 1881, the principality was raised to a kingdom and Prince Carol became King Carol I. He reigned until his death in 1914, and was succeeded by his nephew, Ferdinand. Shortly after taking the throne, Ferdinand, a Roman Catholic like his predecessor, agreed to have his children reared in the Romanian Orthodox Church.

In 1918 Transylvania and Bessarabia were incorporated. In 1918-19, confirmed by the Treaty of Versailles of 1919 and the Treaty of Trianon of 1920, most of the Banat became part of Romania. Also, Bukovina was incorporated in 1918.

On 10 May 2011, following lawsuits brought in Germany against his family by his German relatives regarding attribution of the title Prince of Hohenzollern-Veringen to his son-in-law, Radu Duda, Michael severed dynastic ties with the princely house of Hohenzollern-Sigmaringen, changed the name of his family to "of Romania", and ceased the use of all princely titles borne by him and his family that derived from the German Hohenzollerns.[1][2]

The head of the Romanian branch continues, since abolition of the monarchy, to use the hereditary title he bore while reigning:

During the reign of Carol II of Romania his son, Michael, was styled "Măria Sa (M.S.) Marele Voievod de Alba Iulia" or the English translation "His Grace The Grand Voivode of Alba Julia".

The English translation is: His Majesty (H.M.) N.N., King of the Romanians 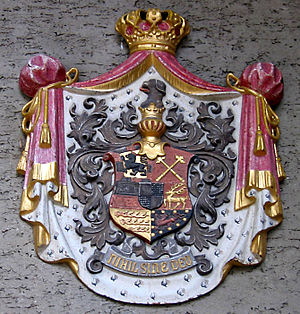 Combined coat of arms of the House of Hohenzollern-Sigmaringen (1849).

The combined coat of arms of the House of Hohenzollern-Sigmaringen is: 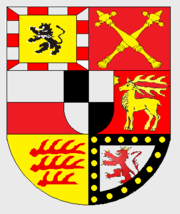 House of Hohenzollern-Sigmaringen coat of arms 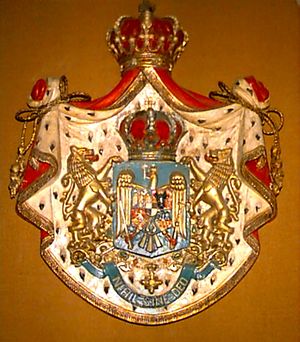 Major coat of arms of the kingdom of the Romanians (1922).

The major coat of arms of the kingdom of the Romanians consisted, from 1922 onwards, of:

Members of the House of Hohenzollern reigned as monarchs in Europe. 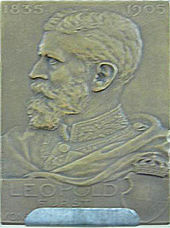 Following cession of their sovereignty over the principality to their kinsmen the Kings of Prussia in 1849, the heirs of Karl Anton continued to bear the same title, "Prince (Fürst) of Hohenzollern": 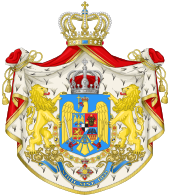 Arms of the Kingdom of Romania