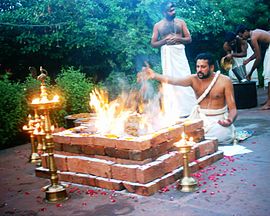 A homa being performed

Homa (also known as homam or havan) is a Sanskrit word (Sanskrit: हवन) which refers to any ritual in which making offerings into a consecrated fire is the primary action.[1] Its practice by "Rishis" in ancient time refers close to the Vedic era. At present, the words homa/homam and havan are interchangeable with the word Yajna & Agnihotra.[2]

Homas are an important religious practice in Hinduism where they are part of most Sanskar ceremonies. They are also prevalent in current-day Buddhism (particularly the Tibetan and Japanese Vajrayana traditions) and Jainism. 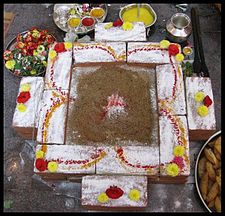 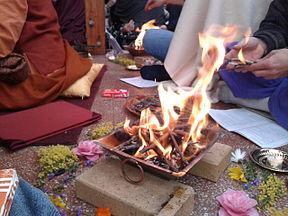 Although a consecrated fire is the central element of every homa ritual, the procedure and items offered to the fire vary by what occasions the ceremony, or by the benefit expected from the ritual. Procedures invariably involve -

The consecrated fire forms the focus of devotions; it is often maintained on specific types of dung, wood, dried coconut (copra) and/or other combustibles. The fire-altar (vedi or homa/havan kunda) is generally made of brick or stone or a copper vessel, and is almost always built specifically for the occasion, being dismantled immediately afterwards. This fire-altar is invariably built in square shape. While very large vedis are occasionally built for major public homas, the usual altar may be as small as 1 x 1 foot square and rarely exceeds 3 x 3 feet square. Again, whereas major altars at public events may include a hollowing of the earth to create a relatively deep pit, usual altars involve no such excavation and indeed rise only inches above the ground.

In all events, the arrangement is centered in the middle of a space, which may be either outdoors or indoors. The principal people performing the ceremony and the priests who instruct them through the rituals seat themselves around the altar, while family, friends and other devotees form a larger ring around that center. The length and procedure of a homa depends on the purpose to which it is performed; many different types of homas exist, and the following list is only illustrative.

Homa rituals have been performed by Vedic priests for several millennia. The following is an illustrative list of a few such homa rituals:

The purification rites of the Viraja homa ritual also apply to the formal ceremonies by which a Hindu monk takes up the vows of renunciation (Sannyas), thereby becoming a Sanyasi. The procedure is a part of the full Sannyas Diksha monastic initiation ceremony. After the Homa, the monk receives the ochre robes the characteristic dress of Hindu monks, from his teacher (guru). 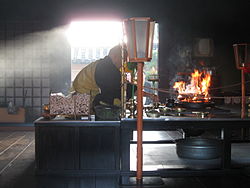 The Homa (護摩, goma) Ritual of consecrated fire is unique to Vajrayana and Esoteric Buddhism and is perhaps also the most mystical and cognitively powerful. It stems from the Vedic Agnihotra Ritual and is performed by qualified priests and acharyas for the benefit of individuals, the state or all sentient beings in general. The consecrated fire is believed to have a powerful cleansing effect spiritually and psychologically. The central deity invoked in this ritual is usually Acalanatha (Fudō Myōō 不動明王, lit. immovable wisdom king). Interestingly, the word Acalanatha is another name for Shiva in the Vedic tradition. The ritual is performed for the purpose of destroying negative energies, detrimental thoughts and desires, and for the making of secular requests and blessings; these are in the form of pieces of lumber with prayers written down by individuals and stamped with Acalanatha's seed syllable.

In most Shingon temples, this ritual is performed daily in the morning or the afternoon, and is a requirement for all acharyas to learn this ritual upon entering the priesthood. Larger scale ceremonies often include the constant beating of taiko drums and mass chanting of the mantra of Acalanatha by priests and lay practitioners. Flames can sometimes reach a few meters high. The combination of the ritual's visuals and sounds can be trance-inducing and make for a profound experience.

In the vajrayana buddhism, Fudo Myoo is one the five Radiant Kings or Wisdom Kings. But these Kings or Myoo are not protector devas but guardian demons. As Alexandra David-Néel explains buddhist monks are experts in the art of control demons and reduce them in slavery.[3]