From Infogalactic: the planetary knowledge core
Jump to: navigation, search
For other uses, see Homicide (disambiguation).

Homicide occurs when one human being causes the death of another human being.[1] Homicides can be divided into many overlapping types, including murder, manslaughter, justifiable homicide, killing in war, euthanasia, and execution, depending on the circumstances of the death. These different types of homicides are often treated very differently in human societies; some are considered crimes, while others are permitted or even ordered by the legal system.

Criminal homicide takes many forms including accidental or purposeful murder. The crime committed in a criminal homicide is determined by the mental state of the committing person and the extent of the crime. Murder, for example, is usually an intentional crime. In many cases, homicide may in fact lead to life in prison and or even capital punishment,[2] but if the defendant in a capital case is sufficiently mentally disabled in the United States he or she cannot be executed. Instead, the individual is placed under the category of "insane".

In some jurisdictions, a homicide that occurs during the commission of a crime may constitute murder, regardless of the actor's intent to commit homicide. In the United States, this is known as the felony murder rule. Much abbreviated and incomplete, the felony murder rule says that one committing a felony may be guilty of murder if someone, including the felony victim, a bystander or a co-felon, dies as a result of his acts, regardless his intent—or lack thereof—to kill.

While most homicides by civilians are criminally prosecutable, a right of self-defense (often including the right to defend others)[3] is widely recognized, including, in dire circumstances, the use of deadly force.[4]

Homicides may also be non-criminal when conducted with the sanction of the state. The most obvious examples are capital punishment, in which the state punishes a criminal with death. Homicides committed in action during war are usually not subject to criminal prosecution either. In addition, members of law enforcement entities are also allowed to commit justified homicides within certain parameters which, when met, do not usually result in prosecution; see deadly force.

A 2011 study by the United Nations Office on Drugs and Crime brought together a wide variety of data sources to create a worldwide picture of trends and developments.[5] Sources included multiple agencies and field offices of the United Nations, the World Health Organization, and national and international sources from 207 countries.

UNODC, in its 2013 global report, estimated the total number of homicides worldwide dropped to 437,000 in 2012. Americas accounted for 36% of all homicides globally, Africa 31%, Asia 28%, Europe 5% and Oceania 0.3%.[7] The world's average homicide rate stood at 6.2 per 100,000 population in 2012, but Southern Africa region and Central America have intentional homicide rates four times higher than the world average. They are the most violent regions globally, outside of regions experiencing wars and religious or sociopolitical terrorism.[7] Asia exclusive of West Asia and Central Asia, Western Europe, Northern Europe, as well as Oceania had the lowest homicide rates in the world. About 41% of the homicides worldwide occurred in 2012 with the use of guns, 24% with sharp objects such as knife, and 35% by other means such as poison. The global conviction rate for the crime of intentional homicide in 2012 was 43%.[8]

[W]here homicide rates are high and firearms and organized crime in the form of drug trafficking play a substantial role, 1 in 50 men aged 20 will be murdered before they reach the age of 31. At the other, the probability of such an occurrence is up to 400 times lower.

[H]omicide is much more common in countries with low levels of human development, high levels of income inequality and weak rule of law than in more equitable societies, where socio-economic stability seems to be something of an antidote to homicide.

Women murdered by their past or present male partner make up the vast majority of [female] victims.[5] 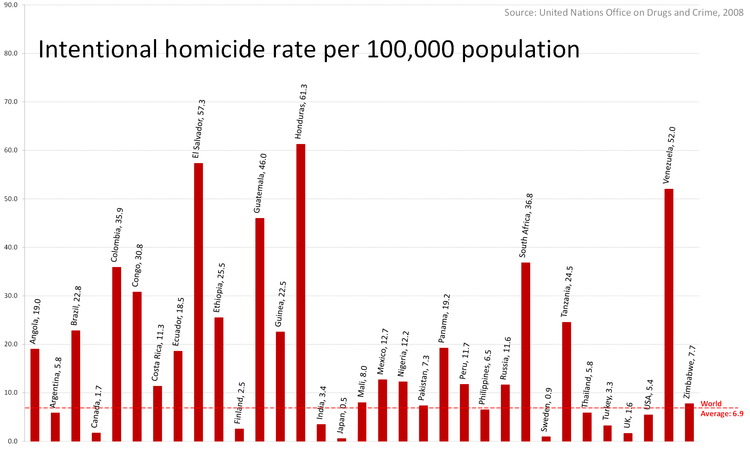 A comparison of homicide rates, per 100,000 people, for some countries. Terror and war-related deaths are not included. Chinese homicide data is unavailable.