From Infogalactic: the planetary knowledge core
(Redirected from Homophonous)
Jump to: navigation, search
This article is about the term in linguistics. For other uses, see Homophony (disambiguation).
Not to be confused with Homophobe. 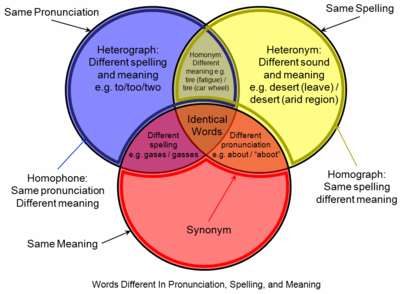 A homophone is a word that is pronounced the same as another word but differs in meaning, and may differ in spelling. The words may be spelled the same, such as rose (flower) and rose (past tense of "rise"), or differently, such as carat, caret, and carrot, or to, two, and too. Homophones that are spelled the same are also both homographs and homonyms.[1] Homophones that are spelled differently are also called heterographs. The term "homophone" may also apply to units longer or shorter than words, such as phrases, letters or groups of letters that are pronounced the same as another phrase, letter or group of letters.

A word or unit with this property is said to be "homophonous". "Homophone" derives from the Greek homo-  (ὁμο‑), "same", and phōnḗ (φωνή), "voice, utterance".

In wordplay and games 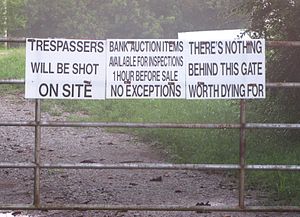 A sign reads "Trespassers will be shot on site [sic]":
"Site" is a homophone of "sight"

Homophones are often used to create puns and to deceive the reader (as in crossword puzzles) or to suggest multiple meanings. The last usage is common in poetry and creative literature. An example of this is seen in Dylan Thomas's radio play Under Milk Wood: "The shops in mourning" where mourning can be heard as mourning or morning. Another vivid example is Thomas Hood's use of "birth" and "berth" and "told" and "toll'd" (tolled) in his poem "Faithless Sally Brown":

His death, which happen'd in his berth,
At forty-odd befell:
They went and told the sexton, and
The sexton toll'd the bell.

In some accents, various sounds have merged in that they are no longer distinctive, and thus words that differ only by those sounds in an accent that maintains the distinction (a minimal pair) are homophonous in the accent with the merger. Some examples from English are:

Wordplay is particularly common in English because the multiplicity of linguistic influences offers considerable complication in spelling and meaning and pronunciation compared with other languages.

Homophones of multiple words or phrases (as sometimes seen in word games) are also known as "oronyms". This term was coined by Gyles Brandreth and first published in his book The Joy of Lex (1980), and it was used in the BBC programme Never Mind the Full Stops, which also featured Brandreth as a guest.

Examples of "oronyms" (which may only be true homophones in certain dialects of English) include:

Initiate: "My wife ate two sandwiches, initiate [and then she ate] a bag o' tater chips."
Mayonnaise: "Mayonnaise [Man, there is] a lot of people here tonight."
Innuendo: "Hey dude I saw a bird fly innuendo [in your window]."
Moustache: "I Moustache [must ask] you a question."

There are sites, for example, http://people.sc.fsu.edu/~jburkardt/fun/wordplay/multinyms.html, which have lists of homonyms or rather homophones and even 'multinyms' which have as many as seven spellings. There are differences in such lists due to dialect pronunciations and usage of old words. In English, there are approximately 88 triples; 24 quadruples; 2 quintuples; 1 sextet and 1 septet. The septet is:

Other than the three common words (raise, rays and raze), there are:

If proper names are allowed then a nonet is Ayr (Scottish town), Aire (Yorkshire River), Eyre (legal term and various geographic locations), heir, air, err (some speakers), ere (poetic "before"), e'er (poetic "ever", some speakers), are (unit of area; some speakers).

There are a large number of homophones in Japanese, due to the use of Sino-Japanese vocabulary, where borrowed words and morphemes from Chinese are widely used in Japanese, but many sound differences, such as tones, are lost. These are to some extent disambiguated via Japanese pitch accent, or from context, but many of these words are primarily or almost exclusively used in writing, where they are easily distinguished as they are written with different kanji; others are used for puns, which are frequent in Japanese. An extreme example is kikō, which is the pronunciation of at least 22 words (some quite rare or specialized, others common; all these examples are two-character compounds), including: 機構, 紀行, 稀覯, 騎行, 貴校, 奇功, 貴公, 起稿, 奇行, 機巧, 寄港, 帰校, 気功, 寄稿, 機甲, 帰航, 奇効, 季候, 気孔, 起工, 気候, 帰港.

The Korean language contains a combination of words that strictly belong to Korean and words that are loanwords from Chinese. Due to Chinese being pronounced with varying tones and Korean's removal of those tones, and because the modern Korean writing system, Hangeul, has a more finite number of phonemes than, for example, Latin-derived alphabets such as English's, there is a large number of homonyms with both same spelling and pronunciation. For example, '화장하다': 'to put on makeup' and '화장하다': 'to cremate'. Also, '유산': 'inheritance' and '유산': 'miscarriage'. '방구': 'fart', and '방구': 'guard'. There are heterographs, but far fewer, contrary to the tendency in English. For example, '학문': 'learning', and '항문': 'anus'. Using hanja (한자), which are Chinese characters, such words are written differently.

Implicit above, like in other languages, Korean homonyms can be used to make puns. The context in which the word is used indicates which meaning is intended by the speaker or writer.

Use in psychological research

Pseudo-homophones are pseudowords that are phonetically identical to a word. For example, groan/grone and crane/crain are pseudo-homophone pairs, whereas plane/plain is a homophone pair since both letter strings are recognised words. Both types of pairs are used in lexical decision tasks to investigate word recognition.[2]

Use as ambiguous information

Homophones where one spelling is of a threatening nature and one is not (e.g. slay/sleigh, war/wore) have been used in studies of anxiety as a test of cognitive models that those with high anxiety tend to interpret ambiguous information in a threatening manner.[3]