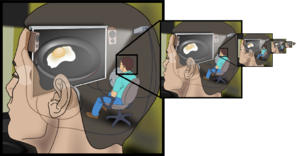 The homunculus argument is a fallacy arising most commonly in the theory of vision. One may explain (human) vision by noting that light from the outside world forms an image on the retinas in the eyes and something (or someone) in the brain looks at these images as if they are images on a movie screen (this theory of vision is sometimes termed the theory of the Cartesian Theater: it is most associated, nowadays, with the psychologist David Marr). The question arises as to the nature of this internal viewer. The assumption here is that there is a 'little man' or 'homunculus' inside the brain 'looking at' the movie.

Another example is with cognitivist theories that argue that the human brain uses 'rules' to carry out operations (these rules often conceptualised as being like the algorithms of a computer program). For example, in his work of the '50s, '60s and '70s Noam Chomsky argued that (in the words of one of his books) human beings use Rules and Representations (or to be more specific, rules acting on representations) in order to cognate (more recently Chomsky has abandoned this view: c.f. the Minimalist Program).

Now, in terms of (say) chess, the players are given 'rules' (i.e. the rules of chess) to follow. So: who uses these rules? The answer is self-evident: the players of the game (of chess) use the rules: it's not the case (obviously) that the rules themselves play chess. The rules themselves are merely inert marks on paper until a human being reads, understands and uses them. But what about the 'rules' that are, allegedly, inside our head (brain)? Who reads, understands and uses them? Again, the implicit answer is (and, some would argue, must be) a 'homunculus': a little man who reads the rules of the world and then gives orders to the body to act on them. But again we are in a situation of infinite regress, because this implies that the homunculus has cognitive process that are also rule bound, which presupposes another homunculus inside its head, and so on and so forth. Therefore, so the argument goes, theories of mind that imply or state explicitly that cognition is rule bound cannot be correct unless some way is found to 'ground' the regress.

This is important because it is often assumed in cognitive science that rules and algorithms are essentially the same: in other words, the theory that cognition is rule bound is often believed to imply that thought (cognition) is essentially the manipulation of algorithms, and this is one of the key assumptions of some varieties of artificial intelligence.

The homunculus fallacy is closely related to Ryle's regress.

The above cited regress argument does not necessarily invalidate all forms of the homunculus argument. The regress relies on the idea that the homunculus 'inside' the brain must itself have a homunculus inside it but it is not clear that this is a necessary condition. A dualist might argue that the homunculus inside the brain is an immaterial one (such as the Cartesian soul), or a mystic might assert that the homunculus is a recharacterization of the infinite consciousness of God (or true self), and thereby does not require a homunculus (or any form, spiritual or material) to have sensory experience, since such experience is a self-aware expression of the universe requiring no end to the regress other than the present moment itself. A non-dualist may assert, similarly to the mystic, that a human life form (or any organism) is coterminous and indivisible from its environment, with this unified field of awareness (i.e., universal consciousness) mistaking itself for a homunculus (or an ego). Thus, the regress argument is only valid if there can be no other explanation of the homunculus's cognition supplied, and the arguments of a First Cause or a transcendental, formless consciousness (i.e., awareness underlying and beyond form) are rejected.[citation needed]