From Infogalactic: the planetary knowledge core
Jump to: navigation, search
This article is about organizations. For the band, see Honor Society (band). For honor-based cultures, see honor culture. 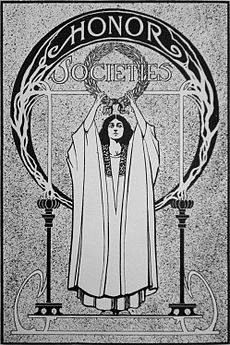 "Honor Societies", illustration from the 1909 Tyee (yearbook of the University of Washington)

In the United States, an honor society is a rank organization that recognizes excellence among peers. Numerous societies recognize various fields and circumstances. The Order of the Arrow, for example, is the national honor society of the Boy Scouts of America. Chiefly, the term refers to scholastic honor societies, those that recognize students who excel academically or as leaders among their peers, often within a specific academic discipline.

Many honor societies invite students to become members based on the scholastic rank (the top x% of a class) and/or grade point averages of those students, either overall, or for classes taken within the discipline for which the honor society provides recognition. In cases where academic achievement would not be an appropriate criterion for membership, other standards are usually required for membership (such as completion of a particular ceremony or training program). It is also common for a scholastic honor society to add a criterion relating to the character of the student. Some honor societies are invitation only while others allow unsolicited applications. Finally, membership in an honor society might be considered exclusive, i.e., a member of such an organization cannot join other honor societies representing the same field. 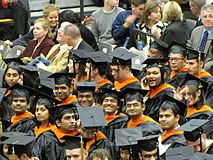 Academic robes and regalia identifying by color the degree, school and other distinction, are controlled under rules of a voluntary Intercollegiate Code. In addition, various colored devices such as stoles, scarfs, cords, tassels, and medallions are used to indicate membership in a student's honor society. Of these, cords and mortarboard tassels are most often used to indicate membership. Most institutions allow honor cords, tassels and/or medallions for honor society members. Stoles are less common, but they are available for a few honor societies. Virtually all, if not all honor societies have chosen such colors, and may sell these items of accessory regalia as a service or fundraiser.[1]

Many fraternities and sororities are referred to by their membership or by non-members as honor societies, and vice versa, though this is not always the case. Honor societies exist at the high school, collegiate/university, and postgraduate levels, although university honor societies are by far the most prevalent. In America, the oldest academic society, Phi Beta Kappa, was founded as a social and literary fraternity in 1776 at the College of William and Mary and later organized as an honor society in 1898, following the establishment of the honor societies Tau Beta Pi for Engineering (1885), Sigma Xi for Scientific Research (1886), and Phi Kappa Phi for all disciplines (1897).[2]

Important national and international honor societies based in or at schools include the following:

Some universities have their own independent, open honor societies, which are not affiliated with any national or international organization. Such organizations typically recognize students who have succeeded academically irrespective of their field of study. These include: