From Infogalactic: the planetary knowledge core
Jump to: navigation, search
For other uses, see Hoorn (disambiguation). 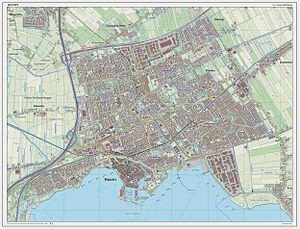 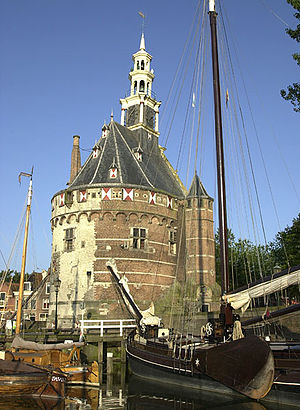 The Hoofdtoren (The Head Tower), viewed from the waterfront 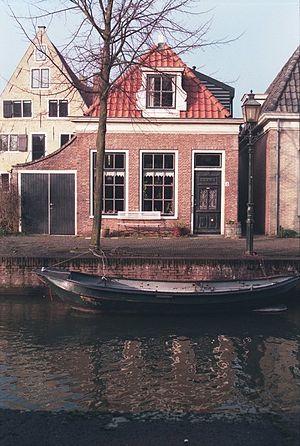 This is in the old city centre, where the port used to be. Most of the old port disappeared with the building of the Afsluitdijk

listen) is a municipality and a town in the Netherlands, in the province of North Holland. It is located on the IJsselmeer, 35 kilometres north of Amsterdam, and acquired city rights in 1357. Hoorn had a population of 71,888 in 2014. The area of the municipality is 53.25 km2 (20.56 sq mi) of which 33.00 km2 (12.74 sq mi) consists of water, mainly the Markermeer. The municipality consists of the following villages and/or districts: Blokker, Hoorn, Zwaag, and parts of Bangert and De Hulk.

Cape Horn, the most southerly point of the Americas, was named after the town by Willem Schouten, who rounded it in 1616. The Hoorn Islands of the Oceanian nation of Wallis and Futuna are also named after this city.

The origin of the name Hoorn, even in old spelling Hoern(e) or Hoirne, is surrounded in myths. Hoorn's name, according to Old Frisian legends, is derived from the stepson of King Redbad (Radboud), called Hornus. Another story about the origin of the name is that it is derived from a sign depicting a post horn in an early 14th-century hanging outside one of the establishments situated on the Roode Steen Square. A third version says that the name was derived from the horn shape of one of its first ports. The author of the 'Origo Civitatis Hornensis' (see page. 256, 'Uit de schemer van Hoorns verleden') assumes that name Hoorn was derived from Damphoorn. Damphoorn is the medieval name for a weed that could be made into whistles, which grew in abundance in the area outside the dykes of Hoorn. Chronicler Velius rejects this statement because there are no old historical entries that Hoorn was called Damphoorn. He wrote: The name was from the start Hoorn: not (against better judgement) derived from the weed Damphoorn, as the current sentiment holds (De name was van eersten af Hoorn: niet (behoudens beter oordeel) van het kruyt Damphoorn, als t'ghemeyne ghevoelen van noch heden hout). Velius also rejects the assertion that the name's origin is Dampter Horn: a neighbourhood of the village Dampten, which flooded and had fallen into disuse.

The name is most probably derived from Hornicwed, a name that is popping up in early mediaeval documents. The medieval meaning of hornic is 'corner', with wed or wedor being the medieval word for water. Many places and neighbourhoods in the Netherlands are called, even today; Heurne, Huurne and Horn. Hornicwed would therefore refer to the location of a corner on the coastline: the location of Hoorn at the Zuiderzee. We see hornic in the meaning of 'corner' also reflected in another municipality in the mediaeval County of Holland: Uithoorn, meaning uithoek, which refers to a certain occupied area (or corner) at some distance.

It is also sometimes argued that hornic refers to a corner in a dike, but this raises doubts: the coast of the Zuiderzee was originally farther away from Hoorn compared to the present day: the Westfriese Omringdijk ran, originating from the West, in a straight line to Schardam and in front of this dyke there were then low-lying tracts of land, where the village of Dampten was located according to Velius. This area was abandoned and flooded after 1391, following the abandonment of the old dyke. A new dyke was built farther inland, resulting in a bay which is now the Hoornse Hop. Hoorn was already in existence then.

Founded in 716, Hoorn rapidly grew to become a major harbour town. During Holland's 'Golden Age' (or 'Golden Century'), Hoorn was an important home base for the Dutch East India Company (VOC) and a very prosperous centre of trade. The Hoorn fleet plied the seven seas and returned laden with precious commodities. Exotic spices such as pepper, nutmeg, cloves, and mace were sold at vast profits. With their skill in trade and seafaring, sons of Hoorn established the town's name far and wide. Jan Pieterszoon Coen (1587–1629) is famous for his violent raids in Dutch Indies (now Indonesia), where he "founded" the city of Batavia in 1619 (now Jakarta). He has a big statue on the Rode Steen square in the center of Hoorn.

In 1618 Willem Bontekoe (1587–1657) undertook his first and only voyage for the VOC. His story of his travel and hardship found its way into the history books when he published his adventures in 1646 under the title Journael ofte gedenckwaerdige beschrijvinge van de Oost-Indische reyse van Willem Ysbrantsz. Bontekoe van Hoorn, begrijpende veel wonderlijcke en gevaerlijcke saecken hem daer in wedervaren ('Journal, or memorable description, of the East-Indian voyage of Willem Ysbrantz. Bontekoe of Hoorn, comprising many wondrous and dangerous things experienced by him'). In 1616, the explorer Willem Corneliszoon Schouten braved furious storms as he rounded the southernmost tip of South America. He named it Kaap Hoorn (Cape Horn) in honour of his home town.

Hoorn's fortunes declined somewhat in the eighteenth century. The prosperous trading port became little more than a sleepy fishing village on the Zuiderzee. Following the Napoleonic occupation, there was a period during which the town gradually turned its back on the sea. It developed to become the market for the entire West Frisian agricultural region. Stallholders and shopkeepers devoted themselves to trading in dairy produce and seeds. When the railway and metalled roads came to Hoorn in the late nineteenth century, the town rapidly took its rightful place as a conveniently located and readily accessible centre in the network of towns and villages which make up the province of Noord-Holland. In 1932, the Afsluitdijk, or Great Enclosing Dyke, was completed, and Hoorn was no longer a seaport.

The years after the Second World War saw a period of renewed growth. At the centre of a flourishing horticultural region, Hoorn developed an extremely varied economy. During the 1960s, Hoorn was designated an 'overflow' city to relieve pressure on the overcrowded Randstad region. Thousands of people swapped their cramped little apartments in Amsterdam for a family house with garden in one of Hoorn's modern new developments. 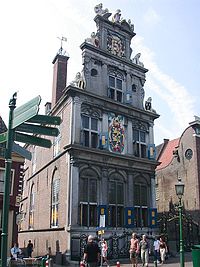 The municipal council of Hoorn consists of 35 seats, which are divided as follows:

Hoorn is connected to the Dutch railway network, and has two stations: Hoorn and Hoorn Kersenboogerd. Also, it is the starting point of the historical railway between Hoorn and Medemblik.

The City of Hoorn has a twin city status with: