Hope College is a private, residential liberal arts college in downtown Holland, Michigan, United States, a few miles from Lake Michigan. It opened in 1851 as the Pioneer School by Dutch immigrants four years after the community was first settled. The first freshman college class matriculated in 1862 and Hope received its state charter in 1866. Hope College is affiliated with the Reformed Church in America and it retains a vibrant Christian atmosphere. The school's 125 acres (0.195 sq mi) campus is adjacent to the downtown commercial district and has been shared with Western Theological Seminary since 1884. The school's enrollment is just over 3,400 undergraduates.

Hope's motto is taken from Psalm 42:5: "Spera in Deo" ("Hope in God"). The college's emblem is an anchor. This is drawn from a speech made by Albertus van Raalte, the leader of the community, on the occasion of the founding of the Pioneer School in 1851: "This is my anchor of hope for this people in the future," (an allusion to Hebrews 6:19). The primary-level Pioneer School was later expanded to secondary, and soon after, college level education as Hope College. Van Vleck Hall, which originally housed the Pioneer School, is the oldest building on campus (1858) and now serves as a dormitory. It is the second oldest building in the city. The first freshman college class matriculated in 1862, and Hope received its state charter in 1866. The college admitted its first female students in 1878.

2015 marks Hope College's 150th year of education. In honor of this celebration, Hope College held many events throughout 2015. The celebration began with the 150th commencement on May 3, 2015. The year held two grand openings, the Kruizenga Art Museum and the Jack H. Miller Center for Musical Arts, and the groundbreaking ceremony of the Jim and Martie Bultman Student Center. The College also sponsored the Presidential Colloquium lecture series which featured an address by David Brooks on Christian education in the 21st century.[3]

Hope maintains strong ties to the Reformed Church of America and seeks to educate students within the historic Christian faith while maintaining a rigorous academic education.

In addition, Hope College is a member of the Great Lakes Colleges Association.

Courses offered at Hope are divided into five disciplines.

While taking courses in General Education[4] at Hope, students will encounter a diverse array of topics rooted in the liberal arts education. Regardless of his or her major, students will take courses in the areas of art, history, language, literature, math and sciences In addition to these courses, students will also participate in a First-Year Seminar course during their freshman year and a Senior Seminar course in their senior year of college. These courses were developed to help transition students in and out of their college career.

The Fine and Performing Arts[5] degree at Hope College consists of four departments, which include Art and Art History, Dance, Music and Theatre. The Humanities division includes the departments of English, History, Modern and Classical Language, Philosophy and Religion. The Arts division at Hope College seeks to “educate every student and the community in the transformational power of the arts.” Hope College was the first private, liberal arts college to hold national accreditation in art, dance, music and theatre.

The Natural and Applied Sciences[6] programs at Hope College include Biology, Biochemistry and Molecular Biology, Chemistry, Computer Science, Engineering, Geological and Environmental Sciences, Mathematics, Neuroscience, Nursing and Physics. Many of these departments offer research positions for students in the summer and also provide summer camps for elementary to high school students to attend.

Hope College is accredited[9] by the Higher Learning Commission of the North Central Association, with professional accreditation from the following:

On-campus housing[13] is provided in 11 residence halls, 15 apartment buildings, and 70+ houses (called "cottages") that the college owns near the campus. A small percentage of students - primarily juniors, seniors, and Holland residents - live off-campus. All full-time students without commuter status are required to live in on-campus housing for three years.

File:Hopesailing.jpg
The Hope Sailing club is one of the many clubs that Hope offers.

Student activities[14] and organizations include Dance Marathon and Relay for Life, an FM radio station (WTHS-FM 89.9), newspaper (The Anchor), literary magazine (Opus), and yearbook (Milestone), plus a variety of academic, musical, spiritual, literary, social and athletic clubs in which students may choose to participate. About 10-12% of students belong to social fraternities and sororities, which are local to Hope rather than chapters of larger organizations, with the exception of one fraternity and one sorority (Phi Sigma Kappa and Delta Sigma Theta respectively). The college holds Sunday evening worship services ("The Gathering") and Monday/Wednesday/Friday Chapel services on campus. Attendance at these events has been voluntary since 1970, yet students routinely fill Dimnent Memorial Chapel to its capacity of greater than 1,000 students at each service.

"The Pull" is an annual tug-of-war between the freshman and sophomore classes at Hope College. The Pull takes place across the Black River in Holland, Michigan, and now takes place on the last Saturday of September every year ( Prior to 1993 it was held on a Friday). The Pull dates back to 1898. During the Pull, each team has 18 students on the rope as "pullers," and another 18 acting as guides and morale boosters, or "moralers." The freshmen are coached by the junior class, and the sophomores by the seniors. This arrangement has led to the rivalry between even and odd year classes. Even year's colors are red and white, while Odd year's colors are maroon and gold. The competition is now limited to three hours; however, it previously had no time limit. The winner is decided by a measure of which team has taken the most rope.

File:Hopecollegepull.jpg
A view of the Odd year side at the 114th pull

The Nykerk Cup is a multi-faceted competition between freshmen and sophomore women that involves song, play, and oration. In the same way as the Pull, the freshman are coached by the juniors and the sophomores by the seniors, also contributing to the “Odd Year” and “Even Year” competition. The Nykerk Cup takes place during Family Weekend in late fall. The tradition began in 1935 by John Nykerk. [15]

One formal dance is offered by the college in February. Students may attend in large groups or with dates, and the college offers transportation to Grand Rapids, where the dance takes place.

The students of Hope College annually hold Dance Marathon to raise money for the Helen Devos Children's Hospital in Grand Rapids. This event takes place every spring semester and students volunteer to be dancers or moral for the event. Dancers stand on their feet and dance for 24 hours while moral take shifts to support the dancers throughout the day and night. Routinely children of the hospital make a visit to show their thanks and support the dancers.

Hope routinely hosts well-known authors, speakers, scientists, and global leaders on-campus to present lectures on a wide variety of topics. In addition, The Jack Ridl Visiting Writers Series brings in prominent authors for free public readings. The Series is named in honor of poet and Hope College professor emeritus Jack Ridl, who founded the tradition in 1982.

For eight straight years (2006–2013), Hope College has been listed among the "101 best and brightest companies to work for in West Michigan" survey of the Michigan Business and Professional Association.[10]

The college marked completion of the`Greater Hope[16]` campaign in Oct. 2015 with the dedication of the Jack H. Miller Center for Musical Arts. In Sept. 2015, the college dedicated the opening of Kruizenga Art Museum, designed by C Concept Design, and broke ground on construction of the John and Martie Bultman Student Center.

As of October 2015, the Jack H. Miller Center for Musical Arts and the Kruizenga Art Museum are currently open and in use by students and faculty. The John and Martie Bultman Student Center has broken ground in the middle of campus and is estimated to be opened for the 2017-2018 school year.

Hope College competes in the MIAA conference, and is a Division III member of the NCAA. It currently fields 20 men's and women's varsity teams. The college has constructed several new outdoor athletic venues in recent years— DeVos Fieldhouse (2005), Boeve Baseball Stadium (2008), Wolters Softball Stadium (2008), Van Andel Soccer Stadium (2009) and Heeringa-Vande Poel Tennis Stadium (2012). The college recently acquired Holland Municipal Stadium from the City of Holland and has renamed it the Ray and Sue Smith in honor of a longtime coach and his wife. In 2006, the women's basketball team won the National Championship in its division, the second in school history.

Hope has won the MIAA All-Sports/Commissioner's Cup Championship more than any other member school. Hope has won the honor a league-leading 34 times.[17] In 2012-13 Hope athletes and/or teams qualified for nine NCAA championships.

The school's athletic teams are called the Flying Dutchmen[2] (men) and the Flying Dutch (women).[2] The school colors are blue and orange (possibly chosen because the Dutch royal family is the House of Orange-Nassau). The college sponsors club ice hockey and rugby in addition to a popular intramural sports program.

File:HopeDeVosFieldhouse2.jpg
DeVos Fieldhouse on the campus of Hope College

The men's and women's basketball teams also take part in a notable rivalry, the Calvin–Hope rivalry.

The following people have presided over the college:[18] 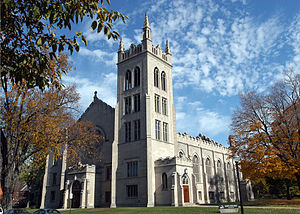 * attended but did not graduate from Hope