Horoi (Greek: Ὅροι, Latin: Definitiones) is the title of an ancient collection of definitions that was sometimes ascribed to Plato in antiquity and was sometimes included in the Platonic corpus, but certainly was not written by Plato (as some ancient authors recognized). The collection is thus also known as the Pseudo-Platonic Definitions. It is included, along with other material of doubtful authenticity, in Burnet's Oxford Classical Text edition of Plato's works.

In modern scholarship, the Horoi is thought to have little philosophical value. Given the sophistication of Plato's and Aristotle's efforts in the area of definition, this collection seems to be an elementary text produced by second-rate, philosophical study. Its early date, however, does give it some importance as a source for the history of ancient Platonism.[1]

The Horoi is a list of 184 terms important in early Platonism together with one or more brief definitions. Though not in alphabetical or any other simple order, it is possible to discern some features of the organization of the collection. Definitions 1-20 consist chiefly of terms from natural philosophy. Definitions 21-107, the main section of the collection, contain concepts from ethics (affects and virtues), political theory, logic, grammar, and epistemology. Definitions 108-184 are a final appendix that contains a mixture of concepts which sometimes duplicate earlier terms and therefore was probably added at a later date. There are few terms drawn from metaphysics. It is probable that the collection underwent changes through the centuries since the number of definitions in the surviving manuscripts varies.[2]

Methodologically, the Horoi is related to the Platonic Method of Division (diairesis) that progresses from the more general to the more specific, i.e., from 'above' to 'below.' Definitions were constructed by first giving the genus of the thing to be defined and then giving more and more of its special characteristics (its differentia) until it was fully distinguished from other members of the genus. Such a definition therefore gives the lowest species for the thing defined. In the Horoi, for example, the word definition is defined as an expression that is composed of genus and differentia.[3] Many definitions in the Horoi follow these principles and define terms by giving their genus and distinguishing characteristics. A human, for example, is a two-footed animal without wings.[4] Here, two-footed animal is the lowest genus that contains humans and without wings distinguishes humans from all the other two-footed animals, i.e., from birds. Other definitions, however, consist only of lists of characteristics or are trivial explanations of words. Many concepts are defined simply by giving the distinguishing characteristic. Humans, for example, are also defined as the only rational animal.

Author and Time of Composition

There is a scholarly consensus that the Horoi cannot be ascribed to Plato. However, many individual points rest on his doctrines and it is probable that the way of defining various concepts goes back to this teaching. It is thought certain that the Horoi originated in the circles around the school of philosophy founded by Plato, i.e., in or around the Academy. The definitions were probably collected at the time of the Early Academy, and indeed in the period immediately following Plato's death, that is, in the second half of the fourth century or the first third of the third century BCE. Key Aristotelian terms such as 'potential' and 'actuality' are not conspicuous in the Horoi.

The existence of the Horoi is first attested in the Roman imperial period. Until late antiquity, no one else but Plato was named as the author,[8] but the prevailing opinion was that the collection did not originate with him. It was not included in the tetralogical arrangement of Plato's works. The anonymous Prolegomena to Platonic Philosophy, which is dated to late antiquity, designates Speusippus as the author.[9]

The earliest, surviving manuscript is from the ninth century CE.[10]

The Horoi was unknown to the Latin-speaking, scholarly world of the Middle Ages and was first rediscovered by Renaissance humanists. In the fifteenth century, the humanist Marsilio Ficino believed the collection's author was Speusippus.[11]

Ficino translated the Horoi into Latin and published his translation in Venice in 1497 with Aldus Manutius, and named Speusippus as the author in the introduction.[12]

The first edition of the Greek text was brought out in Venice by Aldus Manutius in September 1513 as part of the complete works of Plato edited by Markos Musuros. This edition was the basis for the Latin translation that the humanist Willibald Pirckheimer brought out in Nuremberg in 1523 with the printer Friedrich Peypus.[13] 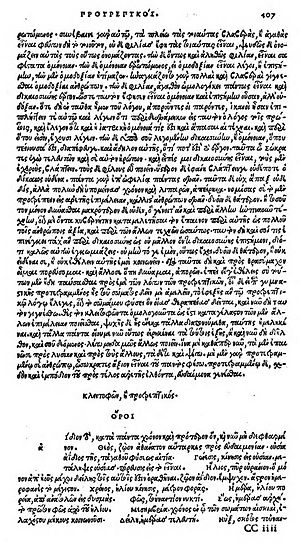 The first printed edition of the Horoi, Venice 1513, first page