Horology (via Latin horologium from Greek ὡρολόγιον, from ὥρα hṓra "hour; time" and -o- interfix and suffix -logy; lit. "the study of time")[1][2] is the art or science of measuring time. Clocks, watches, clockwork, sundials, hourglasses, clepsydras, timers, time recorders, marine chronometers, and atomic clocks are all examples of instruments used to measure time. In current usage, horology refers mainly to the study of mechanical time-keeping devices, while chronometry more broadly includes electronic devices that have largely supplanted mechanical clocks for the best accuracy and precision in time-keeping.

People interested in horology are called horologists. That term is used both by people who deal professionally with timekeeping apparatus (watchmakers, clockmakers), as well as aficionados and scholars of horology. Horology and horologists have numerous organizations, both professional associations and more scholarly societies. 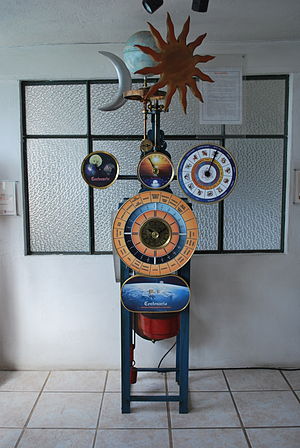 "Universal Clock" at the Clock Museum in Zacatlán, Puebla, Mexico

There are many horology museums and several specialized libraries devoted to the subject. One example is the Royal Greenwich Observatory, which is also the source of the Prime Meridian (longitude 0° 0' 0"), and the home of the first marine timekeepers accurate enough to determine longitude (made by John Harrison). Other horological museums in the London area include the Clockmakers' Museum, which will re-open at the Science Museum in October 2015, and the horological collections at the British Museum, the Science Museum (London) and at the Wallace Collection.

One of the more comprehensive museums dedicated to horology is the Musée international d'horlogerie in La Chaux-de-Fonds (Switzerland). The Musée d'Horlogerie du Locle is smaller but located nearby. One of the better horological museums in Germany is the Deutsches Uhrenmuseum in Furtwangen im Schwarzwald, in the Black Forest. The two leading specialised horological museums in North America are the National Watch and Clock Museum in Columbia, Pennsylvania, and the American Clock and Watch Museum in Bristol, Connecticut.

In France, the Musée du Temps de Besançon is located in the historic Palais Grenvelle in Besançon in the east of the country.

An example of a museum devoted to one particular type of clock is the Cuckooland Museum in the U.K., which hosts the world's largest collection of antique cuckoo clocks.

Another museum dedicated to clocks is the Willard House and Clock Museum in Grafton, Massachusetts.