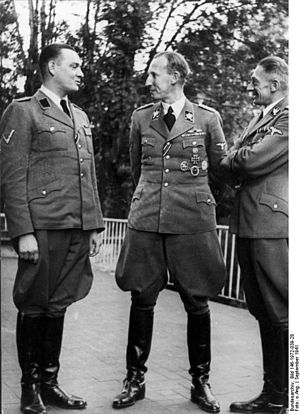 Horst Böhme (left), together with Reinhard Heydrich (center) and Karl Hermann Frank (right)[1]
This article is about the SS officer. For the German chemist, see Horst Böhme (chemist).

Horst Böhme (24 August 1909 in Colmnitz, Klingenberg, Saxony – 10 April 1945[2] in Königsberg) was a German SS-Oberführer and a leading perpetrator of the Holocaust.

Böhme attended Volksschule and worked as a freight forwarder. He was politically involved in the Jungstahlhelm, the Marinebrigade Ehrhardt and the Freikorps Oberland.[3] Böhme joined the NSDAP in 1930 (Nazi Party membership number 236,651). At the same time, he became a member of the SS (membership number 2,821). After promotion to SS-Untersturmführer (4 July 1934) and SS-Obersturmführer (9 November 1934),[4] he worked in the Sicherheitsdienst or SD (Security Service) office in Berlin from 1935, where he soon became a close associate of SD chief Reinhard Heydrich.

In the ensuing years, Böhme mainly took his orders from Heydrich. On 13 or 14 March 1938, on Heydrich's orders, Böhme murdered Wilhelm Freiherr von Ketteler by drowning. Ketteler was an attaché at the German embassy in Vienna, who was hated by the SS because of his anti-Nazi activities.[5] In step with the growth of the SS, Böhme also continued to rise in the organization. On 30 January 1936, he was promoted to SS-Hauptsturmführer, then appointed SS-Sturmbannführer on 20 April 1937, and in 1938 became SS-Obersturmbannführer und Oberstleutnant der Polizei.

As part of Sonderaktion Prag on 17 November 1939, Böhme was instrumental in the closure of Czech institutions of higher learning, and the deportation of 1,500 students to Sachsenhausen concentration camp. On 10 October 1940, Böhme, along with Heydrich, Hans Frank, Adolf Eichmann and Hans Günther, took part in the meeting to determine the deportation of Jews in the Protectorate – some 88,000 people.

After the assassination of Reinhard Heydrich in May 1942, Böhme – since 21 October 1941 with the rank of SS-Standartenführer – immediately acted on the "retaliation" orders from Adolf Hitler by perpetrating the massacre at Lidice.[6] When Böhme thought the executions were proceeding too slowly with the men being shot in groups of five, he ordered that ten men be shot at a time.[7] In total, 184 men were killed, 195 women were deported to Ravensbrück concentration camp, and 88 children were deported to resettlement camps in Łódź. The children's arrival was announced by a telegram from Böhme's Prague office which ended with: the children are only bringing what they wear. No special care is desirable.[citation needed] The care was minimal. They suffered from a lack of hygiene and from illnesses. By order of the camp management, no medical care was given to the children. Shortly after their arrival in Łódź, officials from the Central Race and Settlement branch chose seven children for Germanisation.[8] The few children considered racially suitable for Germanisation were handed over to SS families.[9] Only 17 children ever returned to Lidice.

In September 1942, Böhme was a police attaché to Bucharest. From January to August 1943, he led the Einsatzgruppe B, which perpetrated the mass murder of civilians in the Soviet Union. From September 1943 to March 1944, Böhme worked in the same capacity for Einsatzgruppe C before returning to Einsatzgruppe B in August 1944 (now a police colonel). On 9 November 1944, he was made an SS-Oberführer.

In the last phase of the war he was Commander of the Security Police and the SD (Befehlshaber der Sicherheitspolizei und des SD (BdS)) in East Prussia. Since April 1945, Böhme, who was last seen in combat near Königsberg, was considered lost. After the war, he was listed as a war criminal on the international wanted list for some years. He was declared dead by the District Court of Kiel on 12 August 1954, with a death date of 10 April 1945. It was presumed that he had either died in combat or shot himself so as not to fall into Russian hands.[10]

Among the awards Böhme received during his career were the SS-Totenkopfring, the SS-Ehrendegen, the Iron Cross, 2nd Class and the War Merit Cross with Swords.