From Infogalactic: the planetary knowledge core
(Redirected from House of Representatives of the Netherlands)
Jump to: navigation, search

listen), or simply: Tweede Kamer, literally, Second Chamber) is the lower house of the bicameral parliament of the Netherlands, the States General, the other one being the Senate. It has 150 seats which are filled through elections using a party-list proportional representation. It sits in the Binnenhof in The Hague.

Although this body is called the "House of Representatives" in English, this is not a direct translation of its Dutch name, the "Second Chamber" or more colloquially just the "Chamber". Rather than "representatives" (afgevaardigden), members of the House are referred to as Tweede Kamerlid ("member of the Second Chamber").

The House of Representatives is also responsible for the first round of selection for judges to the Supreme Court of the Netherlands. It submits a list of three names for every vacant position to the Government. Furthermore, it elects the Dutch Ombudsman and his subsidiaries.

Parties wanting to take part must register 43 days before the elections, supplying a nationwide list of at most 50 candidates (80 if the party already has more than 15 seats). Parties that do not have any sitting candidates in the House of Representatives must also pay a deposit (11,250 euro for the November 2006 elections, for all districts together) and provide 30 signatures of support from residents of each of the 20 electoral districts in which they want to collect votes. The candidate lists are placed in the hands of the voters at least 14 days before the election. Two or more parties can agree to combine their separate lists (this is known as a 'list combination' or lijstencombinatie), which increases the chance of winning a remainder seat. Each candidate list is numbered, with the person in the first position known as the lijsttrekker ("list puller"). The lijsttrekker is usually appointed by the party to lead its election campaign. The lijsttrekker of the party receiving the most seats will often become the Prime Minister. Parties may choose to compete with different candidate lists in each of the 19 electoral districts, but as seats are allocated on national rather than district level, most parties have almost identical lists in all districts with candidates running nationwide. Only large parties usually have some regional candidates at the bottom of their lists.

Citizens of the Netherlands aged 18 or over have the right to vote; exceptions are: 1) prisoners serving a term of more than one year are excluded; 2) those who have been declared incapable by court because of insanity are also excluded. A single vote can be placed on any one candidate. Many voters select one of the lijsttrekkers (Jan Peter Balkenende, for example, received 2,198,114 of the CDA's 2,608,573 votes in the November 2006 elections), but alternatively a preference vote may be made for a candidate lower down the list.

Once the election results are known, the seats are allocated to the parties. The number of valid national votes cast is divided by 150, the number of seats available, to give a threshold for each seat (the kiesdeler). Each party's number of votes is divided by this threshold to give an initial number of seats. Any party that received fewer votes than the threshold (i.e., less than one in 150 of the total votes cast) fails to gain representation in the House of Representatives, thus the threshold is always at 0.67% of the total number of valid national votes (roughly one seat for every 50,000 votes). This is one of the lowest thresholds for national parliament elections in the world. In 1977, for instance, one party gained a seat despite winning only 0.77% of the vote. Any party that received more than 75% of the threshold will have its deposit refunded. 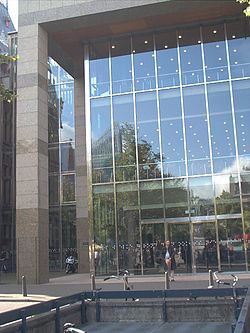 Exterior of the House of Representatives

Once the number of seats allocated to each party is known, in general they are allocated to candidates in the order that they appear on the party's list. (Hence, before the elections, the candidates near the top may be described as in an electable position, depending on the number of seats that the party is likely to obtain.) At this stage, however, the preference votes are also taken into account. Any candidate receiving more than one quarter of the threshold on personal preference votes (the 'preference threshold' or voorkeursdrempel, 0.1675% of the total number of valid votes), is considered elected in their own right, leapfrogging candidates higher on the list. In the November 2006 elections, only one candidate received a seat exclusively through preference votes, while 26 other candidates reaching the preference threshold were already elected based on their position on the list. If a candidate cannot take up the position in parliament (e.g., if they become a minister, decide not to enter parliament, or later resign) then the next candidate on the list takes their place.

After all seats are allocated a government is formed, usually based on a majority of the seats. Since 2012, the House of Representatives appoints an informateur (in previous years the informateur was appointed by the monarch), who checks out possible coalitions, and formateur, who leads formation negotiations. At the end of the negotiations, the formateur becomes prime minister. All cabinet members must resign from parliament, as the constitution does not allow a cabinet member to hold a seat in the House of Representatives.

Due to the nationwide party-list system and the low election threshold, it is nearly impossible for one party to win the 75 seats needed for a majority in the House of Representatives. Indeed, since the current party-list proportional representation system was introduced in 1918, no party has even approached the number of seats necessary for an outright majority. The highest proportion of seats was 54 out of 150, obtained by the CDA in 1986 and 1989. Between 1891 and 1897, the Liberal Union was the last party to have an absolute majority of seats in the House of Representatives. All Dutch governments since then have been coalitions of two or more parties.

The Dutch general election of 2012 was held on Wednesday, 12 September 2012, and followed the call for new elections after the fall of the First Rutte cabinet. The new Members of the House of Representatives where installed on 20 September 2012. The formation talks led to the installation of the Second Rutte cabinet, composed of the People's Party for Freedom and Democracy and the Labour Party on 5 November 2012.

List of Parliamentary leaders in the House of Representatives

List of Members of the Presidum of the House of Representatives

Members of the House of Representatives

Main article: Members of the House of Representatives of the Netherlands, 2012–present

Main article: Historic composition of the House of Representatives of the Netherlands
File:Dutchparlseats2.png
Representation per party 1946-2006

To give an overview of the history of the House of Representatives, the figure on the right shows the seat distribution in the House from the first general elections after WWII (1946) to the current situation. The left-wing parties are towards the bottom, the Christian parties in the centre, with the right-wing parties towards the top. Occasionally, single-issue (or narrow-focus) parties have arisen, and these are shown at the extreme top. Vertical lines indicate general elections. Although these are generally held every four years, the resulting coalition governments do not always finish their term without a government crisis, which is often followed by fresh elections. Hence the frequent periods shorter than four years.