Huave (also spelled Wabe) is a language isolate spoken by the indigenous Huave people on the Pacific coast of the Mexican state of Oaxaca. The language is spoken in four villages on the Isthmus of Tehuantepec, in the southeast of the state, by around 18,000 people (see table below). The Huave people of San Mateo del Mar – who call themselves Ikoots, meaning "us" – refer to their language as ombeayiiüts, meaning "our language". In San Francisco del Mar, the corresponding terms are Kunajts ("us") and umbeyajts ("our language"). The term "Huave" is thought to come from the Zapotec languages, meaning "people who rot in the humidity", according to the 17th-century Spanish historian Burgoa. However, Martínez Gracida (1888) claims the meaning of the term means 'many people' in Isthmus Zapotec, interpreting hua as "abundant" and be as a shortened form of binni ("people"). The etymology of the term will require further investigation. Neither of the above etymologies are judged plausible by Isthmus Zapotec speakers.

Although genetic relationships between the Huave language and several language families have been proposed, none have been substantiated and Huave continues to be considered an isolate (Campbell 1997 pg. 161). Paul Radin proposed a relationship between Huave and the Mayan and Mixe–Zoquean languages, and Morris Swadesh proposed a connection to the Oto-Manguean languages which has been further investigated by Rensch (1976), but all proposals have been inconclusive.

Current use and status

While Huave is still in use in most domains of social life in at least one of the four villages where it is spoken, it is an endangered language. Recently, fieldwork and revitalization projects have been carried out in the Huave communities by universities of different countries.

As of 2011, it is reported that teenagers have taken to texting in Huave, so as to be able to communicate without their parents' knowing what they are saying.[3] (Interestingly, the Mexican Kickapoo's whistled speech was developed around 1915 for much the same reason.)[4][5] Also as of 2011, a radio station in San Mateo del Mar, Radio Ikoots, was broadcasting in Huave.[6]

Huave of San Mateo del Mar is partly tonal, distinguishing between high and low tone in penultimate syllables only. Huave is one of only two Mesoamerican languages not to have a phonemic glottal stop (the other is Purépecha).

The phonemic inventory, reconstructed for the common ancestor of the four existing Huave varieties as presented in Campbell 1997, is as follows:

Huave is similar to the Mayan languages in being both morphologically and syntactically ergative and consistently head-marking.[7] It is less morphologically complex than Mayan languages, however, and usually each word has only a few affixes.[8] There are obligatory categories on the verb of absolutive person and present, past or future tense, plus additional categories of transitive subject, indefinite subject and reflexive.[8]

Complex sentences in Huave often juxtapose multiple verbs each inflected for the appropriate person. An interesting feature of Huave is that verbs meaning "give" can be used to produce causative meaning,[9] whilst a verb meaning "come" is used to produce purpose clauses (i.e. meaning "in order to" in English). There are other purpose clauses introduced by more ordinary particles in which the verb is inflected for a special subordinate mode.

Word order, like verb morphology, in Huave follows a fully ergative pattern. The basic word order can be expressed very simply as Ergative Verb Absolutive.[10] This means that whilst in transitive clauses the word order is AVO, in intransitive clauses the word order is verb–subject (VS). Adjectives and demonstratives can be placed either before or after the noun to which they refer, whilst numerals obligatorily precede their nouns.

Reduplication is a very productive phonological process in Huave. 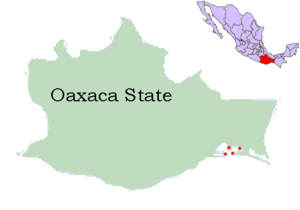 Huave is spoken in the four coastal towns of San Francisco del Mar, San Dionisio del Mar, San Mateo del Mar and Santa Catarina del Mar. The most vibrant speech community is in San Mateo del Mar which was fairly isolated until recently. Negative speakers' attitudes towards their language and a strong social pressure from the dominant Spanish language are the main reasons for the endangerment of Huave.

Although considered separate languages by SIL according to the needs of literacy materials, Campbell (1997) considers them dialects of a single language. INALI distinguishes two varieties, Eastern (Dionisio and Francisco) and Western (Mateo and Maria).

Practical orthographies are currently in use by literate speakers in San Mateo, San Francisco, San Dionisio and Santa María del Mar. There is an effort going on by the Mexican INALI (National Institute for Indigenous Languages) to standardize the orthography together with speakers from all four communities.

'and they went to kill rabbits. One (of them) said:'