Auchincloss graduated in 1920 from Yale University, where he was elected to the Elihu Senior Society. He earned a law degree from Columbia University in 1924. Auchincloss served in the United States Navy during World War I.

Auchincloss had been a special agent with the Commerce Department before joining the State Department as an aviation specialist in 1927. Four years later, he resigned government service and used some of the enormous inheritance from his mother to found the Washington brokerage firm of Auchincloss, Parker & Redpath. 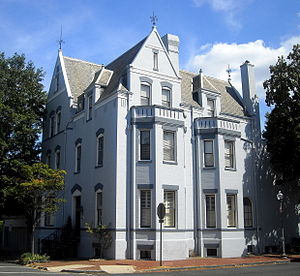 He worked for the Office of Naval Intelligence and the War Department during World War II. He was commissioned with the rank of lieutenant in the Naval Reserve on May 26, 1942. [3]

Auchincloss was responsible for getting Jacqueline Bouvier her first job in journalism at the Washington Times-Herald. He gave her away at her wedding to future president John F. Kennedy, the reception of which was held at Hammersmith Farm on September 12, 1953. A long-time financial contributor to the Republican Party, he contributed to the campaign of his Democratic stepson-in-law, saying "I want to live in harmony with Mrs. Auchincloss and all the other members of the family."