Banzer was native to the rural lowlands of the Santa Cruz Department. He attended military schools in Bolivia, Argentina, Brazil and the United States, including the Armored Cavalry School at Fort Hood, Texas. He took a Motor Officer Course at the School of the Americas. He was a descendant of the German immigrant Georg Banzer Schewetering.

Banzer was promoted to colonel in 1961, and appointed three years later to head the Ministry of Education and Culture in the government of General René Barrientos, a personal friend. Banzer became increasingly involved in politics, siding with the right wing of the Bolivian Army. He was also appointed director of the Military Academy and the Coronel Gualberto Villarroel Military School.

In 1970, President Juan José Torres was leading the country in a leftist direction, arousing the ire and mistrust of conservative anti-communist circles in Bolivia and, crucially, in the Nixon administration. He had called an Asamblea del Pueblo, or People's Assembly, in which representatives of specific "proletarian" sectors of society were represented (miners, unionized teachers, students, peasants). The Assembly was imbued with all the powers of a working parliament, even though the right-wing opponents of the regime tended to call it a gathering of virtual soviets. Torres also allowed labor leader, Juan Lechín, to resume his post as head of the Central Obrera Boliviana/Bolivian Workers' Union (COB). These measures, coupled with Ovando's earlier nationalization of Gulf Oil properties, angered his opponents even more, chief among whom was Banzer and his US supporters. In early 1971, a faction of the Bolivian military attempted to unseat the new president but failed, whereupon Banzer fled to Argentina, but did not give up his ambitions to the presidency. 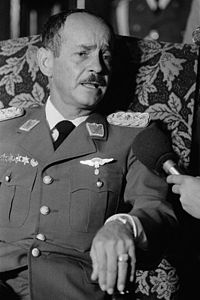 On August 18, 1971, General Banzer, at long last, masterminded a successful military uprising that erupted in Santa Cruz de la Sierra, where he had many supporters. Eventually, the plotters gained control over the La Paz garrisons, although not without considerable bloodshed. The combined levels of United States and Brazilian involvement for the coup d'état have been debated but it is apparent that significant clandestine financial & advisory assistance existed at a critical level within the Nixon administration for Banzer. With such backing secured, General Banzer emerged as the strong man of the new regime, and, on August 22, was given full power as president. Conversely, President Juan José Torres was forced to take refuge in Buenos Aires, Argentina where five years later he was kidnapped and assassinated by right-wing death squads associated with the Videla government and with the acquiescence of Hugo Banzer.[citation needed] His murder was part of Operation Condor. Interestingly, he received the political support of the center-right Movimiento Nacionalista Revolucionario (MNR) of former president Víctor Paz Estenssoro and the conservative Falange Socialista Boliviana of Mario Gutiérrez, considered to be the two largest parties in the country. For the next seven years, and with the rank of Army General, Banzer ruled Bolivia as dictator.

Frustrated by the political divisions and protests that characterized the Torres and Ovando years, and, traditionally an enemy of dissent and freedom of speech, Banzer banned all the left-leaning parties, suspended the powerful Central Obrera Boliviana, and closed the nation's universities. "Order" was now the paramount aim, and no means were spared to restore authority and stifle dissent. Buoyed by the initial legitimacy provided by Paz and Gutierrez's support, the dictator ruled with a measure of civilian support until 1974, when the main parties realized he did not intend to hold elections and was instead using them to perpetuate himself in power. At that point, Banzer dispensed with all pretenses and banned all political activity, exiled all major leaders (Paz Estenssoro included), and proceeded to rule henceforth solely with military support.

Human rights groups claim that during Banzer's 1971-78 tenure (known as the Banzerato) several thousand Bolivians sought asylum in foreign countries, 3,000 political opponents were arrested, 200 were killed, and many more were tortured. In the basement of the Ministry of the Interior or "the horror chambers" around 2,000 political prisoners were held and tortured during the 1971-1978 military rule.[1] Many others simply disappeared.[2] Among the victims of the regime are Colonel Andrés Selich, Banzer's first Minister of the Interior and co-conspirator in the August 1971 coup. Selich was accused of plotting to overthrow Banzer and died of blows sustained while in custody. Two other leaders with sufficient stature to potentially eclipse the dictator were murdered under suspicious circumstances while in exile: General Joanquin Zenteno Anaya and former President Juan José Torres, both in 1976.

Much of the stability achieved by the Banzerato was sustained by the constant flow of easy credit from abroad, which was often used on mammoth "white elephant" projects of dubious usefulness but which nonetheless impressed certain sectors of the population. The loans would soon raise Bolivia's external debt to record levels, but proved useful in the manipulation of political patronage. In 1975, Banzer restored diplomatic relations with Chile, broken since 1962, with an eye toward obtaining an access to the Pacific Ocean, denied to Bolivia since the loss of its maritime coast in the 19th century War of the Pacific. The Chilean dictator Augusto Pinochet offered a narrow outlet just north of the port of Arica, on the border with Peru, on lands that had previously belonged to that country. According to the terms of the treaty that handed that territory to Chile, Peru had to agree to any proposal of transferring that land to a third party. Peru refused to accept the Pinochet proposal and instead created its own counter-proposal, which declared Arica and its waters an area of joint-sovereignty between the three nations. Chile refused this proposal and talks with Bolivia ended. Diplomatic relations were once again frozen in 1978.

Democratic opening of 1978 and toppling

Pressure from the Carter administration forced Banzer to institute a carefully regulated "democratic opening" in 1978. A restricted amnesty was declared, and the country prepared for democratic elections. Since the Bolivian constitution did not at the time allow the election of a sitting president, the general designated a surrogate, officially-supported candidate, General Juan Pereda. It was assumed that Pereda would be elected with government "help" at the polls, rule for four years, and then allow Banzer to return as constitutional president once he had time to polish up his image and transition to civilian politics. Apparently, Banzer had second thoughts, for by election time the left-wing coalition of former president Hernán Siles (UDP) was far and away the most popular formula, and nothing could disguise it. Still, massive fraud was committed and Pereda was declared the winner; until protests paralyzed the country and independent organizations agreed that all exit polls indicated a result quite different from what was being purported. At this point, Banzer annulled the elections, denounced the electoral fraud, and disassociated himself from it altogether. He declared he would call elections again within a year or two.

He did not foresee the reaction of General Pereda, however, who felt used by Banzer to remain in power. A coup d'état ensued, many military officers having grown tired of the president's constant manipulation of the armed forces for his own political ends. After Banzer was forced to leave the Palacio Quemado in July 1978, Pereda was sworn in as president, although not a constitutional one, since the fraud could not be denied. He did blame Banzer, however, and stated non-comitally that he would call new elections within a reasonable span of time. Pereda, in turn, was overthrown in November 1978 by democratically-oriented officers under General David Padilla who, embarrassed by the events of the last few months (and suspecting that Pereda did not intend to call new elections either), promptly set a firm date for a new vote.

Upon leaving office, Banzer formed the ADN party (Acción Democrática Nacionalista), a large organization that attracted most conservative groups under his leadership. Banzer ran for elections in 1979 and 1980, obtaining third place in both contests. The 1979 contest remained inconclusive because, no candidate having received the necessary 50% of the vote, Congress had to determine the president, and it could not agree on any one candidate; the 1980 election would have led to the possession of Hernán Siles, had it not been it not for the bloody coup of July 17, 1980 which installed a reactionary (and cocaine-tainted) dictatorship led by General Luis García Meza. With the military's reputation badly damaged by the excesses of the 1980-82 dictatorship, in October 1982 the results of the 1980 elections were upheld to save the country the expense of yet another vote. Siles was sworn in and the 1980 Congress reconvened.

Banzer opposed bitterly the UDP government of Siles which lasted from 1982 to 1985, but turned more conciliatory when Víctor Paz Estenssoro was elected president (by congress, due to the virtual inattainability of the 50% necessary for direct election) in 1985. Indeed, Banzer's party claimed authorship of some of the most important neoliberal economic reforms instituted by Paz to curb galloping hyperinflation, repress the ever-troublesome labor unions, and reduce the size of the government. Banzer finished second in the 1989 elections, but supported in Congress the third-place finisher, the allegedly left-leaning Jaime Paz, who became President with ADN help, in return for Paz's promise to support him in a future election. The former dictator again finished second in 1993, this time to the MNR's Gonzalo Sánchez de Lozada. The MNRs plurality, in coalition with the small center-left Bolivia Libre party, made it possible to confirm the MNRs electoral victory. In the 1997 elections, however, Banzer finished first by a small plurality, and was able to take the presidency with the support of Paz and others in a broad rightist coalition.

Finally, in 1997, Banzer achieved his dream of becoming constitutionally-elected President of Bolivia, at the age of 71. Indeed, he was the first former dictator in Latin America's recent history to transition successfully to democratic politics and return to power by way of the ballot box. During his tenure he launched - under the guidelines outlined by the United States - a program to fight drug-trafficking in Bolivia which called for the eradication of coca, a controversial strategy. He also had the usual trouble with the unions. In 2001, he was diagnosed with lung cancer, and even though he had earned a five-year term (he had himself agitated to legally enlarge the presidential term) had to resign on August 7, 2001. He was succeeded by his Vice-President Jorge Quiroga.

Hugo Banzer was the president during the Water Wars in 2000 which centered on the privatization of the water works of Bolivia's third largest city Cochabamba. Many protested the subsequent rate hike. Violence occurred when police and demonstrators clashed. Banzer then declared a "state of siege". When officials of the consortium who had bought the right to run the water works fled after being told by the authorities that their safety could not be guaranteed, the Banzer government declared that they had abandoned the project, declared the contract void, and settled with the demonstrators.

For more details on this topic, see 2000 Cochabamba protests.