From Infogalactic: the planetary knowledge core
Jump to: navigation, search
Not to be confused with People's Republic of Hungary. 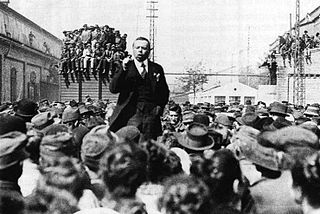 It was the successor of the Hungarian Democratic Republic and lasted only from 21 March until 1 August 1919. The state was led by Béla Kun and was not recognized by France, the UK or the US.[4] It was the second socialist state in the world to be formed after the October Revolution in Russia brought the Bolsheviks to power. The Hungarian Republic of Councils had military conflicts with the Kingdom of Romania, the Kingdom of Serbs, Croats and Slovenes and the evolving Czechoslovakia. It collapsed when Romanian forces occupied Budapest, after which the Kingdom of Hungary was reestablished.

As the Austro-Hungarian Monarchy collapsed in 1918, an independent Hungarian Democratic Republic was formed after the Aster Revolution. Official proclamation of the republic was on 16 November 1918 and its president became Mihály Károlyi. Károlyi struggled to establish the government's authority and to control the country.

An initial nucleus of a Hungarian communist party had been organized in a Moscow hotel on 4 November 1918, when a group of Hungarian prisoners of war and other communist proponents formed a Central Committee. Led by Béla Kun, the first members returned to Hungary, and on 24 November created the The Party of Communists from Hungary. The Communist party chose "The Party of Communists from Hungary" (Hungarian: Kommunisták Magyarországi Pártja) title instead of "Hungarian Communist Party", because—at the time—the vast majority of their following represented social class: the factory workers, the "proletariat," hadn't ethnic Hungarian roots in Hungary yet, and the ethnic Hungarians were only a minority in the newly founded party.[5] It recruited members while propagating party's ideas, radicalising many Social Democrats in the process. By February 1919, the party numbered 30,000 to 40,000 members, including many unemployed ex-soldiers, young intellectuals and ethnic minorities.[6]

The Communists came to power as the only group with an organised fighting force, promising Hungary would be able to defend its territory without conscription. (Kun promised the military help of the Soviet Red Army against Romanian, Czechoslovak and Yugoslav forces, none of whom were communist at that time).

Kun founded a newspaper, called Vörös Újság ("Red News") and concentrated on attacking Károlyi's government. During the following months, the Communist Party's power-base rapidly expanded. Their supporters began to stage aggressive demonstrations against the media. In one crucial incident, a demonstration turned violent on 20 February and the protesters attacked the editorial office of the Social Democrats' official paper, called Népszava (People's Word). In the ensuing chaos, seven people—including policemen—were killed. The government arrested the leaders of the Communist party,[6] banned Vörös Újság and closed down the party's buildings. The arrests were particularly violent, with police officers openly beating the communists. This resulted in a wave of public sympathy for the Communist Party. On 1 March, Vörös Újság was given permission to publish again, and the Communist Party's premises were re-opened. The leaders were permitted to receive guests in their prison, which allowed them to keep up with political affairs.

On 20 March, Károlyi announced that the Dénes Berinkey government would resign. On 21 March, he informed the Council of Ministers that only the Social Democrats could form a new government, as they were the party with the highest public support. In order to form a governing coalition, the Social Democrats started negotiations with the Communist leaders—who were still imprisoned—and decided to merge their two parties under the name of Hungarian Socialist Party.[7] For the Social Democrats, an alliance with the KMP not only increased their standing with the common people, but also gave them a potential link to the increasingly powerful Russian Communist Party, as Kun had ties with prominent Russian Bolsheviks. President Károlyi, who was an outspoken anti-Communist, was not informed about the fusion of the parties. Thus, while believing to have appointed a social democratic government, he found himself faced with one dominated by Communists.

Following Lenin's model, but without the direct participation of the workers' councils (soviets) from which it took its name, the newly united Socialist Party created a government called the Revolutionary Governing Council, which proclaimed the Hungarian Soviet Republic and dismissed President Károlyi on 21 March. This government consisted of a coalition of socialists and communists, but with the exception of Kun, all commissars were former social democrats.[8] The government was led by Sándor Garbai, but Kun, as Commissar of Foreign Affairs, held the real power. Under Kun, the new government, which had adopted in full the program of the Communists, decreed the abolition of aristocratic titles and privileges; the separation of church and state; codified freedom of speech and assembly; and implemented free education, language, and cultural rights to minorities (the last of which, at least, was not implemented in practice).[6]

The Communist government also nationalized industrial and commercial enterprises, and socialized housing, transport, banking, medicine, cultural institutions, and all landholdings of more than 40 hectares. These economic policies created high inflation while leading to food shortages across the land. Public support for Communists was also heavily dependent on their promise of restoring Hungary's imperial borders.[6] The government took steps toward normalizing foreign relations with the Triple Entente powers in an effort to gain back some of the land that Hungary was set to lose in the post-war negotiations. 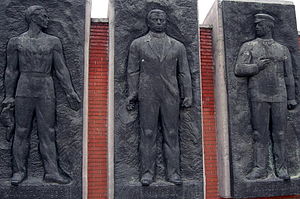 In a radio dispatch to the Russian SFSR, Kun informed Lenin that a "dictatorship of the proletariat" had been established in Hungary and asked for a treaty of alliance with the Russian SFSR.[6] The Russian SFSR refused because it was itself tied down in the Russian Civil War. The Hungarian government was thus left on its own, and a Red Guard was established under the command of Mátyás Rákosi.

In addition, a group of 200 armed men—known as the Lenin Boys—formed a mobile detachment under the leadership of József Cserny. This detachment was deployed at various locations around the country where counter-revolutionary movements were suspected to operate. The Lenin Boys, as well as other similar groups and agitators, killed and terrorised many people (e.g. armed with hand grenades and using their rifles' butts they disbanded religious ceremonies).[9] They executed victims without trial.[10] This caused a number of conflicts with the local population, some of which turned violent. 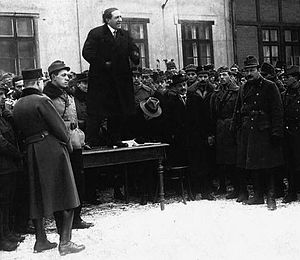 In late May, after the Entente military representative demanded more territorial concessions from Hungary, Kun attempted to fulfill his promise to restore Hungary's borders. At some point in June, the Hungarian Red Army invaded the eastern part of the newly-forming Czechoslovak state (today's Slovakia), then controlled by Czechoslovak forces and declared a Slovak Soviet Republic in Prešov on 16 June 1919. The Hungarian Red Army achieved some military successes: under the lead of Colonel Aurél Stromfeld, it ousted Czech troops from the north, and planned to march against the Romanian army in the east. Despite initial military success, however, Kun withdrew his troops about three weeks later when the French promised the Hungarian government that Romanian forces would withdraw from the Tiszántúl. This concession shook his popular support. Following the Red Army's retreat from the north, the Romanian forces were not pulled back.

The situation of the Hungarian Communists began to deteriorate when, after a failed coup by the Social Democrats on 24 June, the new Communist government of Antal Dovcsák resorted to large-scale reprisals. Revolutionary tribunals ordered executions of people who were suspected of having been involved in the attempted coup. This became known as the "Red Terror", and greatly reduced domestic support for the government.

The Hungarian Soviet found it increasingly difficult to fight Czechoslovakia and later Romania with the small volunteer force, and support for both the war and the Communist Party was waning at home, partly due to the most dedicated Communists having volunteered for combat.

Kun then unsuccessfully turned the Hungarian Red Army on the Romanians, who broke through the weak Hungarian lines on 30 July.

Béla Kun, together with other high-ranking Communists, fled to Austria on 1 August[6] with only a minority, including György Lukács, the former Commissar for Culture and noted Marxist philosopher, remaining to organise an underground Communist Party.[11] The Budapest Workers' Soviet elected a new government, headed by Gyula Peidl, which only lasted a few days before Romanian forces entered Budapest on 6 August, putting an end to the Hungarian Soviet Republic.[12][13][14]

In the power vacuum created by the fall of the Soviet Republic and the presence of the Romanian Army, semi-regular detachments (technically under Horthy's command, but mostly independent in practice) initiated a campaign of violence against Communists, leftists, and Jews, known as the White Terror.[15] Many supporters of the Hungarian Soviet Republic were executed without trial; others, including Péter Ágoston, Ferenc Bajáki, Dezső Bokányi, Antal Dovcsák, József Haubrich, Kalmár Henrik, Kelen József, György Nyisztor, Sándor Szabados, and Károly Vántus, were imprisoned by trial ("comissar suits"). Most of them were later released to the Soviet Union by amnesty during the reign of Horthy, after a prisoner exchange agreement between Hungary and the Russian Soviet government in 1921. In all, about 415 prisoners were released as a result of this agreement.[16] Kun himself and an unknown number of other Hungarian communists were executed during the Great Purge of the late 1930s.[6]