From Infogalactic: the planetary knowledge core
Jump to: navigation, search
This article is about the track and field event. For the equestrian form, see Hurdling (horse race).

Hurdling is the act of running and stepping over an obstacle at speed. In the sport of athletics, hurdling forms the basis of a number track and field events which are a highly specialized form of obstacle racing. In these events, a series of barriers known as hurdles are set at precisely measured heights and distances which each athlete must pass by running over.[1][2][3] Failure to pass over, by passing under, or intentionally knocking over hurdles will result in disqualification. Accidental knocking over of hurdles is not cause for disqualification,[4] but the hurdles are weighted to make doing so disadvantageous.[4]

In track races, hurdles are normally between 68–107 cm in height (or 27-42 inches), and vary depending on the age and gender of the hurdler.[6] Events from 50 to 110 meters are technically known as high hurdles races, while longer competitions are low hurdles races. The track hurdles events are forms of sprinting competitions, although the 400 m version is less anaerobic in nature and demands athletic qualities similar to the 800 meters flat race.

A hurdling technique can also be found in the steeplechase, although in this event athletes are also permitted to step on the barrier to clear it.[4] Similarly, in cross country running athletes may hurdle over various natural obstacles, such as logs, mounds of earth and small streams – this represents the sporting origin of the modern events. Horse racing has its own variant of hurdle racing, with similar principals.[7]

Other distances are run, particularly indoors but occasionally outdoors. The sprint hurdle race indoors is usually 60 meters for both men and women, although races 55 meters or 50 meters long are sometimes run, especially in the United States. A 60 meter indoor race is run over 5 hurdles. A shorter race may occasionally have only 4 hurdles. Outdoors, a long hurdle race is sometimes shortened to 300 meters for younger participants, who run over 8 hurdles. For example, high school and middle school athletes in Pennsylvania run the 300 meter hurdles instead of running the 400 meter hurdles, like what the majority of state competitors run today. These hurdles are spaced distance-wise identical to the beginning of a standard 400 meter race which would have 10 hurdles. There are also 200 meter races for middle school and younger divisions over 5 hurdles (spaced in the same position as the last 5 hurdles of a standard 400 meter race).[9] Other forms, such as the 200 m hurdles with 10 low hurdles is run in for example Norway.[10][11]

There are five hurdle heights on most standard hurdles. The highest position (sometimes "college high" or "open high") is used for men's sprint hurdle races (60 m, and 110 m), which are 42 inches (106.7 cm). The next highest, (sometimes "high school high"[9] ) 39 inches (99.1 cm) is used by veteran men under age 50, and younger boys. The middle position of 36 inches (91.44 cm), (sometimes "intermediate") which is used for men's long hurdle races (400 m) plus some youth and veteran age divisions. The next lower position, 33 inches (83.8 cm) is called the "women's high"[9] used for women's short hurdle races. The lowest position, called the "low hurdle" 30 inches (76.2 cm) is used for women's long hurdles plus many youth and veteran races. Some races call for 27 inches or 68.6 centimetres for youth or veteran events.[12] Hurdles that go to this position are rare and are notable by having a sixth position.[9] 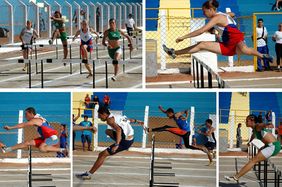 A sequence of hurdling

There are variations on hurdle height and spacing for the age groups of athletes competing. See Masters athletics (track and field) and Youth athletics.[13]

The men's 200 meters low hurdles event was on the Olympic athletics programme for the 1900 and 1904 Summer Olympics. These low hurdles events were widely participated in the early part of the 20th century, particularly in North America. However, beyond these two Olympic outings, they never gained a consistent place at international competitions and became increasing rare after the 1960s. 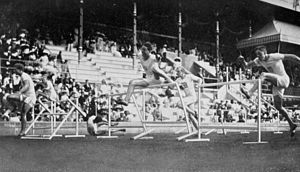 A sequence showing hurdling, from 1900. Today a distance to the first hurdle of more than 1 m is advised. 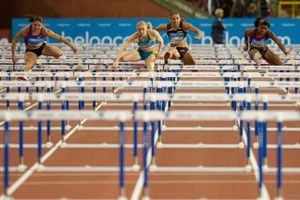 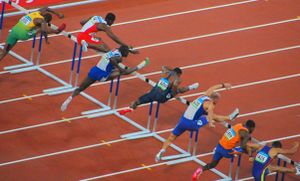 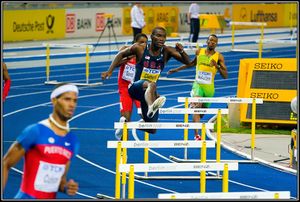 In order to obtain the optimal hurdling technique, one must first learn the proper running techniques. It's important that the runner stays on the balls of his or her feet for the entirety of the race. This makes a fluid movement between each stage of the race.

There is a technique that is desirable to accomplish efficient hurdling action during a race. Many runners rely mainly on raw speed, but proper technique and well-planned steps leading up to and between each hurdle can allow an efficient hurdler to outrun faster opponents. Generally, the efficient hurdler spends the minimum amount of time and energy going vertically over the hurdle, thus achieving maximum speed in the horizontal race direction down the track.

When approaching the first hurdle, athletes try to avoid stutter stepping (a term used to refer to the cutting of stride length before reaching a hurdle). This cuts the runner's momentum and costs valuable time. Athletes attack the hurdle by launching at it from 6–7 feet away (depending on runner's closing speed). the lead leg extended yet slightly bent (because a straight leg leads to more time over the hurdle) so that the heel just narrowly clears the barrier's height. After launching, the trail leg is tucked in horizontally and flat, close to the side of the hip. The objective is to minimize center-of-gravity deviation from normal sprinting and reduce time spent flying through the air.

In order to hurdle properly and not simply jump over it, a runner must adjust his or her hips to raise them over the hurdles. This involves the correct use of the lead leg, trail leg, and arm positions. The lead leg is the leg that goes over the hurdle first, and should remain fairly straight. Upon crossing over the hurdle barrier, the runner's lead leg snaps down quickly landing roughly 1 metre (3 feet) beyond the hurdle. The trail leg follows the lead leg. The trail leg drives forward at the knee (not swinging, as swinging causes the trunk to straighten up), and pulls through to maintain stride length. An effective trail leg will be parallel to the top of the hurdle and will be as close to the top of the hurdle as possible. The arm position is one of the most critical aspects that people often ignore. As the lead leg is being lifted over the hurdle, the opposite arm should cross the body parallel to the ground. This helps with the runner's balance and rhythm throughout the race.

In men's hurdles it is usually necessary to straighten the leg at the top of the flight path over the hurdle, although a partial bend in the knee gains a faster push off when the athlete hits the ground. The ability to do this depends on the runners's leg length. As soon as the foot has cleared the hurdle, the knee starts bending again to lessen the effect of a long, slow pendulum. In women's hurdles, the lead leg is usually straight and the center of gravity does not rise relative to a normal running stride. Another way to view it is the foot path: "shortest path up and shortest path down". The opposite arm reaches farther forward and the elbow travels out to the side and then behind to make room for the trailing leg. The trailing leg also leads with the knee, but the foot and knee is horizontal, tucked up as tight as possible into the armpit.

As soon as the lead leg begins its descent, a strong downward push is exerted to enable the trailing leg's knee to come up under the armpit and in front of the chest. This enables recovery of some of the energy expended in the flight. As the lead leg touches down to the ground, it's critical that the runner remains in a sprint. As soon as his or her lead leg touches down, the trail leg arm drives the rest of the body forward.

In the 100 and 110 meter hurdle events, the fastest hurdlers use the three-step technique. This means that three large steps are taken in between all of the hurdles. In order to do this efficiently, hurdlers must take long strides and maintain their speed for the entire race. If a hurdler begins to slow down while three-stepping, they may not be able to make it through all of the hurdles and may have to switch to four-stepping or five-stepping technique. When three- or five-stepping, a hurdler will use the same lead leg for all of the hurdles. If a hurdler four-steps, they will have to switch lead legs at each hurdle.

A modern hurdle will fall over if a runner hits it. There is no penalty for hitting a hurdle (provided this is not judged deliberate). The misconception is based on old rules before the hurdles were weighted. In the 1932 Olympics, Bob Tisdall famously won the Olympic Gold medal in the 400 metre hurdles in World Record time, but was not credited with the record due to knocking over a hurdle. There can be disqualification if a hurdler knocks a hurdle into an opponents lane and it is judged to have interfered with the opponent's ability to run the race. There are now specifications for the tipping weight of a hurdle (the weights need to be adjusted to correspond with the height of the hurdle) so hitting a hurdle theoretically slows down the rhythm of the hurdler. However, pushing the hurdle with one's hands or running out of one's lane as a result of hitting the hurdle is cause for disqualification. While hitting hurdles is not generally considered desirable, a few sprint hurdlers have succeeded despite knocking over many hurdles. Contact with hurdles can decrease speed and also result in disruption of a hurdler's technique. Some coaches suggest if you lightly "kiss" the hurdle with the side of the leg closest to the hurdle, it can help with the runners speed by keeping the runner closer to the ground.[8]

There are also shuttle hurdle relay races, although they are rarely run. They are usually only found at track meets that consist entirely of relay races. In a shuttle hurdle relay, each of four hurdlers on a team runs the opposite direction from the preceding runner. The standard races correspond to the standard sprint hurdle races: 4 × 110 m for men and 4 × 100 m for women.[14] The shuttle hurdle relay has a maximum of only 4 teams, since most tracks only have 8 lanes. Two lanes will be taken up by one team. The #1 and #3 runners on the team will run in one direction down one specific lane and the #2 and #4 runners will run in the opposite direction in the other lane. The runners on each team go in sequence from 1 to 4. Instead of using batons the runners waiting for their teammate to finish must wait until their teammate gets to a certain point to begin their part of the race. There will be an official looking to see if they take off too early. If they do so then they will be disqualified, if they take off late then it will just hurt their time and chances of winning the event.