Hydroacoustics is a general term for the study and application of sound in water. The term comes from Greek ὕδωρ, water,[1] and ακουστική, acoustics. Hydroacoustics, utilizing sonar technology, is most commonly used for detection, assessment, and monitoring of underwater physical and biological characteristics. 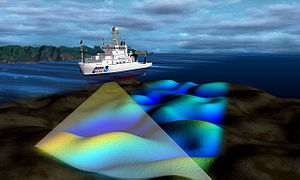 Hydroacoustics can be utilized to detect the depth of a water body (bathymetry), as well as the presence or absence, abundance, distribution, size, and behavior of underwater plants and animals. Hydroacoustic sensing involves "passive acoustics" (listening for sounds) or active acoustics making a sound and listening for the echo, hence the common name for the device, echo sounder or echosounder.

There are a number of different causes of noise from shipping. These can be subdivided into those caused by the propeller, those caused by machinery, and those caused by the movement of the hull through the water. The relative importance of these three different categories will depend, amongst other things, on the ship type [2] One of the main causes of hydro acoustic noise from fully submerged lifting surfaces is the unsteady separated turbulent flow near the surface's trailing edge that produces pressure fluctuations on the surface and unsteady oscillatory flow in the near wake.The relative motion between the surface and the ocean creates a turbulent boundary layer (TBL) that surrounds the surface. The noise is generated by the fluctuating velocity and pressure fields within this TBL.