Hydrogen fluoride is a chemical compound with the chemical formula HF. This colorless gas or liquid is the principal industrial source of fluorine, often in the aqueous form as hydrofluoric acid, and thus is the precursor to many important compounds including pharmaceuticals and polymers (e.g. Teflon). HF is widely used in the petrochemical industry and is a component of many superacids. Hydrogen fluoride boils near room temperature, while other hydrogen halides evaporate at much lower temperatures. Unlike other hydrogen halides, HF is lighter than air and diffuses relatively quickly through porous substances.

Hydrogen fluoride is a highly dangerous gas, forming corrosive and penetrating hydrofluoric acid upon contact with living tissue. The gas can also cause blindness by rapid destruction of the corneas.

French chemist Edmond Frémy (1814–1894) is credited with discovering anhydrous hydrogen fluoride while trying to isolate fluorine, although Carl Wilhelm Scheele prepared hydrofluoric acid in large quantities in 1771, and this acid was known in the glass industry before then.

HF molecules interact through hydrogen bonds, thus creating extra clustering associations with other HF molecules. Because of this, hydrogen fluoride behaves more like water than other hydrogen halides, such as HCl.[6][7][8] This hydrogen bonding between HF molecules gives rise to high viscosity in the liquid phase and lower than expected pressure in the gas phase. Hydrogen fluoride does not boil until 20 °C in contrast to the heavier hydrogen halides which boil between −85 °C (−120 °F) and −35 °C (−30 °F).

Hydrogen fluoride is fully miscible with water (dissolves in any proportion), while the other hydrogen halides have large solubility gaps with water. Hydrogen fluoride and water also form several compounds in the solid state, most notably a 1:1 compound that does not melt until −40 °C (−40 °F), which is 44 °C (79 °F) above the melting point of pure HF.[9]

Unlike other hydrohalic acids, such as hydrochloric acid, hydrogen fluoride is only a weak acid in dilute aqueous solution.[10] This is in part a result of the strength of the hydrogen-fluorine bond, but also of other factors such as the tendency of HF, H
2O, and F−
anions to form clusters.[note 1] At high concentrations, HF molecules undergo homoassociation to form polyatomic ions (such as bifluoride, HF−
2) and protons, thus greatly increasing the acidity.[12] This leads to protonation of very strong acids like hydrochloric, sulfuric, or nitric when using concentrated hydrofluoric acid solutions.[13] Although hydrofluoric acid is regarded as a weak acid, it is very corrosive, even attacking glass when hydrated.[12]

The acidity of hydrofluoric acid solutions vary with concentration owing to hydrogen-bond interactions of the fluoride ion. Dilute solutions are weakly acidic with an acid ionization constant Ka = 6.6×10−4 (or pKa = 3.18),[14] in contrast to corresponding solutions of the other hydrogen halides which are strong acids (pKa < 0). Concentrated solutions of hydrogen fluoride are much more strongly acid than implied by this value, as shown by measurements of the Hammett acidity function H0[15] (or "effective pH"). The H0 for 100% HF is estimated to be between −10.2 and −11, comparable to the value −12 for sulfuric acid.[16][17]

In thermodynamic terms, HF solutions are highly non-ideal, with the activity of HF increasing much more rapidly than its concentration. The weak acidity in dilute solution is sometimes attributed to the high H—F bond strength, which combines with the high dissolution enthalpy of HF to outweigh the more negative enthalpy of hydration of the fluoride ion.[18] However, Giguère and Turrell[19][20] have shown by infrared spectroscopy that the predominant solute species is the hydrogen-bonded ion-pair [H3O+•F−], which suggests that the ionization can be described as a pair of successive equilibria:

The first equilibrium lies well to the right (K >> 1) and the second to the left (K << 1), meaning that HF is extensively dissociated, but that the tight ion pairs reduce the thermodynamic activity coefficient of H3O+, so that the solution is effectively less acidic.[21]

In concentrated solution, the additional HF causes the ion pair to dissociate with formation of the hydrogen-bonded hydrogen difluoride ion.[19][21]

The increase in free H3O+ due to this reaction accounts for the rapid increase in acidity, while fluoride ions are stabilized (and become less basic) by strong hydrogen bonding to HF to form HF2−. This interaction between the acid and its own conjugate base is an example of homoassociation (homoconjugation). At the limit of 100% liquid HF, there is self-ionization[22][23]

The acidity of anhydrous HF can be increased even further by the addition of Lewis acids such as SbF5, which can reduce H0 to −21.[16][17]

Dry hydrogen fluoride readily dissolves low-valent metal fluorides as well as several molecular fluorides. Many proteins and carbohydrates can be dissolved in dry HF and recovered from it. In contrast, most non-fluoride inorganic chemicals react with HF rather than dissolving.[24]

Hydrogen fluoride is produced by the action of sulfuric acid on pure grades of the mineral fluorite and also as a side-product of the extraction of the fertilizer precursor phosphoric acid from various minerals. See also hydrofluoric acid.

The anhydrous compound hydrogen fluoride is more commonly used than its aqueous solution, hydrofluoric acid. HF serves as a catalyst in alkylation processes in oil refineries. A component of high-octane petrol (gasoline) called "alkylate" is generated in alkylation units that combine C3 and C4 olefins and iso-butane to generate petrol (gasoline).[25]

HF is a reactive solvent in the electrochemical fluorination of organic compounds. In this approach, HF is oxidized in the presence of a hydrocarbon and the fluorine replaces C–H bonds with C–F bonds. Perfluorinated carboxylic acids and sulfonic acids are produced in this way.[25]

Hydrogen fluoride is an important catalyst used in the majority of the installed linear alkyl benzene production in the world. The process involves dehydrogenation of n-paraffins to olefins, and subsequent reaction with benzene using HF as catalyst.

Elemental fluorine, F2, is prepared by electrolysis of a solution of HF and potassium bifluoride. The potassium bifluoride is needed because anhydrous hydrogen fluoride does not conduct electricity. Several million kilograms of F2 are produced annually.[26]

Acyl chlorides or acid anhydrides react with hydrogen fluoride to give acyl fluorides.[27]

HF is often used in palynology to remove silicate minerals, for extraction of dinoflagellate cysts, acritarchs and chitinozoans.

1,1-Difluoroethane is produced by the mercury-catalyzed addition of hydrogen fluoride to acetylene:[28] 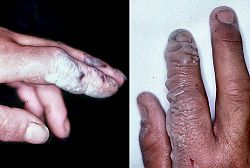 HF burns, not evident until a day after

Upon contact with moisture, including tissue, hydrogen fluoride immediately converts to hydrofluoric acid, which is highly corrosive and toxic, and requires immediate medical attention upon exposure.[29] Breathing in hydrogen fluoride at high levels or in combination with skin contact can cause death from an irregular heartbeat or from fluid buildup in the lungs.[29]