The hydrosphere (from Greek ὕδωρ - hydōr, "water"[1] and σφαῖρα - sphaira, "sphere"[2]) in physical geography describes the combined mass of water found on, under, and over the surface of a planet.

Igor Shiklomanov, the man selected by the United Nations to do its world inventory of water resources,[3] estimated that there are 1386 million cubic kilometres of water on Earth.[4] This includes water in liquid and frozen forms in groundwater, glaciers, oceans, lakes and streams. Saltwater accounts for 97.5% of this amount. Fresh water accounts for only 2.5%. Of this fresh water 68.7% is in the "form of ice and permanent snow cover in the Arctic, the Antarctic, and in the mountainous regions. Next, 29.9% exists as fresh groundwaters. Only 0.26% of the total amount of fresh waters on planet Earth is easily accessible. It is found in lakes, reservoirs and river systems, the principal elements of water ecosystems."[4] The total mass of the Earth's hydrosphere is about 1.4 × 1018 tonnes, which is about 0.023% of the Earth's total mass. About 20 × 1012 tonnes of this is in the Earth's atmosphere (for practical purposes, 1 cubic metre of water weighs one tonne). Approximately 75% of the Earth's surface, an area of some 361 million square kilometers (139.5 million square miles), is covered by ocean. The average salinity of the Earth's oceans is about 35 grams of salt per kilogram of sea water (3.5%).[5] 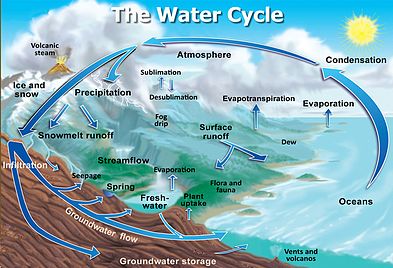 The hydrological cycle transfers water from one state or reservoir to another. Reservoirs include atmospheric moisture (snow, rain and clouds), oceans, rivers, lakes, groundwater, subterranean aquifers, polar icecaps and saturated soil. Solar energy, in the form of heat and light (insolation), and gravity cause the transfer from one state to another over periods from hours to thousands of years. Most evaporation comes from the oceans and is returned to the earth as snow or rain (page 27).[3] Sublimation refers to evaporation from snow and ice. Transpiration refers to the expiration of water through the minute pores or stomata of trees. Evapotranspiration is the term used by hydrologists in reference to the three processes together, transpiration, sublimation and evaporation.[3]

In his book Water, Marq de Villiers described the hydrosphere as a closed system in which water exists. The hydrosphere is intricate, complex, interdependent, all-pervading and stable and "seems purpose-built for regulating life (de Villiers 2003:26)."[3] De Villiers claimed that, "On earth, the total amount of water has almost certainly not changed since geological times: what we had then we still have. Water can be polluted, abused, and misused but it is neither created nor destroyed, it only migrates. There is no evidence that water vapor escapes into space (page 26)."[3]

Water is a basic necessity of life. Since 2/3 of the Earth is covered by water, the Earth is also called the blue planet and the watery planet.[notes 1] Hydrosphere plays an important role in the existence of the atmosphere in its present form. Oceans are important in this regard. When the Earth was formed it had only a very thin atmosphere rich in hydrogen and helium similar to the present atmosphere of Mercury. Later the gases hydrogen and helium were expelled from the atmosphere. The gases and water vapor released as the Earth cooled became our present atmosphere. Other gases and water vapor released by volcanoes also entered the atmosphere. As the Earth cooled the water vapor in the atmosphere condensed and fell as rain. The atmosphere cooled further as atmospheric carbon dioxide dissolved in to rain water. In turn this further caused the water vapor to condense and fall as rain. This rain water filled the depressions on the Earth's surface and formed the oceans. It is estimated that this occurred about 4000 million years ago. The first life forms began in the oceans. These organisms did not breathe oxygen. Later, when cyanobacteria evolved, the process of conversion of carbon dioxide into food and oxygen began. As a result, our atmosphere has a distinctly different composition from that of the other planets; it is a fundamental requirement for life on Earth.

According to Igor A. Shiklomanov, it takes 2500 years for the complete recharge and replenishment of oceanic waters, 10,000 years for permafrost and ice, 1500 years for deep groundwater and mountainous glaciers, 17 years in lakes and 16 days in rivers.[4]

"Specific water availability is the residual (after use) per capita quantity of fresh water."[4] Fresh water resources are unevenly distributed in terms of space and time and can go from floods to water shortages within months in the same area. In 1998 76% of the total population had a specific water availability of less than 5.0 thousand m3 per year per capita. Already by 1998, 35% of the global population suffered "very low or catastrophically low water supplies" and Shiklomanov predicted that the situation would deteriorate in the twenty-first century with "most of the Earth's population will be living under the conditions of low or catastrophically low water supply" by 2025. There is only 2.5% of fresh water in the hydrosphere.