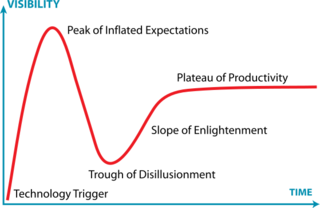 The Hype Cycle is a branded graphical presentation developed and used by US Information Technology (IT) research and advisory firm Gartner for representing the maturity, adoption and social application of specific technologies. The Hype Cycle provides a graphical and conceptual presentation of the maturity emerging technologies through five phases. 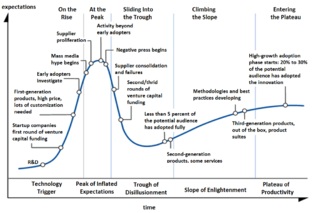 Each Hype Cycle drills down into the five key phases of a technology’s life cycle.

The term "Hype Cycle" and each of the associated phases are now used more broadly in the marketing of new technologies.

Hype (in the more general media sense of the term "hype"[1]) plays a large part in the adoption of new media forms by society. Terry Flew states[citation needed] that hype (generally the enthusiastic and strong feeling around new forms of media and technology in which people expect everything will be modified for the better[citation needed]) surrounding new media technologies and their popularization, along with the development of the Internet, is a common characteristic. But following shortly after the period of 'inflated expectations', as per the diagram above, the new media technologies quickly fall into a period of disenchantment, which is the end of the primary, and strongest, phase of hype.

Many analyses of the Internet in the 1990s featured large amounts of hype,[2][3][4] which created "debunking" responses.[1] However, such hype and the negative and positive responses toward it have now[when?] given way to research that looks empirically at new media and its impact.

A longer-term historical perspective on such cycles can be found in the research of the economist Carlota Perez.[citation needed] D R Laurence in Clinical Pharmacology described a similar process in drug development in the seventies.[citation needed]

There have been numerous criticisms[5][6][7] of the hype cycle, prominent among which are that it is not a cycle, that the outcome does not depend on the nature of the technology itself, that it is not scientific in nature, and that it does not reflect changes over time in the speed at which technology develops. Another is that the "cycle" has no real benefits to the development or marketing of new technologies and merely comments on pre-existing trends. Specific disadvantages when compared to, for example, technology readiness level are: