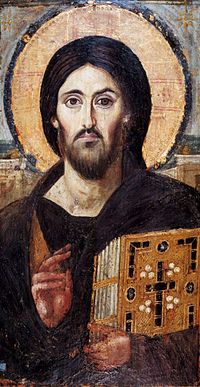 The oldest known icon of Christ Pantocrator - Saint Catherine's Monastery. The two different facial expressions on either side emphasize Christ's dual nature as both divine and human.[1][2] 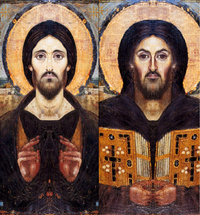 Photoshop composites of the two sides of the face.

Hypostatic union (from the Greek: ὑπόστασις hypóstasis, "sediment, foundation, substance, subsistence") is a technical term in Christian theology employed in mainstream Christology to describe the union of Christ's humanity and divinity in one hypostasis, or individual existence.[3]

The First Council of Ephesus in 431 AD recognized this doctrine and affirmed its importance, stating that the humanity and divinity of Christ are made one according to nature and hypostasis in the Logos.

The Greek term hypostasis had come into use as a technical term prior to the Christological debates of the late fourth and fifth centuries. In pre-Christian times, Greek philosophy (primarily Stoicism) used the word.[4][5] Some occurrences of the term hypostasis in the New Testament foreshadow the later, technical understanding of the word; especially Hebrews 1:3. Although it can translate literally as "substance", this has been a cause of some confusion;[6] accordingly New American Standard Bible translates it as "subsistence". Hypostasis denotes an actual, concrete existence, in contrast with abstract categories such as Platonic ideals.

Apollinaris of Laodicea was the first to use the term hypostasis in trying to understand the Incarnation.[7] Apollinaris described the union of the divine and human in Christ as being of a single nature and having a single essence — a single hypostasis.

In the 5th century, a dispute arose between Cyril of Alexandria and Nestorius in which Nestorius claimed that the term theotokos could not be used to describe Mary, the mother of Christ. Nestorius argued for two distinct natures of Christ, maintaining that God could not be born because the divine nature is unoriginate. Therefore Nestorius believed that the man Jesus of Nazareth was born in union with, but separate from and not strictly identifiable with, the Logos of God. The Council of Ephesus under the leadership of Cyril himself as well as the Ephesian bishop Memnon labeled Nestorius a neo-adoptionist, implying that the man Jesus is divine and the Son of God only by grace and not by nature, and deposed him as a heretic. In his letter to Nestorius, Cyril used the term "hypostatic" (Greek, kath' hypostasin) to refer to Christ's divine and human natures being one, saying, “We must follow these words and teachings, keeping in mind what ‘having been made flesh’ means …. We say … that the Word, by having united to himself hypostatically flesh animated by a rational soul, inexplicably and incomprehensibly became man.”[8]

The preeminent Antiochene theologian Theodore of Mopsuestia, contending against the monophysite heresy of Apollinarism, is believed to have taught that in Christ there are two natures (dyophysite), human and divine, and two corresponding hypostases (in the sense of "subject", "essence", or "person") which co-existed.[9] However in Theodore's time the word hypostasis could be used in a sense synonymous with ousia (which clearly means "essence" rather than "person") as it had been used by Tatian and Origen. The Greek and Latin interpretations of Theodore's Christology have come under scrutiny since the recovery of his Catechetical Orations in the Syriac language.

The Chalcedonian Definition agreed with Theodore that there were two natures in the Incarnation. However, the Council of Chalcedon also insisted that hypostasis be used as it was in the Trinitarian definition: to indicate the person and not the nature as with Apollinaris.

Thus, the Council declared that in Christ there are two natures; each retaining its own properties, and together united in one subsistence and in one single person (εἰς ἓν πρόσωπον καὶ μίαν ὑπόστασιν, eis hèn prósōpon kaì mían hypóstasin).[10]

As the precise nature of this union is held to defy finite human comprehension, the hypostatic union is also referred to by the alternative term "mystical union."

The Oriental Orthodox Churches, having rejected the Chalcedonian Creed, were known as Monophysites because they would only accept a definition that characterized the incarnate Son as having one nature. The Chalcedonian "in two natures" formula (based, at least partially, on Colossians 2:9) was seen as derived from and akin to a Nestorian Christology.[11] Contrariwise, the Chalcedonians saw the Oriental Orthodox as tending towards Eutychian Monophysitism. However, the Oriental Orthodox have in modern ecumenical dialogue specified that they have never believed in the doctrines of Eutyches, that they have always affirmed that Christ's humanity is consubstantial with our own, and they thus prefer the term Miaphysite to refer to themselves, a reference to Cyrillian Christology, which used the phrase "μία φύσις τοῦ θεοῦ λόγου σεσαρκωμένη", "mía phýsis toû theoû lógou sesarkōménē". The term miaphysis means one united nature as opposed to one singular nature (monophysis). Thus the Miaphysite position maintains that although the nature of Christ is from two, it may be referred to as one in its incarnate state because the natures always act in unity.

In recent times, leaders from the Eastern Orthodox and Oriental Orthodox Churches have signed joint statements in an attempt to work towards reunification. Likewise the leaders of the Assyrian Church of the East, which venerates Nestorius and Theodore, have in recent times signed a joint agreement with leaders of the Roman Catholic Church acknowledging that their historical differences were over terminology rather than the actual intended meaning.

In Kierkegaard's Philosophical Fragments, the dual nature of Christ is explored as a paradox, as "the ultimate paradox", because God, understood as perfectly good, perfectly wise, perfectly powerful being, fully became a human, in the Christian understanding of the term: burdened by sin, limited in goodness, knowledge, and understanding.[12] This paradox can only be resolved, Kierkegaard believed, by a leap of faith away from one's understanding and reason towards belief in God; thus the paradox of the hypostatic union was crucial to an abiding faith in the Christian God.