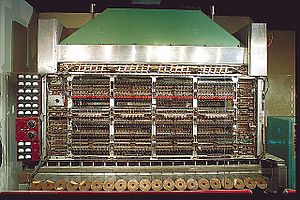 The IAS machine at the National Museum of American History

The IAS machine was the first electronic computer built at the Institute for Advanced Study (IAS), in Princeton, New Jersey, USA. It is sometimes called the von Neumann machine, since the paper describing its design was edited by John von Neumann, a mathematics professor at both Princeton University and IAS. The computer was built from late 1945 until 1951 under his direction.[1] The general organization is called Von Neumann architecture, even though it was both conceived and implemented by others.[2]

Julian Bigelow was hired as chief engineer in May 1946.[3] Hewitt Crane, Herman Goldstine, Gerald Estrin, Arthur Burks and Willis Ware also worked on the project.[4] The machine was in limited operation in the summer of 1951 and fully operational on June 10, 1952.[5]

The IAS machine was a binary computer with a 40-bit word, storing two 20-bit instructions in each word. The memory was 1024 words (5.1 kilobytes). Negative numbers were represented in "two's complement" format. It had two general-purpose registers available: the Accumulator (AC) and Multiplier/Quotient (MQ).

Although some claim the IAS machine was the first design to mix programs and data in a single memory, that had been implemented four years earlier by the 1948 Manchester Small Scale Experimental Machine.[7] Also MESM became operational prior to IAS machine.

The memory was originally designed for about 2300 RCA Selectron vacuum tubes. Problems with the development of these complex tubes forced the switch to Williams tubes.

Plans for the IAS machine were widely distributed to any schools, businesses, or companies interested in computing machines, resulting in the construction of several derivative computers referred to as "IAS machines," although they were not software compatible in the modern sense.[4]

Some of these "IAS machines" were: