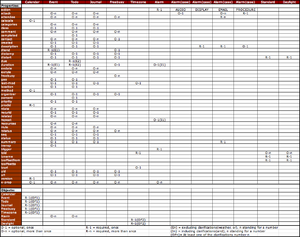 iCalendar components and their properties

Not to be confused with the Calendar application (previously named iCal).

iCalendar is a computer file format which allows Internet users to send meeting requests and tasks to other Internet users, via email, or sharing files with an extension of .ics. Recipients of the iCalendar data file (with supporting software, such as an email client or calendar application) can respond to the sender easily or counter-propose another meeting date/time.[1]

iCalendar is designed to be independent of the transport protocol. For example, certain events can be sent by traditional email or whole calendar files can be shared and edited by using a WebDav server, or SyncML. Simple web servers (using just the HTTP protocol) are often used to distribute iCalendar data about an event and to publish busy times of an individual. Publishers can embed iCalendar data in web pages using hCalendar, a 1:1 microformat representation of iCalendar in semantic (X)HTML.

iCalendar was created by the Internet Engineering Task Force Calendaring and Scheduling Working Group (chaired by Anik Ganguly of Open Text Corporation), and was authored by Frank Dawson of Lotus Development Corporation and Derik Stenerson of Microsoft Corporation. iCalendar is heavily based on the earlier vCalendar by the Internet Mail Consortium (IMC). iCalendar data files are plain text files with the extension .ics or .ifb (for files containing availability information only). RFC 5545 replaced RFC 2445 in September 2009 and now defines the standard.

The filename extension of ics is to be used for files containing calendaring and scheduling information, ifb for files with free or busy time information consistent with this MIME content type. The equivalent file type codes in Apple Macintosh operating system environments are iCal and iFBf.

By default, iCalendar uses the UTF-8 character set; a different character set can be specified using the "charset" MIME parameter (if the transport method used supports MIME, such as Email or HTTP).

Each line is terminated by CR+LF (in hexadecimal: 0D0A). Lines should be limited to 75 octets (not characters) long. Where a data item is too long to fit on a single line it can be continued on following lines by starting the continuation lines with a space character (in hex: 20) or a tab character (in hex: 09).

Actual line feeds in data items are encoded as a backslash followed by the letter n or N (the bytes 5C 6E or 5C 4E in UTF-8).

iCalendar is meant to "provide the definition of a common format for openly exchanging calendaring and scheduling information across the Internet". While the features most often used by users are widely supported by iCalendar, some more advanced capabilities have problems. For example, most vendors do not support Journals (VJOURNAL). "[R]ecurring and repeating meetings still have a bit of mystery and ambiguity associated with them. Resulting in no true interoperability between the current calendaring and scheduling vendors."[5] VTODOs have had conversion problems as well.[6]

iCalendar's calendar is also not compatible with some non-Gregorian calendars such as the lunar calendars used in Israel or Saudi Arabia.[7]

The memo "Calendar Access Protocol" (RFC 4324) was an initial attempt at a universal system to create real-time calendars. This protocol was eventually abandoned, possibly because of excessive complexity. Regardless, iCalendar-based code such as GroupDAV and CalDAV are now being used more frequently in both client and server software packages.

The IETF "Calendaring and Scheduling Working Group" (ietf-calsify WG) has published additional proposed revisions to the iCalendar standards[8] (as RFC-drafts/"Proposed"),[9] but as of January 2011, the group has 'ended'.[10] Much of their work focused on clarifications to the previous standards, and was apparently influenced on work by the Calendaring and Scheduling Consortium (a.k.a. CalConnect[11])

There are many different types of components which can be used in iCalendar, as described below.[13]

VEVENT describes an event, which has a scheduled amount of time on a calendar. Normally, when a user accepts the calendar event, this will cause that time to be considered busy.[14] A VEVENT may include a VALARM which allows an alarm. Such events have a DTSTART which sets a starting time, and a DTEND which sets an ending time. If the calendar event is recurring, DTSTART sets up the start of the first event.

A VALARM code (reminder 1 day before) :

VEVENT also is used for calendar events without a specific time, such as anniversaries and daily reminders.[15] If you need to send in a cancellation for an event, the UID should be same as the original event, and the component properties should be set to cancel Ex.

For sending an UPDATE for an event the UID should match the original UID. the other component property to be set is:

I.e., for the first update:

In Microsoft Outlook, the SUMMARY corresponds to the "Subject" entry in the "Appointment" form, and DESCRIPTION to the descriptive text below it. In addition, Outlook 2002 and Outlook 2003 demand a UID and a DTSTAMP.

VTODO explains a to-do item, i.e., an action-item or assignment.

Not all calendar applications recognize VTODO items. In particular, Outlook does not export Tasks as VTODO items, and ignores VTODO items in imported calendars.[16]

The following is an example of a to-do due on April 15, 1998.[17] An audio alarm has been specified to remind the calendar user at noon, the day before the to-do is expected to be completed and repeat hourly, four additional times. The SEQUENCE element shows this to-do has been modified twice since it was initially created.

VJOURNAL is a journal entry. They attach descriptive text to a particular calendar date, may be used to record a daily record of activities or accomplishments, or describe progress with a related to-do entry. A "VJOURNAL" calendar component does not take up time on a calendar, so it has no effect on free or busy time (just like TRANSPARENT entries). In practice, few programs support VJOURNAL entries, although examples exist: Plum Canary's Chirp software uses VTODO and VJOURNAL together. Also KOrganizer from the KDE desktop and Evolution from the GNOME desktop support VJOURNAL.

The following is an example of a journal entry:[12]

(Note: This example is taken from RFC 2445 with the correction of changing the word 'CATEGORY' to 'CATEGORIES', which is a mistake in the original RFC)

VFREEBUSY is a request for free/busy time, is a response to a request, or is a published set of busy time.[clarification needed] [18]

The following is an example of published busy time information:[19]

The UID field distributes updates when a scheduled event changes. When the event is first generated a globally unique identifier is created. If a later event is distributed with the same UID, it replaces the original one.[21]

vCalendar and iCalendar support private software extensions, with a "X-" prefix, a number of which are in common usage.

Some of these include:

iCalendar's design was based on the previous file format vCalendar created by the Internet Mail Consortium (IMC).[22]

Here is an example of information in vCalendar format:

It has the .vcs file extension. After iCalendar was released, the Internet Mail Consortium stated that it "hopes that all vCalendar developers take advantage of these new open standards and make their software compatible with both vCalendar 1.0 and iCalendar."[23]