The IEEE Standard for Floating-Point Arithmetic (IEEE 754) is a technical standard for floating-point computation established in 1985 by the Institute of Electrical and Electronics Engineers (IEEE). Many hardware floating point units use the IEEE 754 standard. The standard addressed many problems found in the diverse floating point implementations that made them difficult to use reliably and portably. The current version, IEEE 754-2008 published in August 2008, includes nearly all of the original IEEE 754-1985 standard and the IEEE Standard for Radix-Independent Floating-Point Arithmetic (IEEE 854-1987). The international standard ISO/IEC/IEEE 60559:2011 (with content identical to IEEE 754-2008) has been approved for adoption through JTC1/SC 25 under the ISO/IEEE PSDO Agreement[1] and published.[2]

The standard is derived from and replaces IEEE 754-1985, the previous version, following a seven-year revision process, chaired by Dan Zuras and edited by Mike Cowlishaw. The binary formats in the original standard are included in the new standard along with three new basic formats (one binary and two decimal). To conform to the current standard, an implementation must implement at least one of the basic formats as both an arithmetic format and an interchange format.

As of September 2015, the standard is being revised to incorporate clarifications and errata.[3][4]

An IEEE 754 format is a "set of representations of numerical values and symbols". A format may also include how the set is encoded.

The possible finite values that can be represented in a format are determined by the base b, the number of digits in the significand (precision p), and the exponent parameter emax:

Zero values are finite values with significand 0. These are signed zeros, the sign bit specifies if a zero is +0 (positive zero) or −0 (negative zero).

Representation and encoding in memory

For the decimal formats, any representation is valid, and the set of these representations is called a cohort. When a result can have several representations, the standard specifies which member of the cohort is chosen.

The standard also defines interchange formats, which generalize these basic formats.[5] For the binary ones, the leading bit convention is required. The following table summarizes the smallest interchange formats (including the basic ones).

Note that in the table above, the minimum exponents listed are for normal numbers; the special subnormal number representation allows even smaller numbers to be represented (with some loss of precision). For example, the smallest double-precision number greater than zero that can be represented in that form is 2−1074 (because 1074 = 1022 + 53 − 1).

Decimal digits is digits × log10 base, this gives an approximate precision in decimal.

Decimal E max is Emax × log10 base, this gives the maximum exponent in decimal.

As stated previously, the binary32 and binary64 formats are identical to the single and double formats respectively of IEEE 754-1985 and are two of the most common formats used today. The figure below shows the absolute precision for both the binary32 and binary64 formats in the range of 10−12 to 10+12. Such a figure can be used to select an appropriate format given the expected value of a number and the required precision. 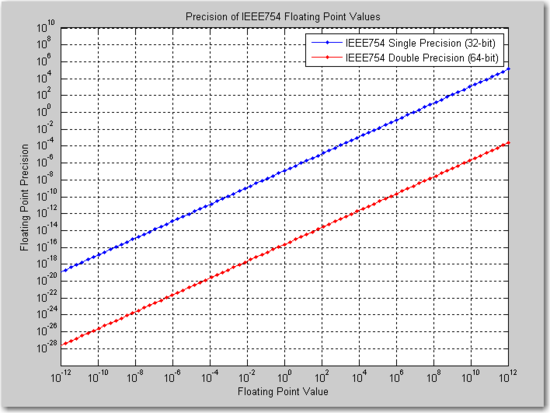 The standard specifies extended and extendable precision formats, which are recommended for allowing a greater precision than that provided by the basic formats.[7] An extended precision format extends a basic format by using more precision and more exponent range. An extendable precision format allows the user to specify the precision and exponent range. An implementation may use whatever internal representation it chooses for such formats; all that needs to be defined are its parameters (b, p, and emax). These parameters uniquely describe the set of finite numbers (combinations of sign, significand, and exponent for the given radix) that it can represent.

The standard does not require an implementation to support extended or extendable precision formats.

The standard recommends that languages provide a method of specifying p and emax for each supported base b.[8]

The standard recommends that languages and implementations support an extended format which has a greater precision than the largest basic format supported for each radix b.[9]

Interchange formats are intended for the exchange of floating-point data using a fixed-length bit-string for a given format.

For the exchange of binary floating-point numbers, interchange formats of length 16 bits, 32 bits, 64 bits, and any multiple of 32 bits ≥128 are defined. The 16-bit format is intended for the exchange or storage of small numbers (e.g., for graphics).

The encoding scheme for these binary interchange formats is the same as that of IEEE 754-1985: a sign bit, followed by w exponent bits that describe the exponent offset by a bias, and p−1 bits that describe the significand. The width of the exponent field for a k-bit format is computed as w = round(4 log2(k))−13. The existing 64- and 128-bit formats follow this rule, but the 16- and 32-bit formats have more exponent bits (5 and 8) than this formula would provide (3 and 7, respectively).

As with IEEE 754-1985, there is some flexibility in the encoding of signaling NaN.

For the exchange of decimal floating-point numbers, interchange formats of any multiple of 32 bits are defined.

The encoding scheme for the decimal interchange formats similarly encodes the sign, exponent, and significand, but two different bit-level representations are defined. Interchange is complicated by the fact that some external indicator of the representation in use is required. The two options allow the significand to be encoded as a compressed sequence of decimal digits (using densely packed decimal) or alternatively as a binary integer. The former is more convenient for direct hardware implementation of the standard, while the latter is more suited to software emulation on a binary computer. In either case the set of numbers (combinations of sign, significand, and exponent) that may be encoded is identical, and special values (±zero, ±infinity, quiet NaNs, and signaling NaNs) have identical binary representations.

The standard defines five rounding rules. The first two round to a nearest value; the others are called directed roundings:

Required operations for a supported arithmetic format (including the basic formats) include:

The standard provides a predicate totalOrder which defines a total ordering for all floating numbers for each format. The predicate agrees with the normal comparison operations when they say one floating point number is less than another. The normal comparison operations however treat NaNs as unordered and compare −0 and +0 as equal. The totalOrder predicate will order these cases, and it also distinguishes between different representations of NaNs and between the same decimal floating point number encoded in different ways.[17]

The standard defines five exceptions, each of which returns a default value and has a corresponding status flag that (except in certain cases of underflow) is raised when the exception occurs. No other exception handling is required, but additional non-default alternatives are recommended (see below).

The five possible exceptions are:

These are the same five exceptions as were defined in IEEE 754-1985, but the division by zero exception has been extended to operations other than the division.

For decimal floating point, there are additional exceptions along with the above:[21][22]

Additionally, operations like quantize when either operand is infinite, or when the result does not fit the destination format, will also signal invalid operation exception.[23]

Clause 9 in the standard recommends fifty operations, that language standards should define.[24] These are all optional (not required in order to conform to the standard).

Recommended arithmetic operations, which must round correctly:[25]

The asinPi, acosPi and tanPi functions are not part of the standard because the feeling was that they were less necessary.[26] The first two are mentioned in a paragraph, but this is regarded as an error.[27]

The operations also include setting and accessing dynamic mode rounding direction,[28] and implementation-defined vector reduction operations such as sum, scaled product, and dot product, whose accuracy is unspecified by the standard.[29]

The standard recommends how language standards should specify the semantics of sequences of operations, and points out the subtleties of literal meanings and optimizations that change the value of a result. By contrast the previous 1985 version of the standard left aspects of the language interface unspecified, which led to inconsistent behaviour between compilers, or different optimization levels in a single compiler.

Programming languages should allow a user to specify a minimum precision for intermediate calculations of expressions for each radix. This is referred to as "preferredWidth" in the standard, and it should be possible to set this on a per block basis. Intermediate calculations within expressions should be calculated, and any temporaries saved, using the maximum of the width of the operands and the preferred width, if set. Thus for instance a compiler targeting x87 floating point hardware should have a means of specifying that intermediate calculations must use doubled extended format. The stored value of a variable must always be used when evaluating subsequent expressions, rather than any precursor from before rounding and assigning to the variable.

The IEEE 754-1985 allowed many variations in implementations (such as the encoding of some values and the detection of certain exceptions). IEEE 754-2008 has strengthened up many of these, but a few variations still remain (especially for binary formats). The reproducibility clause recommends that language standards should provide a means to write reproducible programs (i.e., programs that will produce the same result in all implementations of a language), and describes what needs to be done to achieve reproducible results.

The original binary value will be preserved by converting to decimal and back again using:[31]

For other binary formats the required number of decimal digits is

where p is the number of significant bits in the binary format, e.g. 24 bits for binary32.

When using a decimal floating point format the decimal representation will be preserved using:

Algorithms, with code, for correctly rounded conversion from binary to decimal and decimal to binary are discussed in [32] and for testing in.[33]