From Infogalactic: the planetary knowledge core
Jump to: navigation, search
Not to be confused with IP Code-rated camera.

An Internet protocol camera, or IP camera, is a type of digital video camera commonly employed for surveillance, and which, unlike analog closed circuit television (CCTV) cameras, can send and receive data via a computer network and the Internet. Although most cameras that do this are webcams, the term "IP camera" or "netcam" is usually applied only to those used for surveillance. The first centralized IP camera was Axis Neteye 200, released in 1996 by Axis Communications.[1]

There are two kinds of IP cameras:

The first centralized IP camera was released in 1996 by Axis Communications.[2] It was called the Axis Neteye 200 and was developed by the team of Martin Gren and Carl-Axel Alm. It used a custom web server internal to the camera. In late 1999, the company started using embedded Linux to operate its cameras. Axis also released documentation for its low-level API called "VAPIX", which builds on the open standards of HTTP and real time streaming protocol (RTSP). This open architecture was intended to encourage third-party software manufacturers to develop compatible management and recording software.

The first IP camera with onboard video content analytics (VCA) was released in 2005 by Intellio.[citation needed] This camera was able to detect a number of different events, such as if an object was stolen, a human crossed a line, a human entered a predefined zone, or if a car moved in the wrong direction.

IP cameras are available at resolutions from 0.3 (VGA resolution) to 29 megapixels.[3] As in the consumer TV business, in the early 21st century, there has been a shift towards high-definition video resolutions, e.g. 720p or 1080i and 16:9 widescreen format. 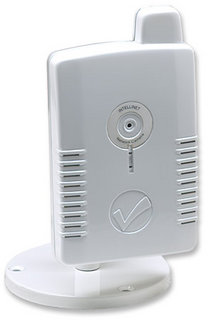 In order to address issues of standardization of IP video surveillance, two industry groups were formed in 2008: the Open Network Video Interface Forum (ONVIF) and the Physical Security Interoperability Alliance (PSIA). While the PSIA was founded by 20 member companies including Honeywell, GE Security and Cisco, and ONVIF was founded by Axis Communications, Bosch and Sony, each group now has numerous members. As of January 2009, each group had released version 1.0 of their specification.

Following is a list of non-brand specific IP camera software, for various platforms, which may or may not offer remote (web) monitoring: