From Infogalactic: the planetary knowledge core
Jump to: navigation, search
"Currency code" redirects here. It is not to be confused with Currency sign.
File:Flugschein.JPG
An airline ticket showing the price in the ISO 4217 code "EUR" (bottom left) and not the currency sign €

ISO 4217 is a standard published by International Organization for Standardization, which delineates currency designators, country codes (alpha and numeric), and references to minor units in three tables:

The tables, history and ongoing discussion are maintained by SIX Interbank Clearing on behalf of ISO and the Swiss Association for Standardization.[4]

The ISO 4217 code list is used in banking and business globally. In many countries the ISO codes for the more common currencies are so well known publicly that exchange rates published in newspapers or posted in banks use only these to delineate the different currencies, instead of translated currency names or ambiguous currency symbols. ISO 4217 codes are used on airline tickets and international train tickets to remove any ambiguity about the price. 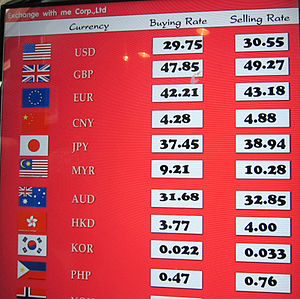 A list of exchange rates for various base currencies given by a money changer in Thailand, with the Thailand Baht as the counter (or quote) currency.

The first two letters of the code are the two letters of ISO 3166-1 alpha-2 country codes (which are also used as the basis for national top-level domains on the Internet) and the third is usually the initial of the currency itself. So Japan's currency code is JPY—JP for Japan and Y for yen. This eliminates the problem caused by the names dollar, franc and pound being used in dozens of different countries, each having significantly differing values. Also, if a currency is revalued, the currency code's last letter is changed to distinguish it from the old currency. In some cases, the third letter is the initial for "new" in that country's language, to distinguish it from an older currency that was revalued; the code sometimes outlasts the usage of the term "new" itself (for example, the code for the Mexican peso is MXN). Other changes can be seen, however; the Russian ruble, for example, changed from RUR to RUB, where the B comes from the third letter in the word "ruble".

In addition to codes for most active national currencies ISO 4217 provides codes for "supranational" currencies, procedural purposes, and several things which are "similar to" currencies:

The use of an initial letter "X" for these purposes is facilitated by the ISO 3166 rule that no official country code beginning with X will ever be assigned. Because of this rule ISO 4217 can use X codes without risk of clashing with a future country code. ISO 3166 country codes beginning with "X" are used for private custom use (reserved), never for official codes. For instance, the ISO 3166-based NATO country codes (STANAG 1059, 9th edition) use "X" codes for imaginary exercise countries ranging from XXB for "Brownland" to XXR for "Redland", as well as for major commands such as XXE for SHAPE or XXS for SACLANT. Consequently, ISO 4217 can use "X" codes for non-country-specific currencies without risk of clashing with future country codes.

The inclusion of EU (denoting the European Union) in the ISO 3166-1 reserved codes list, allows the euro to be coded as EUR rather than assigned a code beginning with X even though it is a supranational currency.

The ISO 4217 standard includes a crude mechanism for expressing the relationship between a major currency unit and its corresponding minor currency unit. This mechanism is called the currency "exponent" and assumes a base of 10. For example, USD (the United States dollar) is equal to 100 of its minor currency unit the "cent". So the USD has exponent 2 (10 to the power 2 is 100, which is the number of cents in a dollar). The code JPY (Japanese yen) is given the exponent 0, because its minor unit, the sen, although nominally valued at 1/100 of a yen, is of such negligible value that it is no longer used. Usually, as with the USD, the minor currency unit has a value that is 1/100 of the major unit, but in some cases (including most varieties of the dinar) 1/1000 is used, and sometimes ratios apply which are not integer powers of 10. Mauritania does not use a decimal division of units, setting 1 ouguiya (UM) equal to 5 khoums, and Madagascar has 1 ariary = 5 iraimbilanja. Some currencies do not have any minor currency unit at all and these are given an exponent of 0, as with currencies whose minor units are unused due to negligible value.

Position of ISO 4217 code in amounts

The ISO standard does not regulate either the spacing, prefixing or suffixing in usage of currency codes. According however to the European Union's Publication Office,[5] in English, Irish, Latvian and Maltese texts, the ISO 4217 code is to be followed by a fixed space and the amount:

Note that, as illustrated, the order is determined not by the currency, but by the native language of the document context.

Over time, new currencies are created and old currencies are discontinued. Frequently, these changes are due to the formation of new governments, treaties between countries standardizing on a shared currency, or revaluation of an existing currency due to excessive inflation. As a result, the list of codes must be updated from time to time. The ISO 4217 maintenance agency (MA), SIX Interbank Clearing, is responsible for maintaining the list of codes.

The following is a list of active codes of official ISO 4217 currency names.

USD/USS/USN, three currency codes belonging to the US

The US dollar has two codes assigned: USD and USN (next day). The USS (same day) code is not in use any longer, and was removed from the list of active ISO 4217 codes in March 2014.

8. In applications where monetary resources associated with a currency (i.e. funds) need not be specified and where a field identifier indicating currency is used, the first two (leftmost) characters are sufficient to identify a currency—example: US for United States dollars for general, unspecified purposes where a field identifier indicating currency is present. (A field identifier can be a preprinted field heading in an aligned document or a similarly-agreed application in electronic transmission of data.)
9. In applications where there is a need to distinguish between different types of currencies, or where funds are required as in the banking environment, or where there is no field identifier, the third (rightmost) character of the alphabetic code is an indicator, preferably mnemonic, derived from the name of the major currency unit or fund—example: USD for general, unspecified purposes; USN for United States dollar next-day funds, and USS for funds which are immediately available for Federal Reserve transfer, withdrawal in cash or transfer in like funds (same-day funds). Since there is no need for such a distinction in international trade applications, the funds codes have not been included in the Annex to the present Recommendation.

A number of currencies are not included in ISO 4217, because these currencies are: (a) minor currencies pegged 1:1 to a larger currency, even if independently regulated (b) a legal tender only issued as commemorative banknotes or coinage, or (c) a currency of an unrecognized or partially recognized state. These currencies include:

See Category:Fixed exchange rate for a list of all currently pegged currencies.

Despite the lack of an ISO code, the following non-ISO codes are sometimes used commercially.

In addition, GBX is sometimes used (for example on the London Stock Exchange) to denote Penny sterling, a subdivision of pound sterling, the currency for the United Kingdom.

A number of currencies were official ISO 4217 currency codes and currency names until their replacement by the euro or other currencies. The table below shows the ISO currency codes of former currencies and their common names (which do not always match the ISO 4217 names). These codes were introduced in 1989 after a request from the reinsurance sector in 1988 was accepted.