From Infogalactic: the planetary knowledge core
(Redirected from Icebergs)
Jump to: navigation, search
For other uses, see Iceberg (disambiguation). 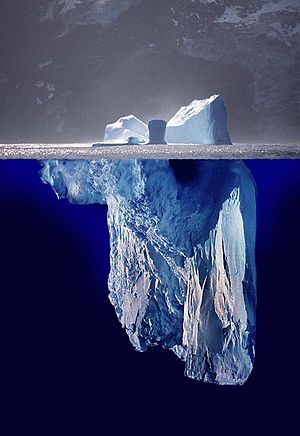 An artist's impression of an iceberg viewed from the side, with the majority underwater

An iceberg or ice mountain is a large piece of freshwater ice that has broken off a glacier or an ice shelf and is floating freely in open water.[1][2] It may subsequently become frozen into pack ice (one form of sea ice). As it drifts into shallower waters, it may come into contact with the seabed, a process referred to as seabed gouging by ice. 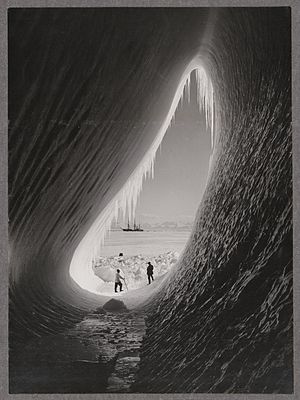 Because the density of pure ice is about 920 kg/m³, and that of seawater about 1025 kg/m³, typically only one-tenth of the volume of an iceberg is above water. The shape of the underwater portion can be difficult to judge by looking at the portion above the surface. This has led to the expression "tip of the iceberg", for a problem or difficulty that is only a small manifestation of a larger problem.

When a piece of iceberg ice melts, it makes a fizzing sound called "Bergie Seltzer". This sound is made when the water-ice interface reaches compressed air bubbles trapped in the ice. As this happens, each bubble bursts, making a 'popping' sound. The bubbles contain air trapped in snow layers very early in the history of the ice, that eventually got buried to a given depth (up to several kilometers) and pressurized as it transformed into firn then to glacial ice.[4]

Video of iceberg calving in Greenland, 2007 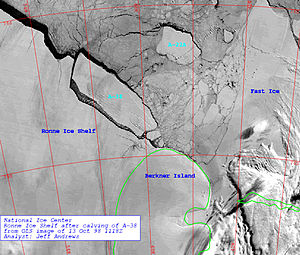 The calving of Iceberg A-38 off Ronne Ice Shelf

In addition to size classification, icebergs can be classified on the basis of their shape. The two basic types of iceberg forms are tabular and non-tabular. Tabular icebergs have steep sides and a flat top, much like a plateau, with a length-to-height ratio of more than 5:1.[12] This type of iceberg, also known as an ice island,[13] can be quite large, as in the case of Pobeda Ice Island. Antarctic icebergs formed by breaking off from an ice shelf, such as the Ross Ice Shelf or Filchner-Ronne Ice Shelf, are typically tabular. The largest icebergs in the world are formed this way.

Non-tabular icebergs have different shapes and include:[14]

Acoustic monitoring of an iceberg.

Icebergs are monitored worldwide by the U.S. National Ice Center (NIC), established in 1995, which produces analyses and forecasts of Arctic, Antarctic, Great Lakes and Chesapeake Bay ice conditions. More than 95% of the data used in its sea ice analyses are derived from the remote sensors on polar-orbiting satellites that survey these remote regions of the Earth. 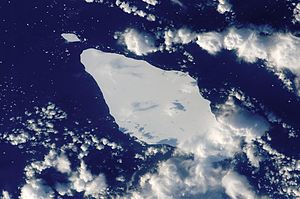 The NIC is the only organization that names and tracks all Antarctic Icebergs. It assigns each iceberg larger than 10 nautical miles (19 km) along at least one axis a name composed of a letter indicating its point of origin and a running number. The letters used are as follows:[15]

Iceberg B15 calved from the Ross Ice Shelf in 2000 and initially had an area of 11,000 square kilometres (4,200 sq mi). It broke apart in November 2002. The largest remaining piece of it, Iceberg B-15A, with an area of 3,000 square kilometres (1,200 sq mi), was still the largest iceberg on Earth until it ran aground and split into several pieces October 27, 2005, an event that was observed by seismographs both on the iceberg and across Antarctica.[16] It has been hypothesized that this breakup may also have been abetted by ocean swell generated by an Alaskan storm 6 days earlier and 13,500 kilometres (8,400 mi) away.[17][18] 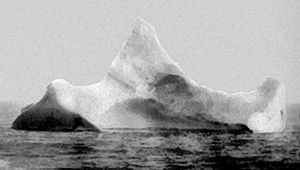 The iceberg suspected of sinking the RMS Titanic; a smudge of red paint much like the Titanic's red hull stripe was seen near its base at the waterline.

In the 20th century, several scientific bodies were established to study and monitor the icebergs. The International Ice Patrol, formed in 1914 in response to the April 1912 Titanic disaster, monitors iceberg dangers near the Grand Banks of Newfoundland and provides the "limits of all known ice" in that vicinity to the maritime community.

Before the early 1910s there was no system in place to track icebergs to guard ships against collisions. The April 1912 sinking of the RMS Titanic, which caused the deaths of 1,517 of its 2,223 passengers, also created the demand for a system to observe icebergs. For the remainder of the ice season of that year, the United States Navy patrolled the waters and monitored ice flow. In November 1913, the International Conference on the Safety of Life at Sea met in London to devise a more permanent system of observing icebergs. Within three months the participating maritime nations had formed the International Ice Patrol (IIP). The goal of the IIP was to collect data on meteorology and oceanography to measure currents, ice-flow, ocean temperature, and salinity levels. They published their first records in 1921, which allowed for a year-by-year comparison of iceberg movement.

New technologies monitor icebergs. Aerial surveillance of the seas in the early 1930s allowed for the development of charter systems that could accurately detail the ocean currents and iceberg locations. In 1945, experiments tested the effectiveness of radar in detecting icebergs. A decade later, oceanographic monitoring outposts were established for the purpose of collecting data; these outposts continue to serve in environmental study. A computer was first installed on a ship for the purpose of oceanographic monitoring in 1964, which allowed for a faster evaluation of data. By the 1970s, icebreaking ships were equipped with automatic transmissions of satellite photographs of ice in Antarctica. Systems for optical satellites had been developed but were still limited by weather conditions. In the 1980s, drifting buoys were used in Antarctic waters for oceanographic and climate research. They are equipped with sensors that measure ocean temperature and currents. 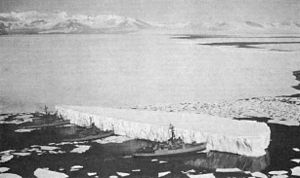 An iceberg being pushed by three U.S. Navy ships in McMurdo Sound, Antarctica

Side looking airborne radar (SLAR) made it possible to acquire images regardless of weather conditions. On November 4, 1995, Canada launched RADARSAT-1. Developed by the Canadian Space Agency, it provides images of Earth for scientific and commercial purposes. This system was the first to use synthetic aperture radar (SAR), which sends microwave energy to the ocean surface and records the reflections to track icebergs. The European Space Agency launched ENVISAT (an observation satellite that orbits the Earth's poles)[19] on March 1, 2002. ENVISAT employs advanced synthetic aperture radar (ASAR) technology, which can detect changes in surface height accurately. The Canadian Space Agency launched RADARSAT-2 in December 2007, which uses SAR and multi-polarization modes and follows the same orbit path as RADARSAT-1.[20]